Most discussions about investing in Tesla (NASDAQ:TSLA) focus on the eye-popping number of electric vehicles or EVs the company must make to justify its current stock price. And even the most optimistic assessments paint a fairly long road ahead for the company’s EV production to catch up to its current valuation. But […]

Most discussions about investing in Tesla (NASDAQ:TSLA) focus on the eye-popping number of electric vehicles or EVs the company must make to justify its current stock price. And even the most optimistic assessments paint a fairly long road ahead for the company’s EV production to catch up to its current valuation. But the company is also a leader in energy storage, or batteries, a business that gets much less attention from analysts. Tesla’s upcoming “Battery Day Event” on Sept. 22nd, 2020, will undoubtedly be packed with lots of goodies about its latest advances in battery technology. And understanding Tesla’s storage business may shed some light on how to value the company.

Tesla’s main business at this time is its EVs and related services, accounting for close to 93% of its revenue dollars during Q2 2020. Tesla’s mission statement, however, says nothing about cars, trucks or even transportation. Its mission is to “accelerate the world’s transition to sustainable energy.”

For some time now, Tesla’s CEO Elon Musk has been saying that he feels there is a general lack of appreciation for Tesla Energy’s business, announcing that he expects Tesla’s energy business to be of “roughly the same size” as Tesla’s automotive business in the long term. And he reiterated this sentiment during the company’s Q2 2020 earnings call. Bringing its energy business to revenue parity with its automotive business would bring how many EVs Tesla has to make to justify its valuation from eye-popping to, well, just a very, very large number — but perhaps a bit more achievable. For now, however, Tesla’s energy business only brought in $1.5 billion in sales for fiscal year 2019 — roughly 6% of its $24.6 billion in overall revenue.

Given that $1.5 billion in revenue, Tesla’s energy business is not exactly tiny, but it is much smaller than it used to be. This business is made up of its rooftop solar installation operations, which it acquired from SolarCity in late 2016, and sales of its energy storage systems — the batteries that provide standby power for homes, businesses, and utilities.

SolarCity’s solar business essentially collapsed under Tesla, going from about 40% share of the US market pre-acquisition, to about 5% by the end of 2019. The reasons are plenty, but mostly its solar products have lacked a competitive edge. Its Solar Roof rollout has been delayed multiple times and, perhaps for this reason, the company just hasn’t seemed very focused on rooftop solar. Recently, though, the company announced it was dropping prices for its solar systems 30% below the industry average. As a main driver of solar adoption, price should help return Tesla’s solar business back to growth.

While Tesla’s solar business has sunk, however, its energy storage business has grown. The chart below shows how these two businesses have performed since Q4 2016: The chart shows that Tesla’s deployments of storage grew at roughly 100% compounded annual growth rate, or CAGR, while its solar deployments decreased by -42% each year. Storage deployments grew 61% from Q1 2020 to Q2 2020 alone.  And in late Aug. 2020, Tesla announced it had begun construction of the world’s largest energy storage project in partnership with California’s PG&E, solidifying Tesla place as a top storage provider for the growing market segment of utility-scale applications, according to a report from Navigant Research.

The company’s momentum in energy storage, its product leadership in the space, its investments into research and development of new battery chemistries, and its investments in its multibillion-dollar Gigafactories make storage a stronger candidate than solar to eventually compare in revenue with its automotive business.

Can Tesla’s energy business get there?

Tesla needs to grow its energy business’ revenue more than 15-fold from today’s numbers to realize Musk’s vision of automotive parity. If anything, as its automotive business continues to grow, its energy business would need to keep pace, needing to grow beyond 15 times larger in the next few years. That sounds like a very steep climb — until one looks at the projected growth of rooftop solar in the US market, and the pace at which utilities throughout the world are adding storage to their fleets.

The residential solar market in the US is expected to grow by roughly 50% in the next five years. Energy storage pairings with solar, on the other hand, are expected to grow more than 500% from current levels over the same time period. If Tesla can simply double its share of the residential solar market, and keep up with demand for paired storage, it could quickly begin to close the current revenue gap with its automotive sales. It could enjoy further growth from utility storage, a segment that is expected to grow even faster than residential storage, with the leading utilities across the US announcing new storage goals and significant projects on a consistent basis.

Fools wondering whether to add Tesla to their portfolios at its current valuation would do well to pay attention to the company’s upcoming “Battery Day Event.” Keep an eye on how any new battery breakthroughs apply not only to its EVs, but also to its energy storage products. Longer-life batteries at significantly lower costs would be an excellent start. Some way for the energy storage business to leverage Tesla’s ongoing investments into manufacturing EV batteries would be even better.

A significant edge in energy storage could give Tesla what it needs to accelerate the growth of its energy business, and create a clearer path for the company to justify its lofty valuation.

Sun Oct 4 , 2020
Technavio has been monitoring the smartphone market and it is poised to grow by 64.05 mn units during 2020-2024, progressing at a CAGR of almost 1% during the forecast period. The report offers an up-to-date analysis regarding the current market scenario, latest trends and drivers, and the overall market environment. […] 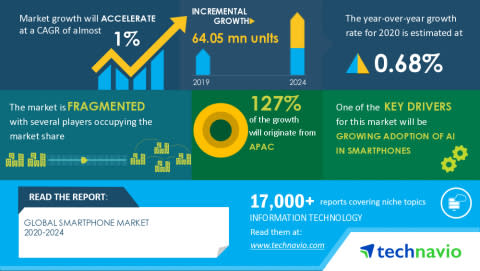