The first tranche of 7,900 rural homes under the National Broadband Plan (NBP) will be ‘passed’ and ready for high-speed fibre within the next 10 weeks, according to Communications Minister Eamon Ryan and National Broadband Ireland (NBI) officials. We’re not expecting any delay,” Mr Ryan told the Irish Independent yesterday. […]

The first tranche of 7,900 rural homes under the National Broadband Plan (NBP) will be ‘passed’ and ready for high-speed fibre within the next 10 weeks, according to Communications Minister Eamon Ryan and National Broadband Ireland (NBI) officials.

The first homes reached under the plan will be in Cork, Galway and Cavan.

Asked about discussions with National Broadband Ireland to speed up the seven- year, €2.1bn rollout schedule, Mr Ryan said he was hopeful.

“Those discussions are going well because we’re all on the same page,” he said.

“There were some delays because of Covid. Getting contractors in from the UK and elsewhere was difficult. But a lot of the work is ongoing. We hope we can catch up with any time lost due to Covid limitations. We’ll start going into people’s homes by the end of this year.”

Last month, the chairman of National Broadband Ireland, David McCourt, said that the extensive rollout plan to 540,000 rural homes and businesses might be finished within five years, instead of seven.

“Hopefully we’ll get it done in five years,” he told a Reuters podcast. “Originally it was a ten-year project, then it was a seven-year project and now, because of Covid, they [the Irish Government] want to make it a five-year project.”

Department of Communications officials say that at least some of the 7,900 rural homes passed will be able to buy NBP-based fibre broadband packages from existing retailers before the end of 2020.

Despite the NBP relying heavily on Eir’s rural network of poles, Mr Ryan said that ESB infrastructure was also being actively considered.

“A lot of the current work is surveying – going around every single road, looking at whether to use a telephone pole or an ESB pole. We also have to look at what the best way to get into a property is. But that survey work is proceeding rapidly.”

Mr McCourt described progress on the rollout schedule as “excellent”.

“Today, our teams are working across 23 counties and we’ve surveyed over 98,000 premises, which involves physically walking the routes where fibre will be laid,” he said.

Mr Ryan and Mr McCourt were talking as the first 50 ‘broadband connection points’ in rural areas were launched. The hotspots, which will number 300 by the end of next year, provide free wifi within 50 metres of the location, typically a sports club, administration centre or other community facility in an isolated area.

Announced as a parallel scheme with the National Broadband Plan, the hotspots are intended as a stopgap for those living in some of the most isolated and rural communities in the country, including islands off the coast of Donegal, Kerry, Mayo, Galway and Cork.

Sat Oct 10 , 2020
The global smart kitchen appliance market size is poised to grow by USD 6.16 billion during 2020-2024, progressing at a CAGR of over 9% throughout the forecast period, according to the latest report by Technavio. The report offers an up-to-date analysis regarding the current market scenario, latest trends and drivers, […] 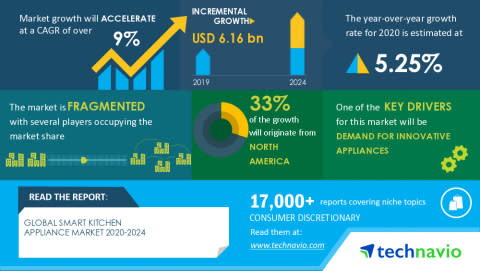