Finding a GeForce RTX 3080 or GeForce RTX 3090 in stock and at MSRP (or thereabouts) is virtually impossible at the moment, and NVIDIA warns that demand is likely to exceed supply into next year. Bummer. However, it is a different situation if buying a pre-built PC. Case in point, […]

Finding a GeForce RTX 3080 or GeForce RTX 3090 in stock and at MSRP (or thereabouts) is virtually impossible at the moment, and NVIDIA warns that demand is likely to exceed supply into next year. Bummer. However, it is a different situation if buying a pre-built PC. Case in point, Dell just upgraded its Alienware Aurora R11 and Aurora Ryzen Edition R10 gaming desktops with GeForce RTX 30 series GPU options.

The GPUs are custom variants by Dell, with its own designed cooling scheme featuring 10mm copper heatpipes, vapor chambers, and dual axial fans. That also means they look a bit different than a typical Founders Edition model, or even most third-party versions. Not that the aesthetic really matters here, because the Aurora desktops do not come with transparent side windows—you can’t see inside them unless you open them up.

Opting for a GeForce RTX 3080 means having to also upgrade the baseline 550W PSU option to 1,000W, in Dell’s configuration page. The least expensive configuration we came up with was $2,116.79 (before any coupon codes that might be out there), which gets you the following parts…
We would suggest going with the Killer Wi-Fi 6 (802.11ax) / Bluetooth 5.1 upgrade option for $19.60 extra, and a bigger storage drive. Fortunately, the storage upgrades are somewhat reasonable. For example, you could double the SSD to 512GB for $49. If you want to go for a GeForce RTX 3090, however, you are looking at spending an extra $784, bringing the tally to $2,900.79 (before the aforementioned upgrades).
Configuring a Ryzen build around a GeForce RTX 3080 costs about the same. For $2,136.39, you get a similar configuration as above, but with a Ryzen 7 3700X processor and a 512GB NVMe SSD (no hard drive). 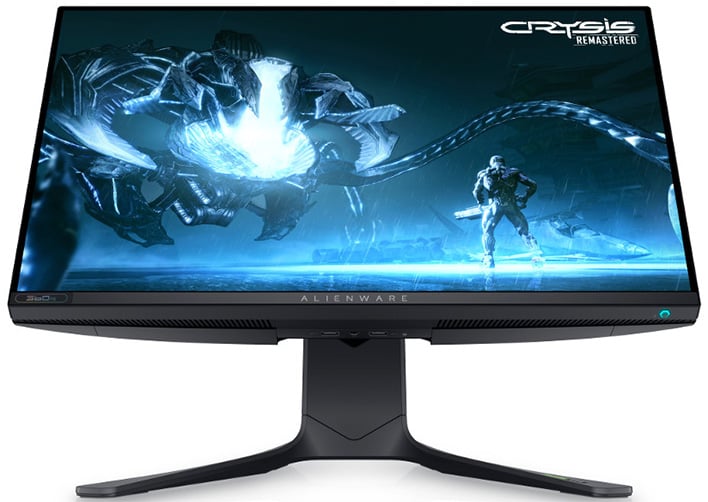 Dell also rolled out some new monitors. Shown above is the Alienware 25 Gaming Monitor (AW2521H). It sports a 24.5-inch IPS screen with a 1ms response time and wicked fast 360Hz refresh rate, so long as you connect it via DisplayPort. Otherwise, the refresh rate tops out at 240Hz over HDMI.

This is a G-Sync monitor that also supports NVIDIA’s Reflex latency tool, so it can analyze and display the mouse click latency on supported GPUs. It launches in November for $899.99.

Finally, Dell announced the Alienware 38 Gaming Monitor, the biggest of the bunch and also curved, with a 37.5-inch IPS screen and 3840×1600 resolution (21:9 aspect ratio). It is also a G-Sync Ultimate display with DisplayHDR 600 certification. Look for this one in November as well, priced at $1,899.99.