That paycheck usually gives about $1,500 per year to the category, which is lumped in with appliances by the U.S. Census research team. That accounts for 2.3 percent of all consumer retail spend. Of course, one device purchase – such as a smartphone, gaming system or laptop – can pressure that spend. But outside of the high-profile products, such as the tablet and connected home TV, the electronics category is actually full of lesser products and accessories.

For example, Amazon’s list of bestsellers is dominated by its own products, such as the Echo speaker, Fire TV Stick and Ring video doorbell. In fact, the first high-ticket item doesn’t show up until No. 6 on the best-seller chart (Nintendo Switch). Walmart’s electronics list is dominated by HDMI cables and Microsoft Surface devices.

For eCommerce, Americans spend about $617 a year in the electronics and appliance categories, which accounts for the highest percentage of spend at 23.3 percent, just four points ahead of clothing and apparel and two points ahead of sporting goods, hobby, music and books. When it comes to the battle between Bentonville and Seattle, Amazon is taking the lion’s share of this category, according to an exclusive PYMNTS data analysis.

The dichotomy could be explained by looking at two companies: Apple and Best Buy. Apple is notoriously controlling of its product pricing and display. That means it doesn’t fit into Walmart’s everyday low price model – but it does fit Amazon, which doesn’t have to use it as a loss leader. It’s telling that Microsoft apparently sees Walmart as a good fit for the Surface, which is priced at around $399 depending on the model. The MacBook Air, by comparison, sells for $999 on Amazon as well as in the Apple Store.

The Best Buy issue is more complicated. Its combination of eCommerce and in-store service has enabled it to stay profitable and to focus on higher-ticket products. It has also been reasonably Amazon and Walmart-proof, with many estimates putting its market share at around 15 percent of the electronics and appliance business. According to stock analysis site Trefis, Best Buy has been thriving during the pandemic, with strong sales of computing equipment, tablets and appliances.

“However, these weaker categories are expected to rebound big time moving into next year. Best Buy stands to benefit from Apple’s launch of 5G iPhones,” the site says. “In addition, Microsoft and Sony are also expected to launch their next-generation gaming consoles by the end of this year. Overall, we believe Best Buy can stay relevant in an Amazon-dominated market, and the brick-and-mortar retailer’s stock price, at levels of around $107, provides a buying opportunity for investors willing to be patient.”

The Strange Case of Walmart+ Numbers

As Walmart rolled out its new subscription service on Sept. 15, no one could fault the retailer for putting the full weight of its brand behind Walmart+. It has spent millions on TV spots on high-profile properties like the NFL, and seemed to be doing everything it could to drive signups.

The company is not yet stating how successful the launch has been. But according to a Piplsay project that counted over 20,000 online responses, 11 percent of all Americans have already signed up for Walmart+. That would mean that since Sept. 15, 36 million people parted with either $98 per year or $12.95 a month for grocery delivery, scan-and-go payment options and fuel discounts. By comparison, Amazon’s Prime subscription counts about 112 million people, according to several  published reports. It’s not known how many subscribers Amazon adds per quarter or per Prime Day event.

PYMNTS’ analysis of the “subscriptions and other” revenue includes Prime revenue, co-branded credit card fees and advertising services. That line has gone from $7 billion in 2016 to $27 billion in 2019. Again, it’s impossible to know how the revenue breaks down, particularly since Amazon took $87 billion off the table for ad revenue in 2019. Ad services are not the same as ad revenue, accounting for the seeming discrepancy between the $27 billion for services and $87 billion for revenue.

The Piplsay website didn’t list many details on methodology, saying only that it collected more than 20,000 online responses to its survey on Sept. 27-28. On the Amazon side, the most reliable numbers have come from Consumer Intelligence Research Partners, which has posted the 112 million number several times without drawing a rebuke from Amazon. Its most recent research says that Amazon added seven million Prime members in the second half of 2019.

If Walmart+ did attract 33 million signups, that NFL campaign has seen an amazing return on investment.

Banks, corporates and even regulators now recognize the imperative to modernize — not just digitize —the infrastructures and workflows that move money and data between businesses domestically and cross-border. Together with Visa, PYMNTS invites you to a month-long series of livestreamed programs on these issues as they reshape B2B payments. Masters of modernization share insights and answer questions during a mix of intimate fireside chats and vibrant virtual roundtables.

A COVID-19 vaccine will trigger a stock-market rotation into these 7 sectors, Goldman Sachs financial adviser says

Sat Oct 3 , 2020
A researcher works on a vaccine against the new coronavirus COVID-19 at the Copenhagen’s University research lab in Copenhagen, Denmark, on March 23, 2020. THIBAULT SAVARY/AFP via Getty Images Goldman Sachs’ Erin Riley said the announcement of a COVID-19 vaccine will trigger a stock-market rotation into sectors that have […] 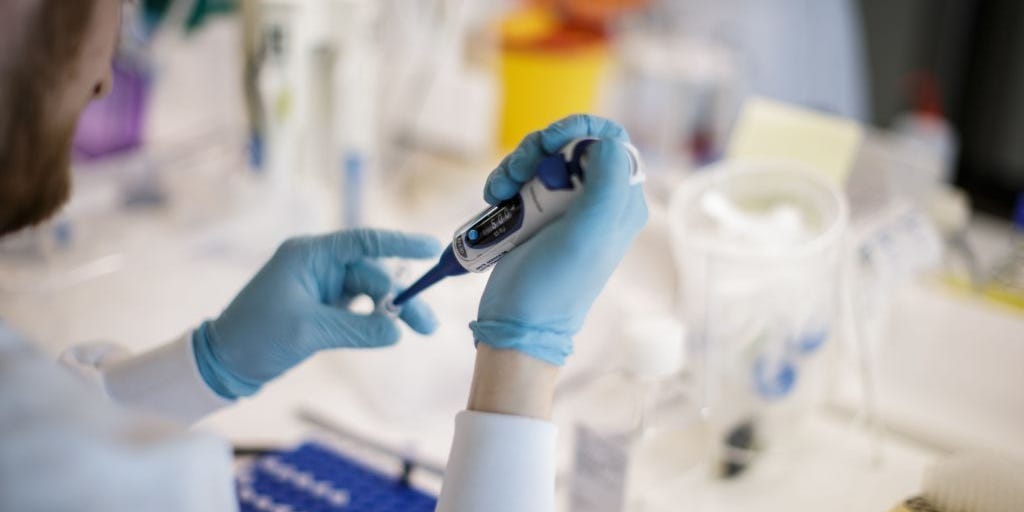