As promised, AMD is preparing to launch its next generation of Ryzen CPUs. These chips have the Zen 3 architecture, which reuses a lot of what makes the Zen 2 so speedy. But AMD’s engineers have made revisions that should lead to a significant performance gain. In a presentation today, […]

As promised, AMD is preparing to launch its next generation of Ryzen CPUs. These chips have the Zen 3 architecture, which reuses a lot of what makes the Zen 2 so speedy. But AMD’s engineers have made revisions that should lead to a significant performance gain. In a presentation today, AMD chief executive officer Lisa Su claimed that Zen 3 is 19% faster than the previous generation across a wide variety of workloads. I’ll test it to see if that’s the case, but AMD seems confident.

But AMD likely feels confident in pushing up the price because of the capabilities of its CPUs. The Ryzen chips have consistently had better multi-threaded performance than Intel’s processors. But the Intel Core CPUs always held strong in single-threaded performance, which is more important when it comes to games. Now, AMD claims it has closed that gap and even surpassed its competition.

“Our commitment with each generation of our Ryzen processors has been to build the best PC processors in the world,” AMD client business boss Saeid Moshkelani said. “The new AMD Ryzen 5000-series processors extend our leadership from [instructions per clock], power efficiency, to single-core and multi-core performance, and gaming.”

The gaming performance of chips like the Ryzen 5900X are impressive. At 1080p, AMD claims it’s faster than the i9-10900K in a suite of games with only one exception. And while Battlefield V performs 3% faster on Intel’s equivalent CPU, the 5900X was 5% faster in PlayerUnknown’s Battlegrounds, which is notoriously reliant on single-threaded performance. 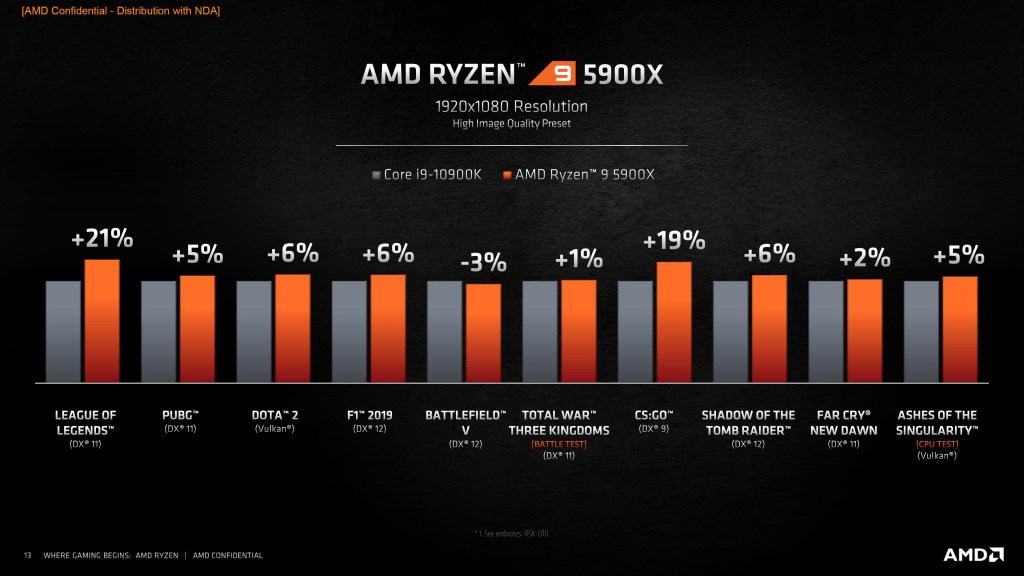 If you’re wondering why these tests are at 1080p instead of 4K, that’s just the nature of comparing CPUs. At 4K, the GPU would act as the bottleneck, and that doesn’t help you figure out which CPU is better. Of course, that also speaks to emphasizing the importance of prioritizing a GPU in any real-world gaming system.

But if these numbers hold true, they should help AMD get away with gently pushing prices up across its product lineup.

The Ryzen 5900X, 5800X, and 5600X are all $50 more than their previous-generation counterparts. On top of that, AMD is no longer including a cooler with the -900X or -800X parts. This enables AMD to boost its profit margins by saving money and raising the price.

I speculated that this is how AMD would proceed when it released the slightly improved XT Zen 2 CPUs in July without coolers.

But after multiple generations of huge investments in research and development, it isn’t surprising to see AMD looking to maximize profits. After all, the only thing that can really keep prices down in a market is competition.

Online and tele-counselling services to seek mental health support from

Sat Oct 10 , 2020
The Covid-19 outbreak has adversely affected the psychological health of many people. From tiny to major crises, people need emotional and mental health support to deal with anxieties, loneliness, frustration and suicidal thoughts more than ever. Online and tele-counselling services these days are more sought out options for people with […]