© Provided by The Financial Express Considering the increasing amount of e-waste being created every year across the world, Apple has pledged to make its production more environment friendly. Apple lawsuit: Smartphone giant Apple has decided to sue GEEP Canada, its former recycling partner. Apple has claimed that GEEP Canada, […]


© Provided by The Financial Express
Considering the increasing amount of e-waste being created every year across the world, Apple has pledged to make its production more environment friendly.

Apple lawsuit: Smartphone giant Apple has decided to sue GEEP Canada, its former recycling partner. Apple has claimed that GEEP Canada, which is now a part of Quantum Lifecycle Partners, stole and resold over 1.03 lakh Apple products, including iPhones, iPads and Apple Watches, all of which it was supposed to disassemble. The complaint by Apple states that a minimum of 11,766 pounds (over 5,300 kg) of Apple products went out of GEEP Canada’s premises even though they had not been destroyed. The tech giant also stated that this fact was confirmed by GEEP Canada itself.

Apple had sent over 5 lakh Apple Watches, iPads and iPhones to GEEP Canada over a course of three years between January 2015 and December 2017. However, during an audit, Apple found that 18% of the devices sent to the recycling firm were still using cellular networks to access the internet. Since this 18% did not include devices not having cellular radio, there is a possibility that even more Apple gadgets had been resold without the tech giant’s knowledge.

Now, the iPhone maker has sought compensation of a minimum of 31 million Canadian dollars (about $22.7 million) from GEEP Canada. On this, the recycling firm has denied any wrongdoing on its part, but has not denied a theft. It had filed a third-party suit stating that three of its employees had stolen the devices on their own. Apple, however, has countered its former partner’s claim and argued that the employees mentioned by GEEP Canada were members of the senior management at the firm.

Considering the increasing amount of e-waste being created every year across the world, Apple has pledged to make its production more environment friendly. As a part of this initiative, it has also attempted to move its recycling process in-house with the help disassembly robots Daisy and Dave. These robots have been specially designed to retrieve components of iPhones that cannot be recovered with the help of traditional recyclers.

However, the tech giant still has a certain degree of reliance on recycling firms for recovery of valuable material from used and discarded gadgets. Hence, Apple had struck a partnership with GEEP Canada which lasted from 2015 to 2018. GEEP Canada’s business included refurbishing and reselling devices, as had been explicitly stated on its website. While it offered several e-waste management services, its mission was encouraging the reuse of devices wherever possible.

On the other hand, if things are viewed from Apple’s point of view, the reselling of these devices would be a problem, even if they were purchased on the grey market. These devices did not meet the security standards of Apple, which sends products for recycling only when they are no longer fit for use by consumers. Apple products, if fitted with counterfeit parts, could cause severe security problems, including battery and electrical defects.

While the lawsuit was filed in January this year, the tech giant has been aware of the theft since between 2017 and 2018, when it had discovered it. Since then, the iPhone maker has not worked with GEEP Canada.

Wed Oct 7 , 2020
Technavio has been monitoring the blast furnaces market and it is poised to grow by USD 869.14 mn during 2020-2024, decelerating at a CAGR of almost 3% during the forecast period. The report offers an up-to-date analysis regarding the current market scenario, latest trends and drivers, and the overall market […] 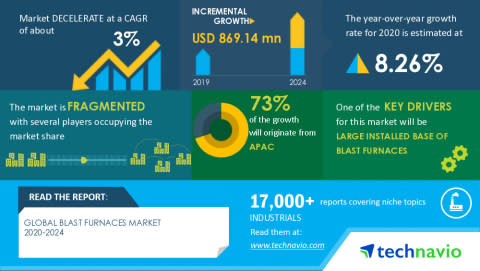