Apple debuted the new Apple Watch Series 6 earlier this month and I’ve been testing out the new (PRODUCT)RED 44mm GPS model. At first glance it doesn’t seem much different than the Apple Watch Series 5, but there’s more than meets the eye. Regular readers know I’m a sucker for […]

Apple debuted the new Apple Watch Series 6 earlier this month and I’ve been testing out the new (PRODUCT)RED 44mm GPS model. At first glance it doesn’t seem much different than the Apple Watch Series 5, but there’s more than meets the eye.

Regular readers know I’m a sucker for buying colorful watches and phones so when I saw the new navy blue and red aluminum watch offerings I knew one of them had to be mine. While blue is one of my favorite colors, I couldn’t find one readily available and since I already purchased a (PRODUCT)RED Apple iPhone SE, I selected the red Apple Watch Series 6. These new colors are attractive and the one visually distinguishing difference between the Series 5 and Series 6.

Also: Apple Watch Series 5 review: This is the watch I’ve been waiting for

The Apple Watch Series 6 looks just like the Apple Watch Series 5 with the same sized curved glass display, curved square watch case, spinning crown button, right side button, same band attachment design, similar heart rate sensor on the back, and same magnetic charging puck. Apple does not include an A/C adapter for the USB cable in the package so you will have to provide your own or purchase one.

Turn on the display of the Apple Watch Series 6 and you may also note the always-on retina display is 2.5 times brighter than the Series 5. At first I thought the full watch face was lit, but it was just the always-on display. The display looks fantastic, just the same as previous Apple Watch models.

The Apple S6 chip replaces the S5 chip and Apple claims it is 20% faster than the S5 and more energy efficient. I’m seeing just about the same battery life as I experienced on the Series 5, but that could be due to the brighter always-on display.

The Apple Watch Series 6 also reportedly charges up faster than the Series 5 so after a night of sleep you can slap the watch on the charger and top it off before heading out to work.

The heart rate sensor has been updated to support blood oxygen tracking with a combination of lights flashing onto your skin.

Also: Best smartwatches in 2020: Apple and Samsung battle for a spot on your wrist

The Apple Watch Series 6 launches with watchOS 7 so all of the new features and functions included in this update are present on the watch. Some of the most significant changes are family setup, new watch faces and complications, watch face sharing capability, sleep tracking, new workouts, and more.

Sleep tracking is something that has been a major focus of Fitbit, Garmin, Samsung, and others so it was nice to see Apple add official support. The sleep application does a solid job of setting up a sleep routine, viewing trends of sleep hours over time, and checking to make sure you have adequate battery life to track a night of sleep. However, there is no sleep score or way to view the various stages of sleep tracked by the Apple Watch so this functionality is not as useful as the results provided by other wearables. After tracking my sleep for a week, I stopped wearing the Apple Watch at night since I found little value in the native sleep tracking.

Health and wellness are important for wearable makers today as the world deals with the global coronavirus pandemic. We have seen pulse oximeters, aka blood oxygen or SpO2 sensors, on wearables for years from companies like Garmin, Fitbit, and Coros. In the beginning, the measure was focused on tracking conditions of athletes in high altitude situations and then evolved to tracking at night while someone is sleeping. Today, Garmin and Apple blood oxygen sensors can measure this information all day long althought it is of limited practical use for such measurements.

In typical Apple fashion, the blood oxygen sensing app is very well done on the Apple Watch. Cool animations and a large number countdown help ensure you stay still while measuring your blood oxygen levels with easy-to-read results. Apple’s press release for the new Apple Watch Series 6 states it is working closely with various medical facilities to continue to study and understand how blood oxygen measurements can help with health management. The key is tracking the trends and understanding that none of these watches are medical devices.

Other health features of watchOS 7 include VO2 Max as a more visible metric (was hidden in Apple Health), handwashing detection, and new workout types. These new workouts include Core Training, Dance, Functional Strength Training, and Cooldown.

There are three apps on the iPhone that are used to customize your Apple Watch and view the data captured by the Apple Watch. The Watch app is where you setup the connection with your new Apple Watch, select and customize watch faces, toggle apps and app settings, and find/install new Apple Watch apps. The Fitness app, previously called Workout, is the app that shows the status of your three rings (move, exercise, stand), details of your specific workouts, trends, and awards. The Fitness app also shows the sharing information from your friends.

The Apple Health app is a vast collection of all of your data, including even your medical records if you set these up with your provider. Sleep, oxygen saturation, ECG, VO2 max, and a vast amount of other data is found within this app. Some of the data is pretty raw with little context to help end users interpret, understand, and use the data for improving their health and wellness. That being said, I personally find the vast amount of data captured by the Apple Watch, and other connected devices, fascinating and just need to figure out other ways to apply the results to my personal health.

Basic sport band, sport loop, and solo loop are included with the default price. The new braided solo loop adds $50 to your purchase price with specific sizing requirements so make sure to figure out which size is right for your wrist.

For those who want a more affordable Apple Watch, this year Apple launched the Apple Watch SE that starts at just $279 for the 40mm GPS model and $309 for the 44mm GPS model. Cellular models add $50 to the price of the GPS model.

Samsung offers the Galaxy Watch 3 at a similar price point with many of the same features as the Apple Watch Series 6. For those interested in Google’s WearOS, the best option for a smartwatch is the new TicWatch Pro 3 from Mobvoi. Stay tuned for a full review of that watch in October.

The blood oxygen sensor has limited practical use, but has the potential to match what others (Fitbit, Garmin) provide with useful apps and better understanding of the data that is captured. It’s also nice to see an official sleep tracking app, but again it isn’t that useful and it’s probably better to charge your Apple Watch at night rather than wear it for sleep tracking.

GPS and heart rate performance during exercise is accurate, but the data shown on the watch during exercises is very basic and cannot compare to a dedicated GPS sports watch. That said, the Apple Watch is a smartwatch first and a health/fitness tracker second. It is designed for the masses and not for athletes looking to track the details of their performance and strategize ways to improve performance.

Third party application support is unrivaled on the Apple Watch so if you use your watch as a smartphone companion and even as a substitute for your smartphone at times then it is tough to beat the latest Apple Watch Series 6.

Thu Oct 1 , 2020
UC San Francisco is piloting the use of California COVID Notify, a smartphone-based tool that allows users to opt-in to receive an alert if they’ve had a high-risk exposure to COVID-19. Starting Sept. 30, students, faculty and staff at UCSF will be invited to activate COVID Notify on their smartphones. […] 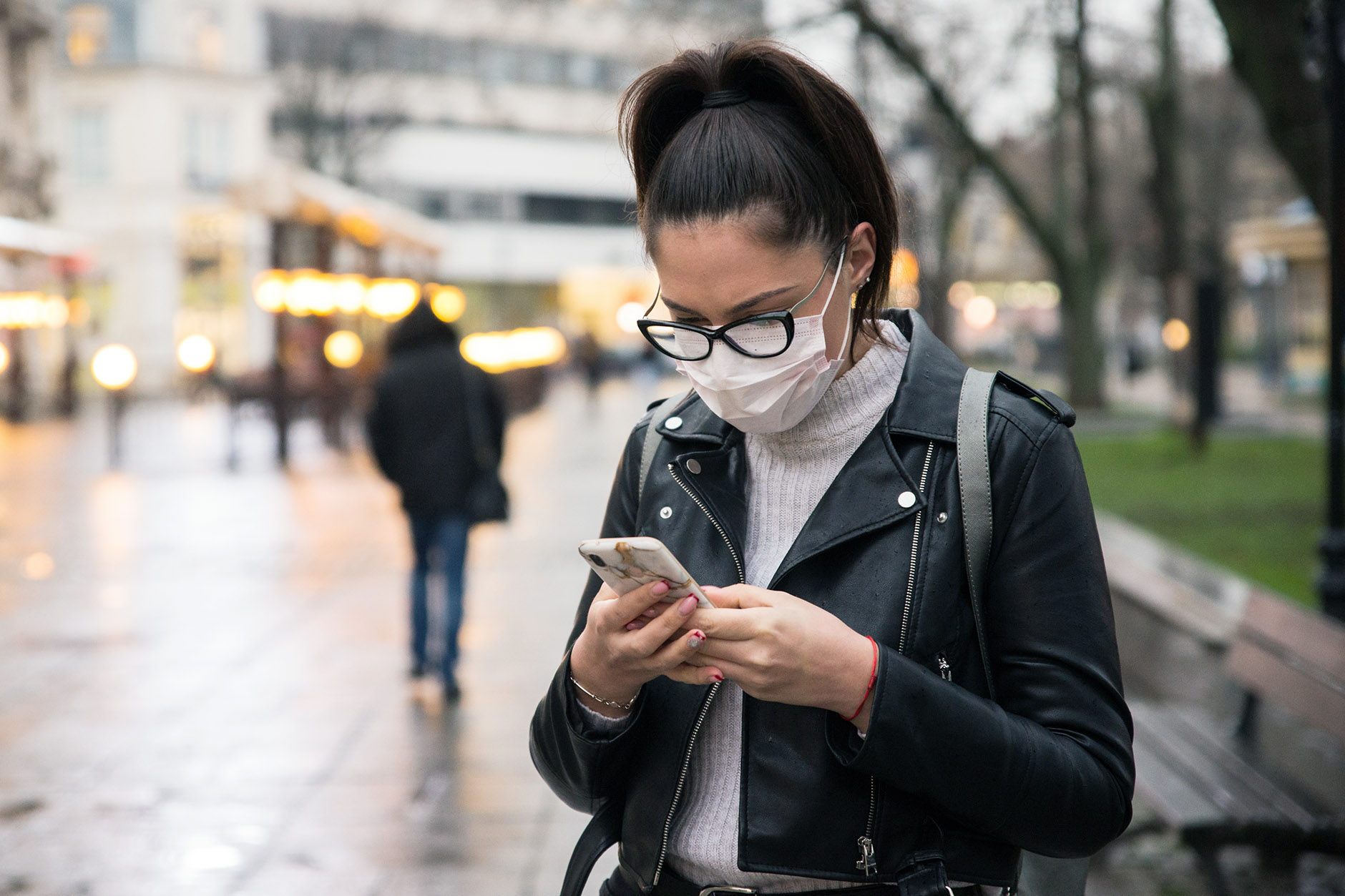