The first image of a black hole, captured in 2019, has revealed more support for Albert Einstein’s theory of general relativity. The new finding has suggested his theory is now 500 times harder to beat. Einstein’s theory, or the idea that gravity is matter warping space-time, has persisted for a […]

The first image of a black hole, captured in 2019, has revealed more support for Albert Einstein’s theory of general relativity. The new finding has suggested his theory is now 500 times harder to beat.

Einstein’s theory, or the idea that gravity is matter warping space-time, has persisted for a hundred years as new astronomical discoveries have been made.

Researchers from the Event Horizon Telescope collaboration, the team that imaged the central black hole of the M87 galaxy last year, analyzed the black hole’s “shadow.”

Black holes don’t cast shadows in the typical sense because they aren’t solid objects that prevent light from passing through them, CNN reported.

Instead, black holes interact with light a little differently but create a similar effect. A black hole can pull light toward itself, and while light can’t escape the inside of a black hole, it’s possible for light to make a getaway in a region around the event horizon, or point of no return. This in-between space can look like a shadow.

Because black holes have such immense gravity, which curves space-time, it can actually act like magnifier that makes the black hole’s shadow appear larger than it is.

The research team measured this distortion and found that the size of this black hole’s shadow aligns with the theory of relativity — or matter warping space-time to create gravity.

The study published Thursday in the journal Physical Review Letters.

“This is really just the beginning. We have now shown that it is possible to use an image of a black hole to test the theory of gravity,” said Lia Medeiros, study coauthor and postdoctoral fellow at the Institute for Advanced Study in New Jersey, in a statement. “This test will be even more powerful once we image the black hole in the center of our own galaxy and in future EHT observations with additional telescopes that are being added to the array.” 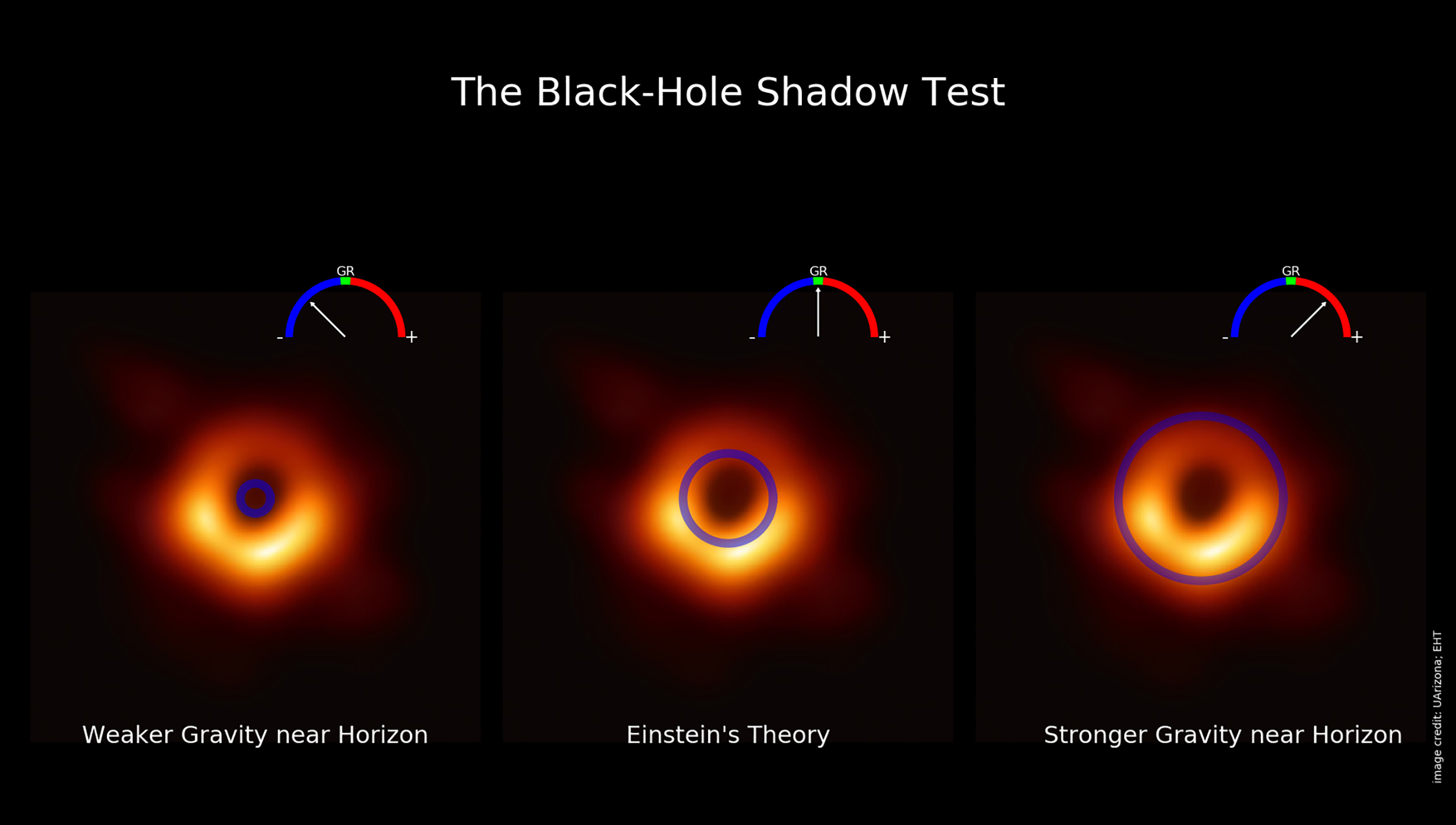 It’s an extreme test of gravity, here at the edge of a supermassive black hole, when compared with previous gravity tests like the detection of gravitational waves or ripples in space-time or even the displacement of starlight witnessed during the 1919 solar eclipse.

The black hole in this study is 6.5 billion times more massive than our sun, whereas the gravitational wave detectors on Earth monitor black holes that are five to several dozen times the mass of the sun.

This range helps further the understanding of the properties of black holes, both the visible aspects and their invisible structures.

“Using the gauge we developed, we showed that the measured size of the black hole shadow in M87 tightens the wiggle room for modifications to Einstein’s theory of general relativity by almost a factor of 500, compared to previous tests in the solar system,” said Feryal zel, study coauthor and University of Arizona astrophysics professor, in a statement.

“Many ways to modify general relativity fail at this new and tighter black hole shadow test.”

Now that researchers know they can use images of black holes to test the theory of gravity, it opens up more possibilities for the future.

“Together with gravitational-wave observations, this marks the beginning of a new era in black hole astrophysics,” said Dimitrios Psaltis, lead study author and University of Arizona astrophysics professor, in a statement.

While the theory of relativity has passed all of the tests thrown at it so far, further study is needed to confirm whether it continues to match up with astrophysical objects.

“For the first time we have a different gauge by which we can do a test that’s 500 times better, and that gauge is the shadow size of a black hole,” zel said. “When we obtain an image of the black hole at the center of our own galaxy, then we can constrain deviations from general relativity even further.”

The video featured is from a previous report.

Sun Oct 4 , 2020
IMAGE: UIC College of Engineering MIE professors Ken Brezinsky (L) and Patrick Lynch. view more  Credit: UIC/Jim Young The University of Illinois Chicago has received an $8 million award from the Army Research Laboratory, or ARL, to support the development of specialized sensors to enable drones to use different types of […]