The new Knife-tool now allows freehand cuts drawing and closing of cut-loops via double click With more than 200 bug fixes and some fairly hefty new features among a plethora of tweaks, Blender 2.73 is somewhat more than just a point release. Guest Author, Gottfried Hofmann, provides the details. Drawing Storyboards […] 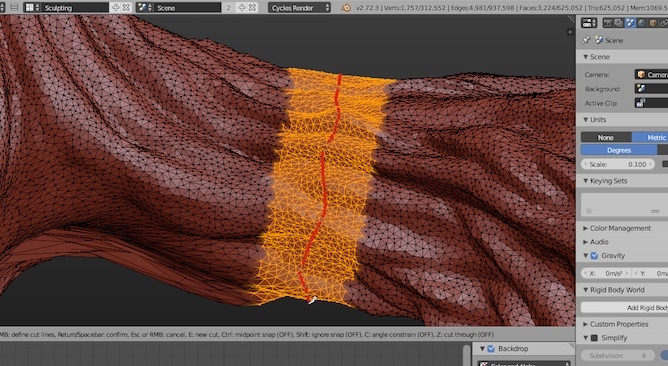 With more than 200 bug fixes and some fairly hefty new features among a plethora of tweaks, Blender 2.73 is somewhat more than just a point release. Guest Author, Gottfried Hofmann, provides the details.

Drawing Storyboards and converting them to animatics right insight Blender has become a lot more feasible with the latest additions to the grease pencil tool in Blender 2.73. Strokes created with the grease pencil can now be edited later on in a fashion very similar to the mesh editing system in Blender. Each stroke and each point of a stroke can be selected, moved, scaled, rotated, duplicated, mirrored and so on. Those changes can also be animated with the only limitation of drivers not working yet.

The onion skinning feature of the grease pencil now allows to set different colours for different ghosting images and the number of ghosts before and after the current frame can be set individually.

Grease pencil objects can also be filled with a color. The operation is limited to convex objects at the moment, for concave ones the convex hull will be used. A Pac-Man like figure would become a blob without a mouth for example. Grease pencil lines can now get a volume, making strokes equally thick no matter from with direction they are viewed.

The user interface for the grease pencil also got an overhaul, being more compact and nicer to look at. In addition, dedicated pie menus have been added for the grease pencil. Those are not the default but it is advised to use them as they are designed to help make certain common tasks easier.

The render engine Cycles now supports Geforece 9xx (Maxwell) cards for GPU rendering and get lots of performance improvements. Area lamps, for example, render with a lot less noise now and homogenous volumes should render up to 10% faster. Meshes with a volume shader can now also be rendered when the camera is inside of it, while transitions from inside to outside are supported as well. The new option “Max Bounces” for lamps can control the number of reflections and refractions for which a lamp is still visible. When the world background uses an image texture in Cycles, it can now be previewed directly in the 3D viewport.

The line drawing engine Freestyle now supports the export of the lines into the SVG format. This is available as an add-on and can export both still images and animations. The latter will output a series of .svg files, one for each frame. The exporter has some additional options for better compatibility of the resulting SVG with Inkscape.

Motion tracking gets a new screen layout with more editors visible and uses a new algorithm for tracking features. This is transparent to the user but should result in faster tracking.

The video sequence editor now has a backdrop just like the compositor. That is a preview image right in the work area. Strips now can be snapped to the start or end of other strips by holding down CTRL and the slip tools allow the user to move the content of a strip without moving the strip itself. Audio strips now can preview the waveform by default, an option that had to be set for each strip individually before.

Each editor can fill the entire screen area of Blender without any menus using ALT+F10. Moving the mouse cursor to the top right will make an icon show up which allows the user to return back to the normal view.