OPINION: When it comes to fixing things, I am one of the most useless people I know. Luckily, my wife either takes care of household maintenance herself – one of her first Christmas present requests was for a power drill – or else ‘’calls a man’’. My university education was […]

OPINION: When it comes to fixing things, I am one of the most useless people I know. Luckily, my wife either takes care of household maintenance herself – one of her first Christmas present requests was for a power drill – or else ‘’calls a man’’.

My university education was enjoyable, but, sadly, you don’t learn home maintenance by studying three-dimensional geometry or the plays of Bertolt Brecht.

So, when my bike bag that cunningly clips on to my carrier fell apart, so did I. I’d have to replace it or take it to a bag repairer – a dying breed in Wellington. However, on closer inspection I noticed that the only problem was that a single screw and washer were missing. Surely even someone as useless as me could fix that.

I removed an identical screw and washer from the bag and decided to visit the local hardware store.

The last time I did that Jim Bolger was prime minister. When I grew up in Brooklyn, I vaguely remember there being a hardware store, which I think is now a trendy café. There were two or three hardware stores in Newtown, but they have also vanished. I would have to go to one of those giant hardware barns.

After perusing the entire screw section, I could find nothing resembling what I had in my hand. They were all conical not cylindrical (see – studying geometry does have its uses). I was about to leave in disgust when I realised that I was not holding a screw but a bolt.

In the bolt section I found bolts longer, thicker and shorter than mine but not identical. Some bolts were labelled M3 (a bit too small) and others M5 (a bit too big). I had a Goldilocks moment and brilliantly deduced that I must be looking for an M4. Alas, the M4 shelf was empty. A budding bike-bag fixer had beaten me to it.

I looked around for help. There was a bloke in shorts called Trev holding a long piece of x by y (don’t ask me) timber. Perfect. Alas, he was a customer.

The young counter attendant looked nothing like the blokey blokes who staffed hardware stores when I was a kid, though I suspect we could have had quite a conversation about German expressionism.

I explained my problem and he just held up his hands. ‘Sorry mate, I know absolutely nothing about nuts and bolts, or any other hardware.’’

‘‘But’’, I stammered, ‘’this is a hardware store. Is there someone who can help?’’ He called out to a slightly older colleague. ‘‘Mate, do you know anything about hardware?’’

Now I know columnists are sometimes prone to exaggeration for comic effect, but I swear on my urtext edition of Die Mutter that this is exactly what he said.

His colleague knew ‘’a little bit’’ and did his best. Knowledgeable Guy returned triumphant with some M4s exactly the right length. I was most grateful, although I noticed an imperfection. ‘‘Mate, the heads are hexes, not Phillips.’’ At that moment, I felt that if I had a pair of shorts and Blundstone boots I could pass for a tradie.

Further searching revealed that there were no M4s with Phillips heads in stock so hexes would have to do. ’‘What about washers?’’

‘’They’re in the bag with the bolts,’’ replied Knowledgeable Guy nonchalantly. ‘’No, they are NOT,’’ I exclaimed, with more certainty than Azdak delivering the verdict in the Caucasian Chalk Circle, ‘’they are nuts!’’ So Knowledgeable Guy went and found some M4 washers.

Meanwhile the other checkout assistants gaped in amazement at this weird foreign language we were speaking.

I’m delighted to report that my bag is securely fixed to the carrier and I was able to successfully cycle to a local café and back to buy some Fair Trade Ethiopian coffee beans.

But my hardware experience did leave me wondering why so many large shops have staff who know little about what they’re selling. The race to the bottom in wages and conditions in places like service stations has seen services eliminated and more untrained staff hired.

And it’s not just stores and garages. Retail bankers used to know the unique details of clients’ finances. Now, with 300 or 400 clients apiece, you feel they simply put financial requests into a computer algorithm and make decisions based on that. By the time you request a face-to-face meeting, they’ve moved on and you have a new retail banker.

Perhaps that’s why TV ads for banks, hardware stores and service stations are all about knowledgeable staff and personal service – they know that’s not what you usually get.

If there are any budding entrepreneurs thinking of a starting a business, a small hardware store with staff who could spot the correct sprocket size at 50 metres could be a winner.

Then again, think of the anti-competitive behaviour they’d face from multinational barn owners who think because they are so big that only they truly understand the nuts and bolts of the hardware trade.

Sun Oct 4 , 2020
Technavio has been monitoring the over the top market and it is poised to grow by USD 88.85 bn during 2020-2024, progressing at a CAGR of almost 14% during the forecast period. The report offers an up-to-date analysis regarding the current market scenario, latest trends and drivers, and the overall […] 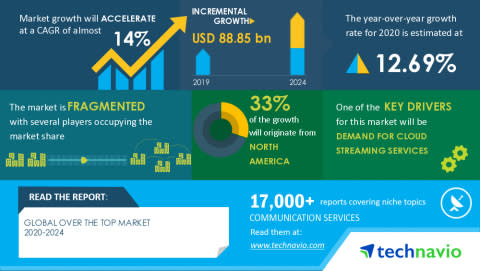