You know that 4K has become mainstream when all price tiers are covered. And in this latest announcement from Canon, we can truly say that the market now has a 4K camera available for everyone. The new XF400 and XF405 models would seem to represent a very real option for […] 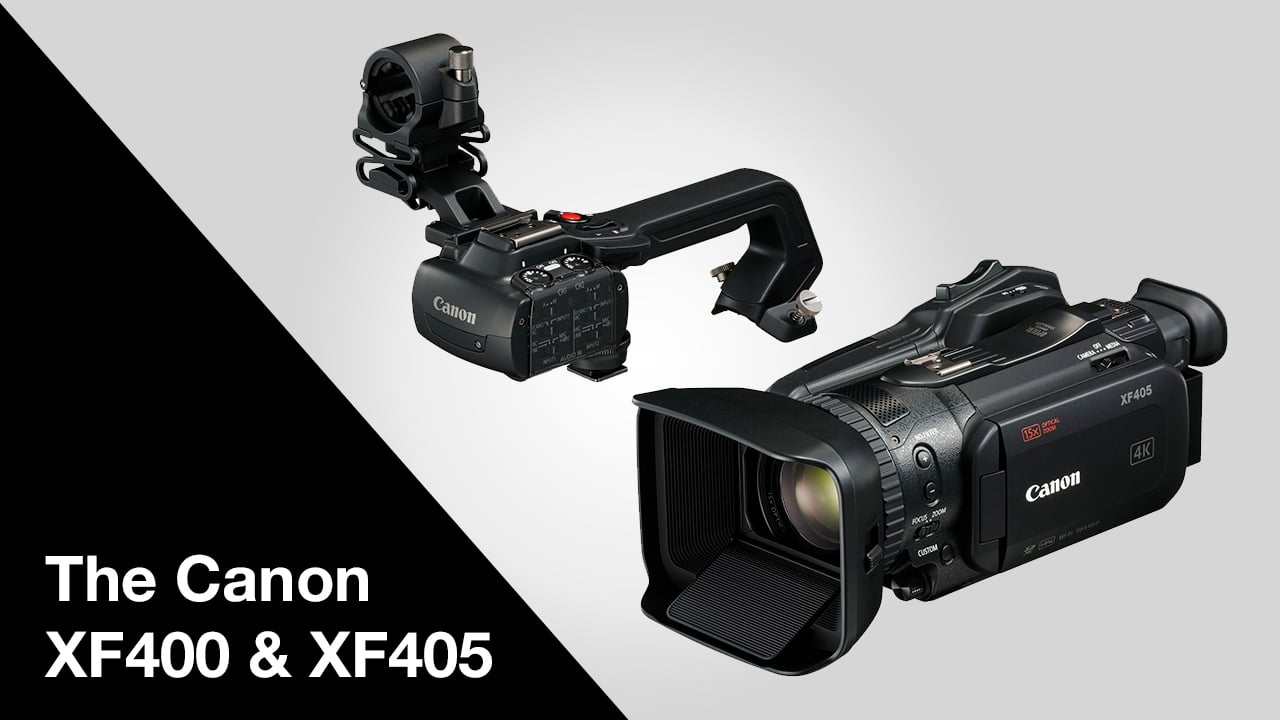 You know that 4K has become mainstream when all price tiers are covered. And in this latest announcement from Canon, we can truly say that the market now has a 4K camera available for everyone.

The new XF400 and XF405 models would seem to represent a very real option for those who require a camera at the entry tier of the professional market. Particularly citizen journalism, low budget corporate and industrial, and wedding videographers. However these new cameras would appear to have more going for them beyond simply the 4K monicker.

For a start they record to 4:2:2 colour in all recording resolutions except 50p and 60p 4K modes, which revert to 4:2:0. This is to say that recording in 25p and 30p gives you full 4:2:2 accuracy. 4K modes take a reduction in colour precision to 8-bit, while 1080p modes record in full 10-bit colour. Bitrates of up to 150Mbps will be supported in 4K modes using the XF-AVC codec, which will apparently be implemented at a later date with a firmware update.

Both cameras are capable of recording continuous 100fps footage in 1080p, with higher frame rates possible at the expense of resolution. Slow motion is now regarded as a must-have feature on any new camera. With these new models being touted as 4K 50/60p camcorders it is only logical that they should be capable of 100fps at a minimum to ensure that half speed slow motion is available at those frame rates. This does of course mean that in 25p and 30p 4K modes the cameras will still be able to record half speed slow motion at full 4K resolution. Not too shabby at all. 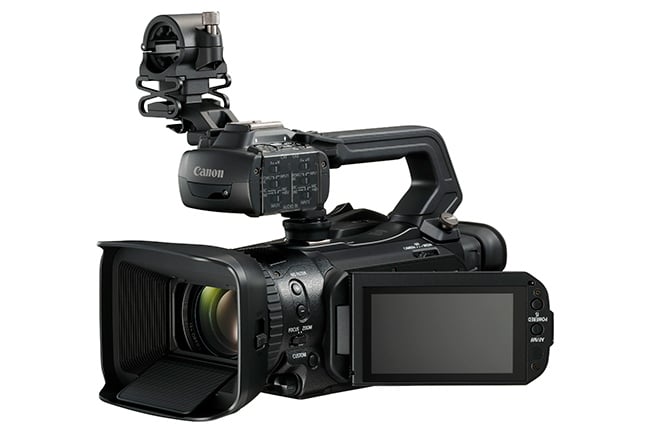 The Canon XF400 and XF405 4K camcorders – power without the price

Sensor wise the 405 and 400 house a very usefully sized 1.0inch CMOS. Not everybody needs uber short depth of field, and for the type of work these cameras will be employed to do a 1.0inch sensor allows a lot of versatility for differing situations. While it will never equal a true big chip camera, users will be able to achieve some degree of the shallow depth of field look when required, for instance while shooting interviews, but not have to suffer the same critical focus issues they might have in low light situations with a truly large chip camera. After all, a camera such as this will be used in a wide variety of run and gun situations, and sometimes ultra shallow depth of field can be a hinderance, not a help.

Other features include built in optical ND filters, XLR audio connectivity, and on the XF405 a 3G-SDI terminal. 5-axis stabilisation also features, using a now familiar combination of optical and electronic movement compensation.

Canon has also sought to include a wide dynamic range mode, which obtains a claimed 12-stop contrast range. We would hazard to guess that this is a type of log transfer function, designed for grading, rather than HLG or equivalent, which would offer ready to watch HDR footage.

The cameras do not feature a timelapse function, a perhaps odd omission given that the cameras have a stills capability, and it is a function that everyone from wedding shooters to corporate video people would use. However they do have a three second pre-record cache. Something that is a nod to where these cameras are aimed, where action could easily be missed. 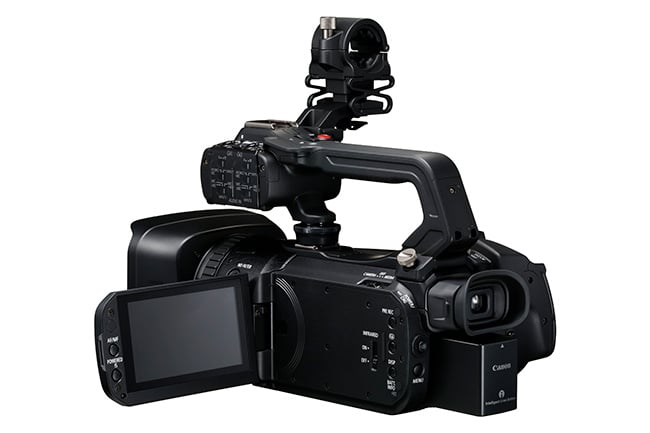 We are used to seeing lots of announcements of new big chip cameras, and it is tempting to overlook workhorse models such as these. While the XF405 and XF400 are not truly earth shattering, they are in fact important cameras offering some incredibly useful features that are sure to satisfy the types of user that they are aimed at. The high frame rate ability alone is the sort of functionality that is not normally seen on cameras such as this. Particularly not at such usable bitrates and resolutions.

Canon has always been very good at producing this type of camera. From the original XM1, it has always been an important market for the company, and that success looks to continue with the new models.

Alongside the XF400 series, Canon also announced the XA11 and XA15, 1080p cameras that are aimed at those who are not quite ready to make the leap to 4K, but who still require something that can carry out bread and butter work where a lightweight, discreet camera is required.

United Kingdom, Republic of Ireland, 12 September, 12 September, 2017 – Canon today announces the expansion of its professional camcorder range with the launch of four new camcorders – the 4K 50P capable XF405 and XF400 and the Full HD XA15 and XA11. Delivering first class optics, powerful sensors and a range of versatile features, these compact and lightweight camcorders are perfect for a broad range of professional video productions.

The XF405 and XF400 are equipped with a newly developed 15x optical zoom lens (35 mm film equivalent: 25.5 mm–382.5 mm), a 1.0-Type CMOS sensor and a Dual DIGIC DV 6 image-processing platform to achieve high-quality 4K/50p images across the entire zoom range. They also offer continuous 100fps recording in Full HD in order to deliver slow motion footage. These advanced features are all integrated in a compact and lightweight body. Thanks to built-in Neutral Density (ND) filters, the XF405 and XF400 can capture stunning images with a shallow depth of field – even in adverse lighting conditions. Relay and simultaneous recording are provided via Dual SD card slots, which helps to expand recording times and to create an immediate backup. A range of interface options are featured in the XF405 and XF400, including HDMI, an XLR Professional audio terminal, LAN and Remote. The XF405 also features a 3G-SDI terminal. Built-in WiFi capability enables FTP file transfer and allows the camcorders to be controlled with a mobile device via Browser Remote.

Dual Pixel CMOS AF is featured in both the XF405 and XF400 for fast and accurate autofocusing in approximately 80% of the image. A touch screen allows further focus control and intuitive camera operation. Various AF options are offered including Face Priority AF and Face Only AF, alongside the innovative Dual Pixel Focus Guide. This feature supports manual focus shooting by visually indicating the focus position.

The XA15 and XA11 are Full HD camcorders which feature stunning 20x 26.8mm-576mm optical zoom lenses to flexibly capture a variety of scenes with superb image quality. A Hi-UD lens supports the reduction of chromatic aberration and drives vivid imaging. Canon’s HD CMOS Sensor and the powerful DIGIC DV4 image processing platform deliver great performance in low light and the ability to capture superb Full HD images in 50P at 35Mbps. Wide DR mode supports the smooth compression of high luminance areas to achieve 600% DR. This makes it possible to shoot with smooth color gradation and suppressed overexposure. This is applicable to any shooting environment where the difference between light and dark areas is prone to causing overexposure. Flexible image expression is supported by a Slow/Fast Segment function that enables users to select shooting speeds from 0.4x to a maximum of 1,200x.

*XF-AVC will be supported in a future firmware update in the first half of 2018.

Sun Sep 27 , 2020
By Daewoung Kim SEOUL, Sept 10 (Reuters) – A South Korean company has invented a battery-powered filtered face mask designed to reduce annoying problems associated with conventional designs, such as breathing difficulties and fogged-up glasses. LG Electronics’ PuriCare Wearable, which comes in one size and weighs as much as a […]