Sa Ye (right) speaks at the Peace Elite League season 2 finals on Aug 22 in Xi’an, Shaanxi province. [Photo provided to China Daily] Earlier this year, the story of a disabled teenager from a rural village in Xuanwei of southwestern China’s Yunnan province becoming a video game streamer on the […]

Earlier this year, the story of a disabled teenager from a rural village in Xuanwei of southwestern China’s Yunnan province becoming a video game streamer on the Huya platform was one of the most talked-about by netizens in the country.

Sa Ye, known as “Qizai”, who suffers from congenital muscular atrophy, could hardly afford the huge medical expenses for his treatment. He had almost lost his ability to walk and could only move his fingers properly. A smartphone gifted by his parents was his only window to the outside world, while the numerous games on the instrument eased his boredom and made him an esports buff.

“When I can still move my fingers, I just want to work hard on my gaming skills and make money to cover the living expenses for my parents,” said Sa.

With the help of Huya DK gaming guide, Sa’s dream finally came true, as he officially became a video game streamer on the Huya livestreaming platform. He has already moved up from the beginner level to the professional level and won several key contests for Game for Peace, Tencent’s popular mobile shooting game.

Likewise, the money he earns has also risen steadily. At the beginning of his streaming career, his monthly income was around 1,600 yuan ($236). Now he usually earns more than 10,000 yuan a month, and the same is expected to grow steadily in the future.

Sa is just one of the tech-savvy younger generation who has found new job options from the booming gaming industry, particularly in the esports sector.

This year, while many industries have been hit badly by the COVID-19 pandemic, the gaming industry has emerged as one of the unlikely beneficiaries of the outbreak.

During the first six months of this year, Chinese gaming companies reported better-than-expected growth, with total sales rising by 22.34 percent on a yearly basis to 139.49 billion yuan, according to the China Game Industry Report released in July.

According to the report, the country had nearly 660 million gamers, of which 480 million are esports players. During the first six months of this year, revenue generated from the esports industry jumped by more than 50 percent to 71.94 billion yuan.

Gao Dongxu, founder and chief analyst of Entbrains, a Beijing-based digital entertainment consulting firm, said livestreaming gaming events are now a key growth area for the sector apart from encouraging the promotion of new gaming content and development of the esports industry. “Sensing the huge growth potential, gaming companies will continue to increase their investment in the livestreaming business,” said Gao. “As a growing number of cities and provinces are gearing up to develop esports industries, gaming and esports livestreaming sector will see more supportive policies in the future.” Gao said the esports and gaming copyrights and talented streamers are crucial for companies looking to make advances in the sector.

Experts said while the gaming sector grew strongly in the first quarter, it may not see such robust growth subsequently due to tight regulations and a mature domestic gaming market.

Against this backdrop, two major gaming livestreaming platforms Huya and Douyu announced a merger deal that was brokered by its main investor Tencent in August. The deal will help the companies to reduce an overlap of users, cut costs, improve efficiency and generate more profits in the future, said Sun Hui, chairman and CEO of Beijing Fuzhi 99 Software Technology Co Ltd.

“The merger will also help them to diversify the offerings and even generate new revenue streams from sectors such as short video feeds,” said Sun. “Newcomers such as video-sharing platform Bilibili and short video app Kuaishou are expanding their livestreaming business and market competition is rising. Livestreaming platforms should develop new businesses or seek global expansion to foster sustainable development.”

Thu Oct 1 , 2020
The global social commerce market size is poised to grow by USD 2.05 trillion during 2020-2024, progressing at a CAGR of almost 31% throughout the forecast period, according to the latest report by Technavio. The report offers an up-to-date analysis regarding the current market scenario, latest trends and drivers, and […] 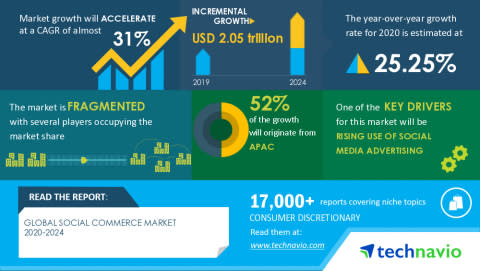