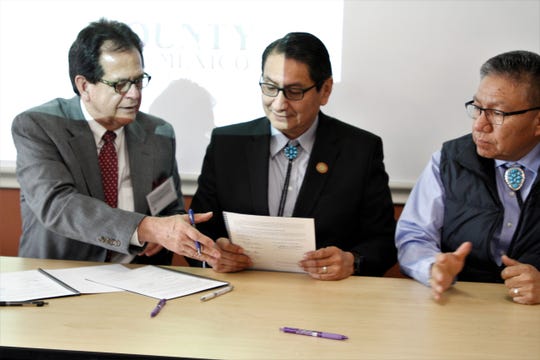 AZTEC — San Juan County will use $2 million of federal funding to study the feasibility of building a railroad spur connecting Farmington with Gallup.

Local officials say this could create economic development potential. The county has been hoping to build a rail spur for decades and signed a memorandum of understanding with Navajo Nation earlier this year to work together on the railroad.

The county was awarded funding through the Better Utilizing Investments to Leverage Development or BUILD Transportation Discretionary Grant program, which is administered by the US Department of Transportation. There were more than 700 applicants for that funding, according to a press release from the county.

“This Administration is making significant investments in infrastructure, and this $1 billion in BUILD grants will repair, rebuild, and revitalize transportation systems across America,” said U.S. Secretary of Transportation Elaine L. Chao in a press release.

The BUILD grant program provides funding for roads, bridges, transit, rail, ports and intermodal transportation. Since 2017, the U.S. Department of Transportation has awarded nearly $4 billion in funding for projects nationwide.

“I commend San Juan County for securing grant dollars to conduct feasibility studies for this initiative,” said Navajo Nation President Jonathan Nez in a press release. “Informing local residents and Navajo chapters and gaining their support is essential to move this proposed project forward. We look forward to working with San Juan County and others to determine the feasibility of this project.”

While the county has been hoping to build a railroad and has previously used state funds to explore the possibility, this grant funding marks the furthest step the county has taken over the past decades in the effort to return rail service to the community, according to a press release.

The money will be used to first fund an economic feasibility study and then a design and construction study, which will examine right of way, alignment and access.

“Rail has long been a crucial missing piece of our logistics resources,” said Warren Unsicker, director of economic development for the City of Farmington. “This stands to not only create countless new jobs but attract new businesses that would not have otherwise considered our area.”

The county, he said, has no plans of owning either the railroad or the petrochemical manufacturing plant. Instead, it hopes to partner with private industry and the industry would provide the funding and own the rail line.

“Award of this grant proves just how important a possible rail system is to our area,” said San Juan County Commission Chairman Jack Fortner in the press release. “The economic development represented by a freight system means numerous jobs for San Juan County and Navajo Nation residents as well as a secure future of economic diversity.”

Hannah Grover covers government for The Daily Times. She can be reached at 505-564-4652 or via email at [email protected]

Mon Oct 5 , 2020
As the largest private system in the U.S., one tightly integrated on both the insurance and care delivery sides, Kaiser Permanente has long been a model for healthcare reform and outcomes improvement. Now, Kaiser wants to improve integration between genomics research and clinical care. In May, Kaiser, working with technology […]