Manufacturers continue to develop advanced technologies that aid in the improved operational efficiency of heavy-duty commercial vehicles. This effort has been a priority for vehicle suppliers and manufacturers as the industry looks to meet the next round of federal emissions regulations. Southwest Research Institute (SwRI) engineers shared results of a […]

Manufacturers continue to develop advanced technologies that aid in the improved operational efficiency of heavy-duty commercial vehicles. This effort has been a priority for vehicle suppliers and manufacturers as the industry looks to meet the next round of federal emissions regulations.

A particular challenge with the development of new technologies has been the trade-off between significant reductions in one emissions category, only to increase emissions for others. 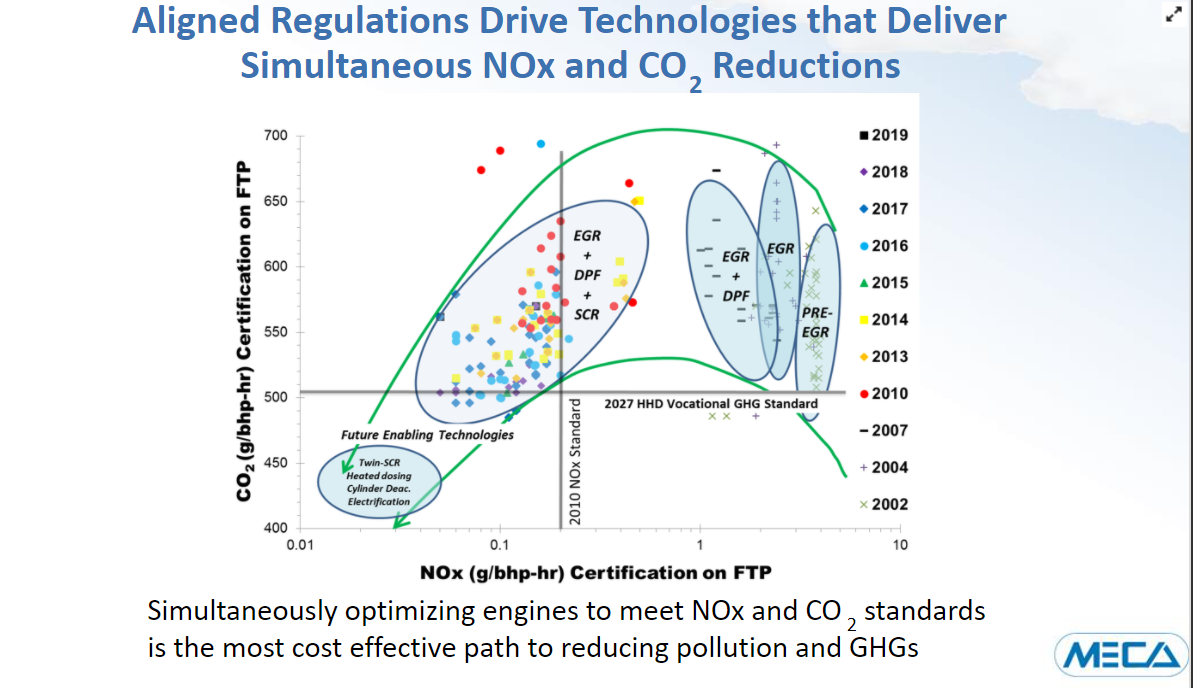 “I like it because it shows how aligned regulations incentivize the most cost-effective technology solutions,” Dr. Rasto Brezny of MECA explained, regarding this chart. Testing conducted by MECA, and displayed here, indicates when all aftertreatment technologies – EGR, DPF and SCR – on today’s heavy duty vehicles are applied, it provides the greatest reduction in both NOx and CO2 emissions.

“Traditionally, it’s been argued that reducing emissions of NOx, PM and CO2 can’t be accomplished at the same time, and there’s this trade-off that exists that prevents achieving one reduction without increasing the other,” Brezny said. “Historically, this has been the case when we’re only considering engine combustion mechanisms for pollutant control.”

The challenge today is that incremental reductions in all three areas must be achieved – to the tune of an additional 90% reduction from 0.2 ppm to 0.02 ppm in NOx and a 25% reduction in CO2 from Phase 1 requirements – in order to meet the next round of emissions mandates detailed in the EPA NHTSA Phase 2 GHG emissions joint ruling, which will require incremental reductions in emissions of heavy-duty trucks next year through 2027.

Chris Sharp, institute engineer for SwRI, reviewed and shared insights on the organization’s findings for the most recent iteration of research conducted by SwRI for the California Air Resources Board (CARB), as part of CARB’s Ultra-Low NOx (ULN) program. This is the third evaluation conducted on behalf of CARB to identify technologies that can help reach GHG Phase 2 emissions requirements, and the first to leverage updated engine architecture – including cylinder deactivation (CDA) technology  – with an advanced aftertreatment system.

The tests were conducted on a 2017 production Cummins engine with CDA technology, coupled with an advanced aftertreatment system that included a dual SCR system and dual dosing functionality, allowing the system to administer two rounds of diesel exhaust fluid during the aftertreatment process. 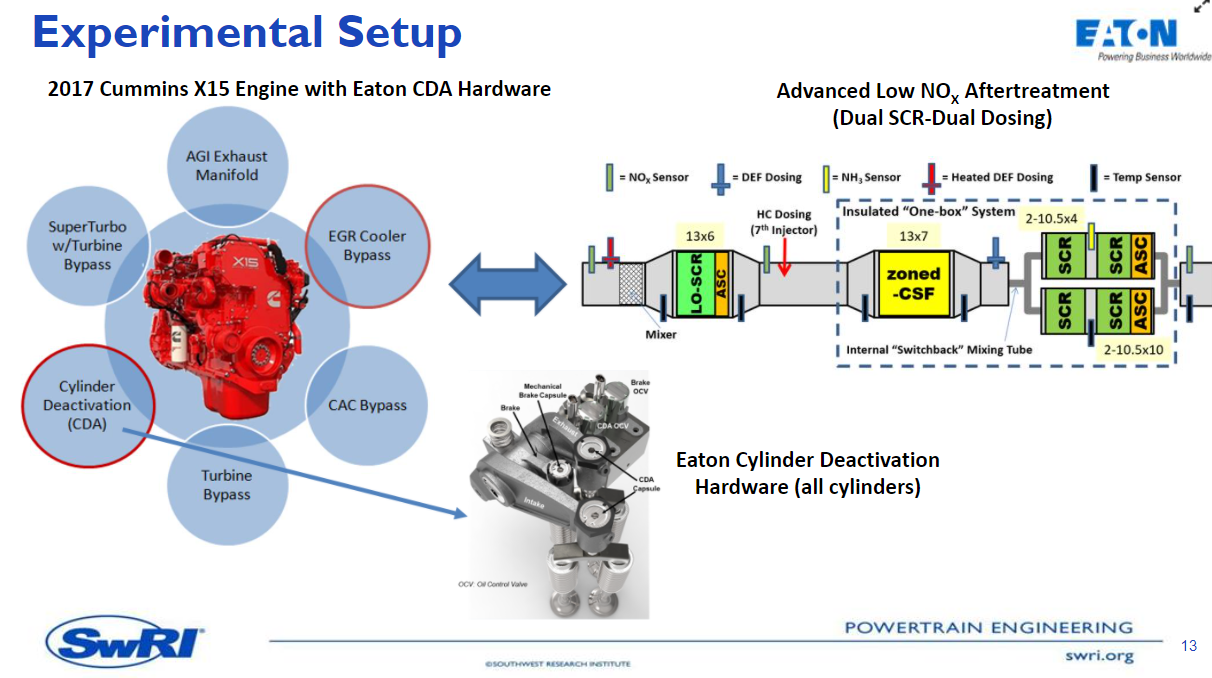 “After screening an extensive set of hardware, we settled in on CDA as our most powerful lever for hitting both the NOx and CO2 targets,” said Sharp.

CDA technology allows a commercial vehicle’s engine to engage or disengage one or many of the various engine’s cylinders in order to allow the engine to operate at a higher temperature without using as much fuel.

One major consideration with CDA technology will be the potential noise vibration and harshness (NVH) created by disengaging and re-engaging cylinders.

“When you start deactivating cylinders, there’s a number of different modes in which we could do that with the engine, you can change the vibration characteristics of the engine, and we have to make sure that remains compatible with being able to mount and install this (technology) in a truck,” Sharp said.

Changing the firing frequency of the engine can alter vibration characteristics, noted Sharp. To ensure minimized vibration of the engine and engine mounts, the SwRI researchers created a spreadsheet highlighting the most optimal cylinder deactivation pattern for disengaging or engaging cylinders based on the vehicle’s current drive cycle or duty cycle.

“The idea of combining all this together is to come up with a suggested firing recipe from an NVH standpoint that avoids these resonances – both torsional and from a linear vibration standpoint – so that we can be successful in applying the CDA without starting to break things and cause unacceptable levels of vibration,” said Sharp.

The assessment evaluated a variety of speed and load ranges, comparing base engine output to an engine equipped with CDA technology.

These tests included, but were not limited to:

Sharp shared a real-world situation where the CDA system would seamlessly switch between firing modes in order to maintain ideal temperature in the engine and aftertreatment system while reducing emissions: “When we first move into the higher speed idle, the strategy initially flips into a two-cylinder firing mode to help the aftertreatment warm up to maintain performance. And then once the targets had been reached for temperature, it moves back into a three-cylinder firing mode that has a little bit more fuel consumption benefit.”

The study also replicated the performance of the CDA technology and the updated aftertreatment system to verify longevity of the efficiency gains. Sharp confirmed there were performance losses over time – putting on more than 400,000 miles on the system in a laboratory setting – but the system still emitted fewer emissions than vehicles on roads today.

One area Sharp believes CDA may be able to provide additional benefit is through desulfation.

Excess sulfur collected in the SCR catalyst can cause significant damage to the system.

With a traditional heavy truck aftertreatment system – where an SCR catalyst is also housed – the excess sulfur is removed when a system regeneration (regen) is completed, since temperatures reach more than 500 degrees C during that process.

In the dual SCR system, the light-off SCR is upstream from this traditional aftertreatment system. This means that the second SCR system would not be part of the regen process. But with CDA, the higher temperatures afforded by the CDA technology can aid in the desulfation process for this second SCR system.

“With CDA, we can actually reach temperatures in the neighborhood of 500 degrees C, before we start applying any other calibration modifications,” Sharp said. He added slight modifications would be required to raise the engine temperature slightly to complete this desulfation process, but overall CDA would allow the system to complete desulfation under regular operation, even under a light load.

“That will cost us some fuel,” Sharp said. “But it would cost us fuel to reach 550 (degrees) C under normal operation. In fact, it costs us a lot more fuel. So CDA can still help us reduce CO2 because it’ll help us reduce the fuel penalty associated with the required desulfation that we have to do.”

Expectations for the future

“This next decade in emission control technology is going to be a really exciting time, because we’re going to see new emission standards that are going to continue to drive technology and innovation in the supplier industry,” Brezny said.

As it relates to cost for adoption, Brezny noted new technologies initially have a higher cost.

“If we look at 2010 technology today and what it cost 10 years ago, those costs have come down by over 30%, and technology has actually gotten better over that timeframe,” Brezny said.

Ultimately, CDA not only helps to reduce the NOx emissions, it also reduces CO2 by lowering fuel consumption. CDA technology would drive lower total cost of ownership because of the fuel savings afforded by making the engine more efficient.

“The key to really realizing that benefit is integrating CDA into a larger engine calibration strategy, and that’s what we’ve done with the stage-three engine. CDA is part of a much larger set of modifications,” said Sharp.

Sat Oct 10 , 2020
The global childcare management software market size is poised to grow by USD 62.21 million during 2020-2024, progressing at a CAGR of about 6% throughout the forecast period, according to the latest report by Technavio. The report offers an up-to-date analysis regarding the current market scenario, latest trends and drivers, […] 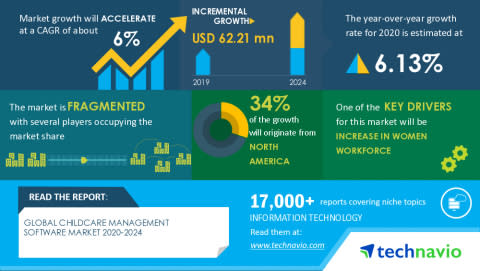