Lincoln Police Investigator Bob Hurley, who testified last week, talked the jury through Bailey Boswell and Aubrey Trail’s movements on the morning of November 15, 2017; just hours before evidence points to Loofe being killed and her body later being disposed of in Clay County in the early morning hours of November 16. Hurley tracked the cell phones of Boswell and Trail, which made connections with cell phone towers, helping pin point them on the map.

On the night of the 14, Trail and Boswell are seen on video as they stayed the night at the Best Western motel on south 27th street in Lincoln. The next morning, they go to a variety of stores, leaving a paper trail of receipts. 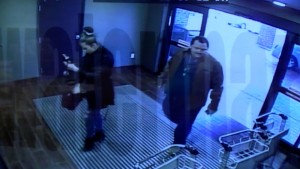 The couple first goes to The Home Depot on south 27th street, where receipts show them purchasing a hacksaw and blades, plastic sheets, a drywall blade and box cutting knife. On the witness stand to testify to the receipt and surveillance video was Matt Workman, who is in charge of safety and security for The Home Depot in Nebraska, Iowa and South Dakota. 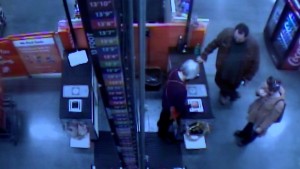 The couple was then captured on video at the Aardvark Antique Mall. On the stand was Lorrie Orman, the general manager of the mall, who says Boswell and Trail rented space and sold their own antique items at the mall since June of 2017. That morning, they picked up their check and shopped around, picking up a short list of unusual items that included two meat grinders, a hand weed cutter, a Gerber folding saw among other various items. 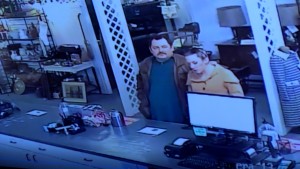 Orman testified that Boswell would come to the mall close to once a week, and she was usually either alone or with another young woman, Anastasia Golyakova, who will testify in the trial later.

After the antique mall, Boswell and Trail’s phones are tracked along nearly the same exact path taken by Sydney Loofe as she went to work around noon that day, indicating that the couple had followed her. As she was checking in at 12:01 p.m., Trail is seen on video just feet away from Loofe, who is unaware of Trail and who they believe she had not met at that point. 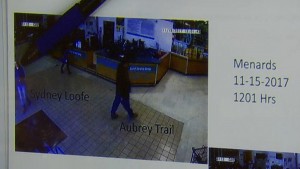 Boswell’s phones are then tracked back to Wilber, where she is again caught on video and verified by a receipt at the Dollar General purchasing bleach, trash bags and laundry detergent. She also returned there the next day, November 16 after her phones had been tracked to rural Clay County and back to Wilber, to buy more bleach and two bottles of Drano, before heading to the Food Mesto to buy another bottle of bleach, more trash bags and a small trash can. 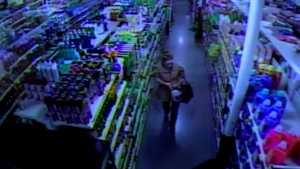 The jury also heard testimony from an FBI forensic DNA analyst Marcy Plaza, who works in the FBI lab in Quantico, Virginia. Plaza testified that 155 pieces of evidence were sent to her lab and distributed to multiple divisions for a variety of testing.

Plaza was given DNA reference samples for Boswell, Trail, Loofe, and three other women who will later testify in the trial; Anastasia Golyakova, Kaitlyn Brandale, and Ashley Hills.

Most notably, pieces of evidence that were obtained from a number of the 17 crime scenes in Clay County tested positive for blood that matched with Sydney Loofe’s DNA reference sample.

The first of those items was a latex glove. Plaza says the blood from the glove was 10-septillion times more likely to be from Sydney Loofe than anyone else, and the remaining five DNA reference samples were excluded from the DNA. 10-septillion has 24 zeros.

Another glove that was tested from a different crime scene in Clay County found DNA on the outside of the glove that also matched Sydney Loofe. Plaza said the DNA was 31-quadrillion times more likely to be from Loofe than anyone else, and the other DNA references samples could be excluded from test. Plaza says a swab was also taken from the inside of the glove, but no DNA could be detected.

Also tested by Plaza was a pair of pajama pants that had been bleached and also found on a crime scene in Clay County. Two stains on the pants tested positive for blood, and when compared with the six DNA reference samples, both stains were consistent with Loofe’s DNA.

Wed Oct 7 , 2020
Concord Youth Theatre announced expanded online and in-person fall programming for children of all ages and skill levels, with instructors with talent and industry experience as well as newly implemented health and safety guidelines to meet COVID-19 precautions. “While we were forced to pause our spring and summer programming due […]