by The global coronavirus has upended many of the metrics used to forecast supply, demand, economic activity and financial stability. Two electronics associations – the IPC and ECIA – report electronics markets are recovering, but forward momentum is decelerating. “The economy improved over the last month, but it is clear […]

The global coronavirus has upended many of the metrics used to forecast supply, demand, economic activity and financial stability. Two electronics associations – the IPC and ECIA – report electronics markets are recovering, but forward momentum is decelerating.

“The economy improved over the last month, but it is clear that momentum is slowing and future growth will likely be more difficult to come by,” said the IPC in its September Economic Outlook Report. The ECIA’s latest Covid-19 impact survey found a supply chain that has returned to its healthiest condition since early 2020, but also notes ongoing uncertainty related to the global pandemic.

Both groups agree on positive signs: U.S. factory activity is rebounding. August’s manufacturing index, the PMI, exceeded expectations. The PMI rose 1.8 percent to 56 percent in August, compared with 54.2 percent in July, according to the Institute for Supply Management. New orders reached 67.6, up 6.1 percent from the prior month – its highest level since January 2004. Any number above 50 signals industry expansion.

ECIA cited a recent Wall Street Journal article on global trade, which is recovering more quickly than expected. New export orders in August grew in 14 of 38 economies, according to IHS Markit, compared with only four in June.  In addition, ECIA said major ports in China are surpassing 2019 shipments with increasing frequency and South Korean exports were only 0.2 percent below the same period in the prior year for the first 10 days of September.

“As the electronics industry benefits from global trade, this report is a highly encouraging indicator,” said Chief Analyst Dale Ford. ECIA’s survey also indicated a lessening impact from coronavirus quarantines on electronics operations and the workforce.

In Europe, IPC reported, manufacturing has recovered a significant portion of ground lost to the pandemic but most sectors remain below pre-pandemic levels. While U.S. and EU manufacturing is expanding, manufacturers remain cautious. New orders and production are expanding on both continents, and backlogs are growing. This, in turn, is keeping prices firm, but manufacturers are not expanding employment, and inventories remain lean.

The brightest outlook is in medical electronics, computers, data processing and telecom infrastructure, according to the ECIA.  The survey results for end-market demand expectations continue to establish a reasonably sturdy platform for electronics component demand through the second half of 2020. Supply chain concerns are ebbing, ECIA added.

Measurements related to on-time delivery; strength of the end-markets and order backlogs; and the health of the supply chain all show highly positive results since August. In measuring expected end-market demand, the overall average for the pandemic’s impact on end-markets was 41 percent for “no change” and 29 percent for a “moderate increase.”

But all 2020 forecasts acknowledge a high level of uncertainty. Covid-19 has closed facilities, disrupted supply chains, limited the number of workers in warehouses and factories and has put small businesses in financial jeopardy.

“Unfortunately, widely reported errors in data meant to track the pandemic and claims of manipulation of results leave businesses and individuals without reliable information to assess the true status and trend of the pandemic,” said Ford.

In certain global regions, Covid-19 infection are on the rise. France has reported a surge in cases, as have parts of the U.S., IPC reports. Economies are extremely fragile right now, and any policy blunders will stymie the recovery.

For example, the association reported, there has been talk in the U.S. of additional fiscal stimulus but little movement forward. On the monetary front, the Federal Reserve remains committed to accommodative policy for several years, and interest rates are expected to stay near zero at least through 2023. The outcome of November’s election will increasingly weigh on sentiment, and uncertainties around another stimulus bill will influence businesses’ investment decisions and Americans’ spending habits.

The European Central Bank (ECB) recently announced it was leaving its policy programs unchanged, but many expect the entity will expand its bond purchase stimulus.

Economic growth forecasts for the Americas and Europe
Source: IPC

There is also growing concern that the expiration of some policy measures might push the economy back into contraction. In the U.S., the expiration of eviction moratoriums will create a headwind. In Europe, the expiration of short-time work benefits could drive layoffs and increase the unemployment rate. Other policy measures will be dictated by economic realities yet to materialize. For example, weakness in the dollar will create a challenge for Europe in the coming year. The Euro continues to strengthen against the dollar, which will support U.S. exports but will likely hurt European exports at a time when manufacturers are working to move operating rates higher.

IPC did a deep dive on the EU and U.S. economies:

In the U.S., economic growth for the second quarter was revised up marginally but did little to offset the worst quarterly decline in history. The economy fell by 31.7 percent (annualized). The prior record was a decline of 10 percent in 1958 (also during a pandemic). The economy is down 9.1 percent from a year ago. The third quarter will show growth in excess of 24 percent (the latest estimate from the Federal Reserve Bank of Atlanta’s GPDNow forecast is 30 percent), the strongest growth recorded in more than 40 years. However, we are still a full year away from a complete recovery and longer for certain sectors of the economy.

Euro-area GDP fell 11.8 percent in the second quarter, slightly better than the originally estimated 12.1 percent but still the lowest on record dating back to 1995. GDP is down 14.7 percent from last year in the euro area and 13.9 percent in the European Union. Spain recorded the biggest drop among member states, falling 18.5 percent, followed by Croatia (14.9 percent), Hungary (14.5 percent) and Greece (14 percent). Finland (-4.5 percent), Lithuania (-5.5 percent) and Estonia (-5.6 percent) saw the lowest declines in GDP. Gross fixed capital formation decreased by 17 percent in the euro area, subtracting 3.8 percentage points from GDP growth.

The Organization for Economic Co-operation and Development (OECD) recently raised its outlook for the global economy for 2020, IPC reported. The OECD now says the world economy shrank by 4.5 percent, up from its June forecast of a 6 percent decline. While the economy is doing better than anticipated, it isn’t great. Only China will see positive growth in 2020 among the G20 countries.

Tue Sep 29 , 2020
What happens when a decidedly non-glamorous sector shows strength? Making money is always the goal of investors, so it can pay to understand what’s happening with a sector that doesn’t get much love in the media.  One of those so-called “boring” sectors, materials, is up 4% in September, and more […] 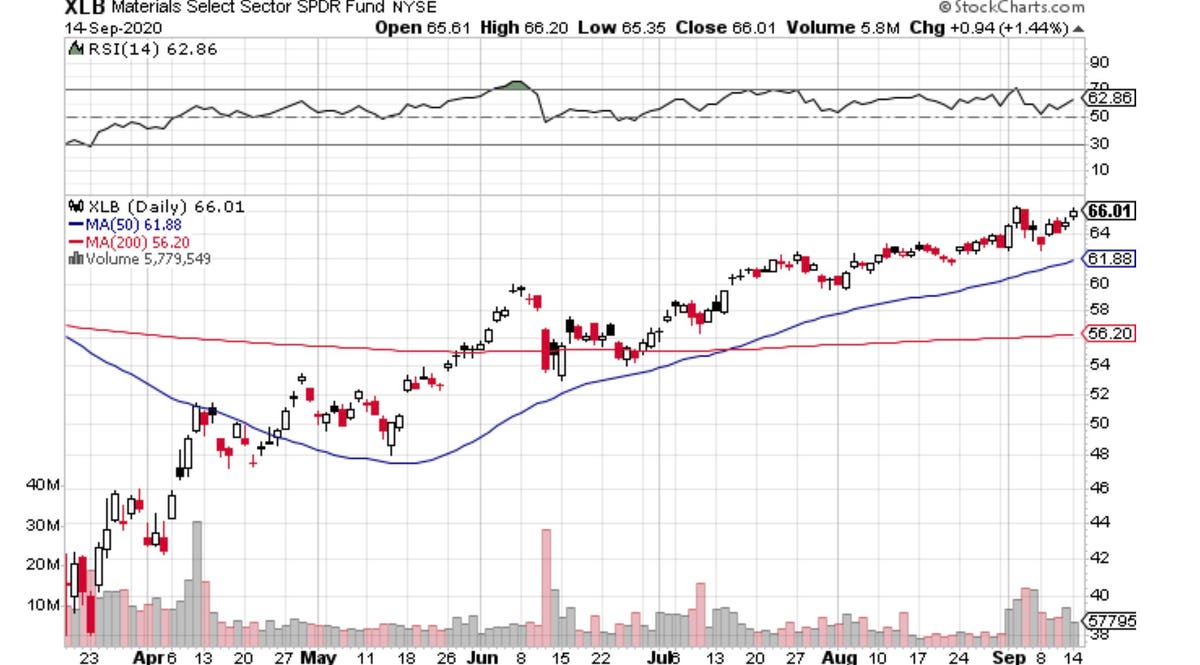