Sept 14 (Reuters) – SoftBank Group Corp announced on Monday the sale of chip designer Arm to Nvidia Corp for as much as $40 billion in a deal set to reshape the semiconductor landscape. The deal, which is subject to regulatory approvals including in Britain, the United States and China, […]

Sept 14 (Reuters) – SoftBank Group Corp announced on Monday the sale of chip designer Arm to Nvidia Corp for as much as $40 billion in a deal set to reshape the semiconductor landscape.

The deal, which is subject to regulatory approvals including in Britain, the United States and China, will be putting a long-neutral technology vendor to Apple Inc and others under the control of a single player.

It could face potential pushback from regulators, as the ongoing U.S.-China tech spats have put any global deal in the semiconductor sector under much tighter scrutiny.

Below are a list of prominent global deals that collapsed due to regulators’ rejection in the last five years:

* Qualcomm Inc walked away from a $44 billion deal to buy NXP Semiconductors after failing to secure Chinese regulatory approval in July, 2018 amidst China-U.S. trade talks. China’s State Administration for Market Regulation (SAMR), the antitrust regulator reviewing the deal, did not respond to the companies after the deadline for the deal to expire passed.

* Semiconductor equipment maker Lam Research Corp in 2016 terminated its $10.6 billion deal to buy rival KLA-Tencor Corp after the U.S. Department of Justice told the companies it had serious concerns that the deal would harm competition.

Some global deals were able to get China’s approval after making some changes or concessions:

* China approved Google’s $12.5 billion acquisition of Motorola in 2012 on the condition that Google keep Android free and available without discriminating against any particular device maker for five years.

* Glencore in 2014 sold a $5.2 billion mining project in order to win China’s approval for its $30 billion takeover of miner Xstrata.

* Nokia in 2015 had to combine its China business with former Alcatel-Lucent’s in the country for its 15.6 billion euro merger with the French company to be approved by China. Beijing also stipulated that local telecoms groups could renegotiate rates on mobile technology patents borrowed from Nokia and Alcatel if they were ever sold on to a third party.

* Bayer secured conditional approval from China’s commerce ministry for its $65 billion acquisition of the world No. 1 seed company Monsanto in 2018 after agreeing to offload certain assets. (Reporting by Kane Wu in HONG KONG, additional reporting by Pei Li; Editing by Sumeet Chatterjee and Lincoln Feast.)

Sun Sep 27 , 2020
Technavio has been monitoring the digital signage market and it is poised to grow by $ 10.01 bn during 2020-2024, progressing at a CAGR of over 8% during the forecast period. The report offers an up-to-date analysis regarding the current market scenario, latest trends and drivers, and the overall market […] 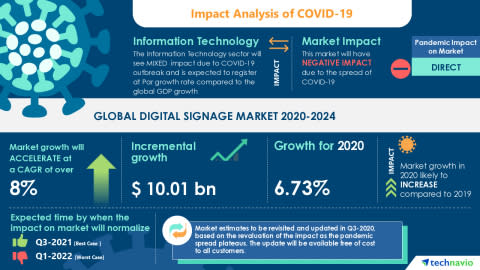