When it comes to what it takes to get into the Hussman School, Tuggle said that showing a specific passion for media and journalism is key.

Tuggle said in essays, he wants to see students who are personally connected to media and journalism, such as having a background in the field before applying.

“I’m looking for folks who demonstrate that fire in the belly,” he said. “If, on top of that, they embrace the Hussman principles, that’s a really good candidate.”

Wendell Gilland, associate dean of the undergraduate business program at UNC, said that while the application process has stayed the same for the most part, the biggest difference on the admissions side was UNC’s new pass/fail policy.

“One of the things we have had as a benchmark to assess people’s ability to learn the types of material that they need as part of the business major is how they’ve done in their prerequisite courses — so it’s a little more difficult to assess that given that many students are going to be submitting courses that are graded pass/fail,” Gilland said.

With regard to inclusion in the admissions process, Gilland said that the business school has been focusing on creating a diverse application pool.

“Now that we’ve specifically articulated inclusion as one of our core values, we’ll hopefully make that message more clear across campus,” he said. “Of the applicants that we’ve received, this pool, 17 percent are part of an underrepresented minority, 12 percent are first-generation college students and so those are numbers that we track very carefully and are always striving to increase.”

For the application itself, Gilland said that it is crucial to be well-rounded. He said the biggest problem he sees in applicants are people who focus on academics without looking for ways to be engaged in the UNC community. He said he wants to see people who are engaged with the application process and the business school process.

“The more involved somebody can be in the business school process during that first year, the better,” he said. “All of our clubs at the business school are open to first-year students, so that’s a great opportunity for someone to show that they’ve got a true, genuine interest in business.

“Expressing that interest and showing actions that back up that expression are really critical.”

A word of advice for future applicants

While receiving admissions results can be an important moment in a student’s life, C.J. Skender, a UNC accounting professor, said he cautions students against placing too much importance on acceptance to a particular school.

“It’s not something to stress about,” he said. “There’s going to be other things along the line, it’s just one of many things that you apply for over many years,” he said.

Skender said to also be aware of other options besides one ideal school.

Sun Oct 4 , 2020
Enlarge / US President Donald Trump speaks during a news conference in which he frequently contradicted his own health experts. Covid-19 Coverage View more stories There was good news and then bad news for public health expertise yesterday. In the wake of increasingly unhinged behavior from a President Trump-appointed communications […] 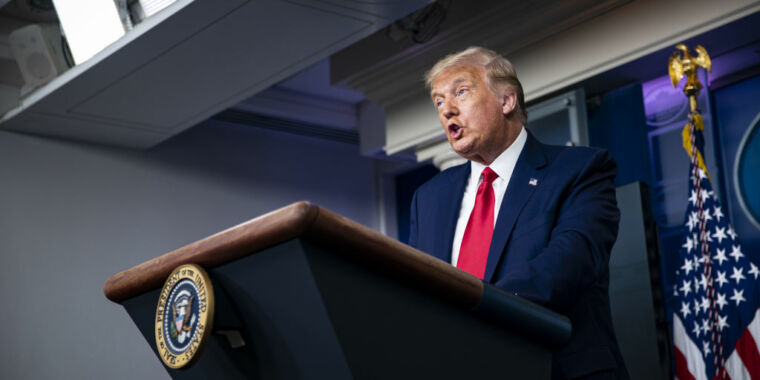