BENGALURU: Food, grocery, consumer electronics and apparel will be the top e-commerce categories in the next five years, contributing nearly $64 billion in gross sales, said a white paper by management consultancy Technopak. E-commerce at present contributes to just 4% of overall retail mediums in India. This will eventually double […]

BENGALURU: Food, grocery, consumer electronics and apparel will be the top e-commerce categories in the next five years, contributing nearly $64 billion in gross sales, said a white paper by management consultancy Technopak.

E-commerce at present contributes to just 4% of overall retail mediums in India. This will eventually double to around 8% by 2025.

The e-tailing opportunity in 2019-20 stood at $37 billion and will more than double to around $88 billion by 2025. Other categories, such as pharmacy, wellness, footwear, jewellery, watches, and home furnishings will also contribute to e-commerce growth in the next five years, Technopak said.

Consumer electronics had 26% online penetration in FY20 and a 6% share of organized modern retail, while the remaining sales came from unorganized retail. However, online retail penetration of the electronics category will grow to just 28% by FY25, the paper said.

Groceries and food, on the other hand, witnessed 0.5% online retail penetration in FY20 with an estimated increment to around 4% by FY25. Apparel and accessories had a higher online retail presence with 14% in FY20 and is expected to be around 18% by FY25, according to the white paper’s estimates.

In FY20, India’s modern retail penetration stood at 12% ($101 billion), having grown from less than 8% in FY12. In the next five years, modern retail is expected to grow at a 15% compound annual growth rate to reach 18% of the overall retail market share by FY25.

“Till now, modern retail was viewed in the distinct groups of brick-and-mortar retail and e-tail. However, it will witness a convergence and digital commerce will become central to the growth of modern retail. Pure brick-and-mortar retailers will increasingly adopt digital technologies for accelerated growth and pure e-tailers will appreciate the importance of brick (offline) assets, and reach out to be plugged in for accelerated growth plans,” the white paper said.

Mint had reported that e-tailers have been betting big on expanding their physical presence despite the disruptions that have resulted from the coronavirus outbreak. For instance, beauty retailer Nykaa opened three stores in August and plans to launch another 10-15 soon. Furniture e-tailer Pepperfry, which has more than 60 studios across 20 cities, plans to add 20 more by March 2021.

Omni-channel retail formats that were earlier adopted by retail majors in discretionary categories such as fashion, home furniture, and jewellery was a non-focus area in India before covid-19 hit the country. However, e-commerce as a share of their retail sales contributed 10%-15% of their total sales. This share is expected to grow further with most big retailers aiming to speed up their digital distribution.

* Thank you for subscribing to our newsletter.

Sat Oct 3 , 2020
Technavio has been monitoring the explosive detection equipment market and it is poised to grow by $ 2.72 bn during 2020-2024, progressing at a CAGR of over 7% during the forecast period. The report offers an up-to-date analysis regarding the current market scenario, latest trends and drivers, and the overall […] 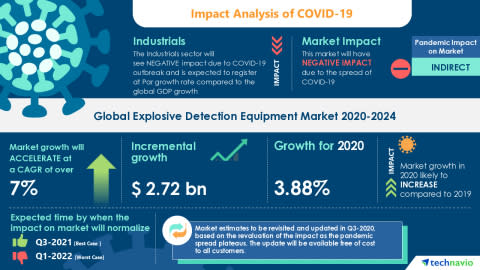