Jordyn Brown   | Register-Guard When the Holiday Farm Fire first started overtaking the eastern part of Lane County in early September, people in the community looked for ways to jump in and help however they could.  For Solomon Singer, that meant revving up his drone. Singer was able to use […]

When the Holiday Farm Fire first started overtaking the eastern part of Lane County in early September, people in the community looked for ways to jump in and help however they could.

For Solomon Singer, that meant revving up his drone. Singer was able to use an unmanned aerial system — or drone — to help firefighters identify hot spots and spot fires as they tried to contain the blaze.

Singer is an instructor in Lane Community College’s Commercial Unmanned Aerial Systems program. While the program is new — it’s been around for two years — it’s already gained interest among students and proven useful for the community.

During the first week of the Holiday Farm Fire, there was an inversion layer of smoke that reduced visibility. Already-scarce air resources such as manned aircrafts couldn’t often fly to better understand the movement of the fire.

Singer is a firefighter with the fire protection district, he said, and was contacted by Goshen Fire Department, which is starting to use drones, for input. Seeing the opportunity to help, he offered and got approval to help crews see the fire by using the infrared camera on his drone.

“In the thickest smoke, nothing can fly,” he said. “There was no air support, nobody really knew exactly where the fires were until that infrared imagery came out once a day. And so there was some question when it was growing quickly, in this thick smoke nobody exactly knew where the south border was.”

So Singer worked with the Oregon Department of Forestry to get emergency authorization from the Federal Aviation Administration to fly in the airspace above the fire.

To fly a drone in a fire zone, you need specific training and clearance from the FAA. People who independently fly drones above a fire zone hinder firefighting efforts because if drones are flying, fire crews can’t fly their own air resources, ODF spokesman Marcus Kauffman said. People who fly over a fire zone without authorization could face a $20,000 fine from the FAA and potential criminal prosecution.

Singer has had his private pilot license since he was 17, which is the youngest you can get it, and flown drones for years. Using these skills and LCC’s infrared drone, Singer ran scouting flights to get footage of the fire and even helped identify one area firefighters hadn’t learned of yet, before it spread to homes.

“I was just doing a routine scout up Little Fall Creek Road, and I saw a fire that was about half-acre and growing, and nobody knew about it,” Singer said.

The fire was separate from the Holiday Farm Fire, but with scarce resources that week as fires burned across the state, it was crucial firefighters get any new fires under control before they created more devastation. Singer alerted firefighters in the area, who were able to put it out quickly.

Since the Holiday Farm Fire’s peak, Singer has spent several full days with the drone scouting in the Hills Creek and Little Fall Creek areas. He focused on the south and west faces of the fire, he said, tracking its progress and giving fire behavior reports.

“Any of these larger fires, whether it was Holiday Farm or Sweet Creek or Beachie … they require a tremendous amount of local cooperation and pulling resources together that previously hadn’t worked together,” Kauffman said.

They’ve had cooperation from rural fire departments, of course, but also private industries, the State Fire Marshal and, in this case, a skilled instructor from LCC.

“That’s kind of the name of the game is cooperation, and I think it’s great that the local folks are building up their capacity to be able to assist with these kinds of efforts, because technology is a great tool to help us see and respond to these fires, particularly when we have an inversion (layer),” Kauffman said.

It’s has opened Singer’s eyes to some new lessons he can bring back to the classroom.

There about 20 students in LCC’s drone program right now, he said. It’s a two-year program, so they’re at different stages. They go through flight labs and learn hands-on pilot work and earn their remote pilot license through the FAA.

“It’s a perfect opportunity for them to map fire damage areas,” Singer said. “Or a long-term project of mapping the extent of the fire, and the regrowth of forest in the areas that were burned with hyperspectral image analysis and plant growth analysis. With some of the advanced drones that we have, we can do those long-term studies and really get some valuable data.”

Singer hopes students will be able to contribute to a better understanding of the scope and lasting impacts of the fire through the program, and develop the same skills that allowed him to help fire crews this season.

“Home-field advantage is definitely not the same”

Mon Oct 5 , 2020
Cardinals wide receiver Larry Fitzgerald is in his 17th NFL season, but he has never experienced a season like this one. This season, with stadiums either empty or at significantly reduced capacity, Fitzgerald says the lack of crowd noise makes it easy to hear quarterback Kyler Murray in the middle […] 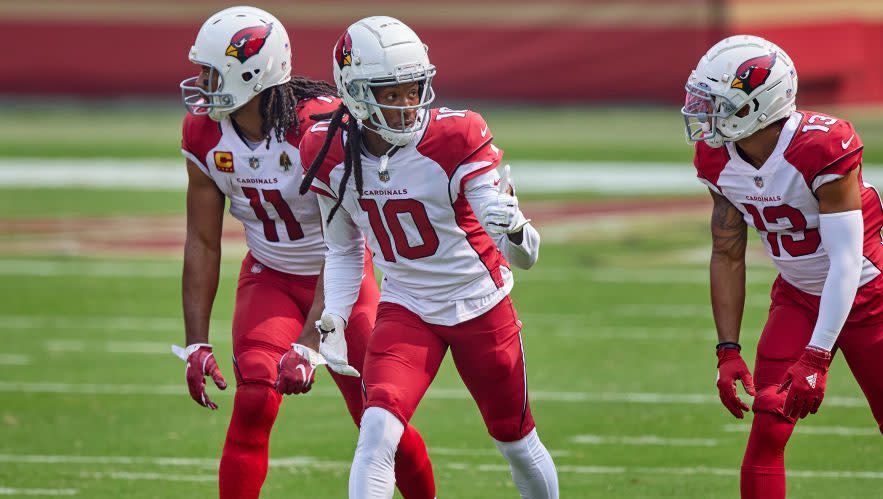