Holyrood Connect’s Cloud Services in the Public Sector 2020 event report Talk of ‘the cloud’ was present long before the current situation, but the sudden shift to working from home has made cloud infrastructure all the more important.  The flexibility and resilience cloud-working has enabled in recent months were the key themes of this year’s Holyrood Connect conference on Cloud Services in […]

Talk of ‘the cloud’ was present long before the current situation, but the sudden shift to working from home has made cloud infrastructure all the more important.

The flexibility and resilience cloud-working has enabled in recent months were the key themes of this year’s Holyrood Connect conference on Cloud Services in the Public Sector – suitably held online.

“The current COVID pandemic has seen huge changes in the way that we’re all working and living our lives just now.

“There’s been a huge explosion of cloud use and cloud-based tools and applications across the world,” the Scottish Government’s transformation manager of its cloud 1st programme, Ross Lyon, told the conference in the opening session.

But there is also a general feeling that if the cloud agenda had been more advanced when lockdown hit, the move to working from home would have been more seamless.

There’s been a huge explosion of cloud use and cloud-based tools and applications across the world.

It was perhaps no surprise then, when the Scottish Government recommitted to its cloud-first approach in June, which will see cloud be the default delivery model for public services, supported by a cloud community.

Nia Lewis, the Scottish Government’s cloud service manager, said: “The idea of the cloud community was to join people together so that we could share that best practice. We are by no means to experts of it, but we know that there’s great work being done out there.

“We’re open in the medium and longer term to working in partnership with other public sector organisations if there’s the right opportunity for us to be able to do that. I’m really hopeful that we can do that once we’ve established our baseline.”

Indeed, the first panel session of the conference focused on Oxford University’s successful deployment of cloud technology – in this case Amazon Web Services – to create an online database of its museum collections.

The project is a good example of why the Scottish Government is keen to move to a cloud-first approach. It operates efficiently and almost instantly for users, is a flexible enough system to be deployed for the university’s other collections and is cost-effective as it runs on pay-as-you-go.

As conference chair Jos Creese, CEO of tech consultancy CCL, summed up: “The point about bringing a collection to life is for education, for everybody’s enjoyment. Given COVID-19, the practical application of cloud to overcome some of the problems people have with isolation – let alone the business benefits that it’s bringing our public service organisations – is enough to justify [the move to cloud].”

If flexibility and efficiency were talking points of day one of the conference, security and resilience were those of day two.

Digital is all about doing two basic things: one is… to make things better; and the other is introducing new services or products

A session on embedding IT resilience highlighted the extent of these problems in Scotland’s public sector. Recent audits of public bodies found over a third had weak or unacceptable data recovery capability, and backup and disaster recovery procedures, while almost two-third had poor business continuity and disaster recover testing policies.

Deryck Mitchelson, the director of digital and information security at NHS National Services for Scotland (NSS) illustrated the problem well: “We didn’t get it quite right when we got hit by the pandemic in March. What happened is we had some of our areas which weren’t able to operate on laptops or didn’t have laptops, they were desktops.

“When people were asked to work from home, suddenly everyone was scrambling around trying to find laptops for people to work on, or virtual desktops for people to use. Even though we thought we were pretty good with our business continuity planning at NSS, we found some of the basics, such as laptops, weren’t in place.”

Zerto’s Michael Murphy spoke at length about the benefits of continuing data protection, which ensures any recovery process is consistent and speeds up restoration – particularly in the wake of cyberattacks, which the vast majority of public sector organisations have been victims of.

The final panel of the conference looked at how to make the journey to cloud and what approaches could be used. The emphasis was on not just creating replicas of organisations through cloud but releasing resources better used elsewhere.

The chief officer of digital and technology at Aberdeen City Council, David Gammie, summed up the conference well when he said: “Digital is all about doing two basic things: one is using technology and the cloud to make things better; and the other is introducing new services or products that could never have been delivered without it.

“If you keep those two at the heart of it, then you can start to explore with all the peers at senior levels about where to go.”

Fri Oct 9 , 2020
The global application lifecycle management market size is poised to grow by USD 1.78 billion during 2020-2024, progressing at a CAGR of over 9% throughout the forecast period, according to the latest report by Technavio. The report offers an up-to-date analysis regarding the current market scenario, latest trends and drivers, […] 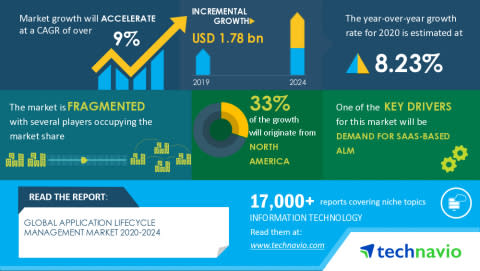