If Joe Biden becomes the 46th president of the United States, he will walk into the Oval Office with a mountain of problems in front of him, but perhaps none more pressing than the climate crisis. The United Nations’ Intergovernmental Panel on Climate Change has said that we only have […]

If Joe Biden becomes the 46th president of the United States, he will walk into the Oval Office with a mountain of problems in front of him, but perhaps none more pressing than the climate crisis. The United Nations’ Intergovernmental Panel on Climate Change has said that we only have until the end of this decade to reduce greenhouse gas emissions to 45% below 2010 levels, and until 2050 to reach net zero. So far, we are way behind on meeting those goals, in no small part because of the Trump administration’s ongoing attempts to undermine environmental policy to the point that former EPA employees have created a plan to completely reset the agency to undo his damage.

Sharing the ticket with Biden is Kamala Harris, a candidate with a surprisingly strong record on environmental issues, particularly when it comes to environmental justice. But Biden has held elected office since 1970, around the time that global surface temperature started to consistently rise. He has been in a position for half a century to make policy that would help to address our current crisis. So how well does Biden’s record on the environment hold up, and does it suggest that he will be able to rise to the occasion at a time that environmental action is needed most?

It’s fair to say that environmental issues have not necessarily been the calling card of Biden’s political career. But his record does suggest that he has some environmental policy chops dating as far back as the 1980s when he was serving in the Senate. While Biden has often been presented as a moderate, he has recently reframed some of his past votes to position himself as a leader when it comes to climate change. Last year, he started touting himself as “one of the first guys to introduce a climate change bill, referring to his proposed Global Climate Protection Act, which he introduced on the Senate floor in 1987.

Elizabeth Gore, the Vice President of EDF Action, the advocacy partner of Environmental Defense Fund, tells Mic that Biden’s proposal “pushed legislation directing the government to research a strategy for dealing with global warming,” at a time when “the issue was just starting to bubble to the surface.” The bill, which called for the EPA to establish a national policy on climate change and deliver annual reports to Congress, was signed into law on December 12, 1987, though its impact is questionable. Reed College history professor Josh Howe described the bill to Politifact as “a plan to make a plan, which, of course, neither Reagan nor Bush ultimately did.”

On the whole, Biden has largely been on the right side of history when it comes to his environmental voting record. According to the League of Conservation Voters, Biden cast pro-environment votes 83 percent of the time over the course of his 36 years in the Senate. In most cases, he was simply lending his vote rather than proposing the legislation, and actual successes in passing those bills paints a less impressive picture. That, though, has much to do with the political makeup of the Senate, which was under Republican control for the majority of Biden’s time in Congress. “Joe Biden has a long and clear record of support for ambitious action to address the climate crisis,” Tiernan Sittenfeld, Senior Vice President of Government Affairs for the LCV Action Fund, the advocacy arm of the League of Conservation Voters, tells Mic.

However, Biden’s longevity in the Senate, and occasional tendency to seek out middle ground solutions on issues, has left some black marks on his record. For years, Biden opposed introducing higher fuel efficiency standards for vehicles, voting against such protections on five occasions dating as far back as 1973. He did eventually come around on the issue in 2007, but spent decades being part of the voting bloc that allowed increased air pollution from cars and trucks. Perhaps the biggest flaw on Biden’s record in the Senate came shortly before he took the office of Vice President, when he failed to show up for a vote on the Lieberman-Warner Climate Security Act in 2008. The bill, believed to be one of the strongest efforts to curb global warming at the time, would have reduced the country’s greenhouse emissions by up to 19 percent below 2005 levels by 2020. Though it would not have passed with his vote, having his support on the record would have helped set a strong tone for his position on climate change.

Biden’s complicated history on the climate continued while he served as Vice President from 2009 to 2017. Compared to the administrations before it, the Obama and Biden White House provided one of the most proactive approaches to climate change. “Under the Obama-Biden administration, our country made enormous advancements in cutting carbon and other climate-disrupting pollution, transitioning away from dirty fuels, and increasing clean energy deployment,” Matthew Gravatt, PAC Director at Sierra Club, tells Mic. Gore points to the administration’s work on the landmark Paris Climate Agreement, a massive, global undertaking that was the first to set clear goals for reducing greenhouse gas emissions globally.

Biden has positioned himself as one of the driving forces behind the Paris Climate Agreement, though reports indicate that he was considerably less involved in the effort than he has claimed. He also has been tied to some of the Obama administration’s less forward-thinking policies, including the embrace of natural gas and fracking that put the country on track to becoming the world’s leading oil producer.

However, that’s not to say Biden didn’t play a role in driving the administration’s position on climate change. When he and Obama took office in 2009, the country was in the midst of an economic crisis. To address that issue, they passed the American Recovery and Reinvestment Act, an $800-billion stimulus package designed to breathe new life into the economy. Buried in that bill was about $90 billion designated specifically for clean energy projects, including electric vehicles, renewable energy infrastructure, and training for green jobs. “[Biden] was a driving force of the 2009 bill that saw the biggest investment in clean energy in history,” Gore says. “Joe Biden pushed that bill through, he was the point person in the administration for that bill.”

During his presidential campaign, Biden has been sure to highlight some of his highest points and proudest achievements when it comes to the environment while also trying not to push away moderate voters. His early candidacy sought to find what it called a “middle ground approach” to addressing the climate crisis, and his campaign’s initial promises fell so short that the activist Sunrise Movement gave his climate plan an F- grade. However, since winning the nomination, Biden has shifted to a position that more closely resembles what climate advocates are looking for.

Earlier this year, he proposed a $2 trillion environmental plan that would seek to put the country on what he called “an irreversible path” to net-zero carbon emissions by 2050. Sittenfeld told Mic that Biden’s plan would amount to the “largest ever investment in clean energy,” and Gravatt said, “the Biden-Harris ticket is the strongest ever for proposed climate action.” Those proposals will have to actually be enacted, should the ticket win, but Biden brings about five decades worth of good intentions to the table and a clear interest in addressing climate change.

Tue Sep 29 , 2020
New Delhi: Migrant workers suffered the worst of the 68-day nationwide lockdown due to job losses that made them walk miles to reach their home states without shelter or any means of transportation. While scores of them died due to the restrictions imposed, the government has “no such data available” […] 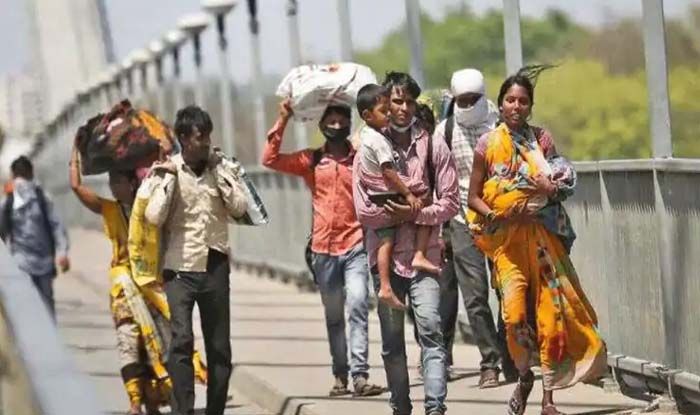