Kareena Kapoor Khan shared a new photograph of her son, Taimur Ali Khan on Instagram. In the photo, the little munchkin can be seen holding a bat and standing on a cricket pitch. Taimur has an adorable expression on his face as he looks forward, probably waiting for the ball so that he can strike.

Kareena Kapoor Khan captured the moment and shared it on Instagram with the caption, “Any place in the IPL? I can play too (sic).”

Kareena joined Instagram earlier this year and since then has been sharing constant updates with her fans. The actress often shares photos of her son, Taimur, and husband, actor Saif Ali Khan.

AMRITA ARORA IS ALL HEARTS FOR TAIMUR ALI KHAN’S PHOTO

Take a look at their reactions here:

WHEN WAS TAIMUR ALI KHAN BORN?

Saif Ali Khan and Kareena Kapoor tied the knot in an intimate wedding ceremony in 2012. They welcomed their son, Taimur Ali Khan, in December 2016. Saif was earlier married to Amrita Singh and has two children, Sara Ali Khan and Ibrahim Ali Khan, with her.

On August 12, news broke that Kareena Kapoor Khan and Saif Ali Khan are expecting their second child. The couple issued a statement that read, “We are very pleased to announce that we are expecting an addition to our family!! Thank you to all our well wishers for all their love and support. — Saif and Kareena.” Their baby will be a coronial.

Tue Oct 13 , 2020
BEIJING, Sept. 27, 2020 /PRNewswire/ — SANY unveiled full battery electric version of its truck mixers, which are scheduled to be under the spotlight at bauma CHINA 2020. The light-weight designed model is equipped with permanent magnet synchronous motors with maximum 350 kW in power output and 2800 N·m in […] 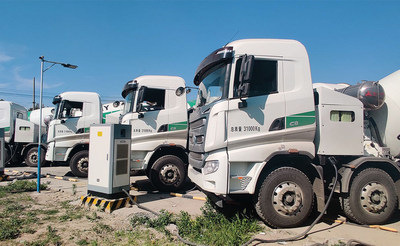