The New York Times – The two soldiers confess their crimes in a monotone, a few blinks of the eye their only betrayal of emotion: executions, mass burials, village obliterations and rape. The August 2017 order from his commanding officer was clear, Pvt. Myo Win Tun said in video testimony. […]

The New York Times – The two soldiers confess their crimes in a monotone, a few blinks of the eye their only betrayal of emotion: executions, mass burials, village obliterations and rape.

The August 2017 order from his commanding officer was clear, Pvt. Myo Win Tun said in video testimony. “Shoot all you see and all you hear.”

He said he obeyed, taking part in the massacre of 30 Rohingya Muslims and burying them in a mass grave near a cell tower and a military base.

Around the same time, in a neighboring township, Pvt. Zaw Naing Tun said he and his comrades in another battalion followed a nearly identical directive from his superior: “Kill all you see, whether children or adults.”

“We wiped out about 20 villages,” Zaw Naing Tun said, adding that he, too, dumped bodies in a mass grave.

The two soldiers’ video testimony, recorded by a rebel militia, is the first time that members of the Tatmadaw, as Myanmar’s military is known, have openly confessed to taking part in what U.N. officials say was a genocidal campaign against the country’s Rohingya Muslim minority.

On Monday, the two men, who fled Myanmar last month, were transported to The Hague, where the International Criminal Court has opened a case examining whether Tatmadaw leaders committed large-scale crimes against the Rohingya.

The atrocities described by the two men echo evidence of serious human rights abuses gathered from among the more than 1 million Rohingya refugees now sheltering in neighboring Bangladesh. What distinguishes their testimony is that it comes from perpetrators, not victims.

“This is a monumental moment for Rohingya and the people of Myanmar in their ongoing struggle for justice,” said Matthew Smith, chief executive officer at Fortify Rights, a human rights watchdog. “These men could be the first perpetrators from Myanmar tried at the ICC, and the first insider witnesses in the custody of the court.”

The New York Times cannot independently confirm that the two soldiers committed the crimes to which they confessed. But details in their narratives conform to descriptions provided by dozens of witnesses and observers, including Rohingya refugees, Rakhine residents, Tatmadaw soldiers and local politicians.

And multiple villagers independently confirmed the whereabouts of mass graves that the soldiers provided in their testimony — evidence that will be seized on in investigations at the International Criminal Court and other legal proceedings. The Myanmar government has repeatedly denied that such sites exist across the region.

The crimes that the soldiers say were carried out by their infantry battalions and other security forces — some 150 civilians killed and dozens of villages destroyed — are just a part of Myanmar’s long campaign against the Rohingya. And they portray a concerted, calculated operation to exterminate a single ethnic minority group, the issue at the heart of ongoing genocide cases.

The massacres of Rohingya that culminated in 2017 catalyzed one of the fastest flights of refugees anywhere in the world. Within weeks, three-quarters of a million stateless people were uprooted from their homes in Myanmar’s western Rakhine state, as security forces attacked their villages with rifles, machetes and flamethrowers.

Old men were decapitated, and young girls were raped, their headscarves torn off to use as blindfolds, witnesses and survivors said. Doctors Without Borders estimated that at least 6,700 Rohingya, including 730 children, suffered violent deaths from late August to late September 2017. Roughly 200 Rohingya settlements were completely razed from 2017 to 2019, the United Nations said.

In a report published last year, a fact-finding mission for the U.N. Human Rights Council said “there is a serious risk that genocidal actions may occur or recur and that Myanmar is failing in its obligation to prevent genocide, to investigate genocide and to enact effective legislation criminalizing and punishing genocide.”

The Myanmar government has denied any orchestrated campaign against the Rohingya. In December, Aung San Suu Kyi, the nation’s civilian leader, defended Myanmar against charges of genocide in another case, this one at the International Court of Justice in The Hague. A Nobel Peace Prize laureate, Suu Kyi has seen her legacy tarnished by her support for the military and her refusal to vocally condemn the persecution of the Rohingya.

Only a few Tatmadaw soldiers have been punished, with brief prison terms, for what the military says were isolated missteps in a couple of villages.

Although the Rohingya are from Rakhine state in Myanmar, the country’s government claims that they are foreign interlopers. Myanmar officials have suggested that the Rohingya burned down their own villages to garner international sympathy.

It is not clear what will happen to the two men, who are not under arrest but were effectively placed in the custody of the International Criminal Court on Monday. They could provide testimony in court proceedings and be put in witness protection. They could be tried. The court’s office of the prosecutor refused to publicly comment on an ongoing case, but two people familiar with the investigations said that the men had already been questioned extensively by court officials in recent weeks.

The International Criminal Court normally pursues prosecutions of high-level figures accused of grave offenses such as genocide or crimes against humanity, not rank-and-file soldiers.

Payam Akhavan, a Canadian lawyer who is representing Bangladesh in a filing against Myanmar at the International Criminal Court, would not comment on the identities of the two men. But he called for accountability to prevent further atrocities against the 600,000 Rohingya who remain in Myanmar.

“Impunity is not an option,” Akhavan said. “Some justice is better than no justice at all.”

The soldiers’ accounts will also add weight to the separate case at the International Court of Justice, where Myanmar is being accused of trying to “destroy the Rohingya as a group, in whole or in part, by the use of mass murder, rape and other forms of sexual violence, as well as the systematic destruction by fire of their villages.”

That case was filed last year by Gambia on behalf of the 57-nation Organization of Islamic Cooperation. Last week, the Netherlands and Canada announced that they would provide legal support to the effort to hold Myanmar accountable for genocide, calling it a matter “of concern to all of humanity.”

In August 2017, the 353 and 565 Light Infantry Battalions conducted “clearance operations” in the areas where the men said they did, Buthidaung and Maungdaw townships. Commanding officers whom Myo Win Tun said ordered him to wipe out the Rohingya — Col. Than Htike, Capt. Tun Tun and Sgt. Aung San Oo — were operational there at the time, according to fellow soldiers.

There is a cell tower close to the 552 Light Infantry Battalion base, on the outskirts of Taung Bazar town, near where Myo Win Tun said he helped dig a mass grave. The base is well known in the area because it, along with two dozen border guard posts, was attacked by Rohingya insurgents on Aug. 25, 2017, galvanizing the brutal military operations against Rohingya civilians.

Rohingya refugees who lived in a village adjacent to the 552 encampment said they recognized Myo Win Tun. They described in precise detail the locations of two mass graves in that area. Residents still in the region, who spoke with The Times, also said they knew of mass burial sites near the military encampment.

Basha Miya, who is now a refugee in Bangladesh, said his grandmother was buried in one of the mass graves by the base, along with at least 16 others from the neighboring village of Thin Ga Net, known in the Rohingya language as Phirkhali.

“When I remember her, I just cry,” he said. “I feel bad that I couldn’t give her a proper funeral.”

After soldiers dumped the bodies in two graves by the banks of canals, they brought in bulldozers to cover the corpses, eyewitnesses said. Myo Win Tun said he and others buried eight women, seven children and 15 men in one grave.

Thin Ga Net village was wiped from the map by fire. Today, only a couple of water reservoirs hint that a bustling Rohingya village once stood there.

As they marauded through the villages around Taung Bazar, Myo Win Tun, 33, seems to have lost track of how many Rohingya he and his battalion killed. Was it 60 or 70? Maybe more?

“We indiscriminately shot at everybody,” he said in video testimony. “We shot the Muslim men in the foreheads and kicked the bodies into the hole.”

He also raped a woman, he said.

Zaw Naing Tun, a former Buddhist monk, admits to a similar fog, as his battalion’s killing of some 80 Rohingya stretched from hours into days. The soldier said he and other members of his battalion stormed through 20 villages in Maungdaw township, including Doe Tan, Ngan Chaung, Kyet Yoe Pyin, Zin Paing Nyar and U Shey Kya.

Some of these villages were burned to the ground. Bashir Ahmed said that Tatmadaw battalions entered his hometown, Zin Paing Nyar, early on Aug. 26, 2017.

“They opened fire whenever they found someone in front of them,” he said. “They burned our houses. Nothing is left.”

More than 30 residents were killed in Zin Paing Nyar, according to survivors’ testimony.

Zaw Naing Tun, 30, said that he and four other members of his battalion shot dead seven Rohingya in Zin Paing Nyar. They captured 10 unarmed men, tied them with ropes, killed them and buried them in a mass grave north of the village, he said in the video testimony.

There are some discrepancies between the soldiers’ accounts and those of Rohingya villagers. Myo Win Tun described the cell tower as being east of the 552 base when it is, in fact, southwest.

But most of the other details are corroborated by statements from witnesses and survivors. In Ngan Chaung village, part of which was spared destruction, five or six soldiers from Light Infantry Battalion 353 arrived one afternoon in late August 2017 and singled out five women for rape, said a resident who still lives in the hamlet. The women’s husbands were later killed, he and other residents said.

Zaw Naing Tun said he didn’t commit sexual violence because he was too low-ranking to participate. Instead, he stood sentry as others raped Rohingya women, he said.

Both of the soldiers who admitted to killing Rohingya are themselves members of ethnic minorities in a country where persecution of such groups is institutionalized.

Earlier this year, the pair ended up in the custody of the Arakan Army, an ethnic Rakhine militia currently fighting the Tatmadaw, which recorded their video confessions. Both men said they deserted from the Tatmadaw.

Desertion is a particular problem in ethnic minority conflict zones, military insiders say. About 60 soldiers are believed to have gone AWOL from Light Infantry Battalion 565.

“I was racially discriminated against,” Myo Win Tun, a member of the Shanni ethnic group, said in his video testimony, in a rare burst of feeling.

Later, he would describe, in a flat voice, how his commanding officer, Than Htike, had instructed the battalion to “exterminate” the Rohingya.

“I was involved in the killing of 30 Muslim innocent men, women and children buried in one grave,” he said, as he stoically faced the camera.

Crew, cast behind ‘BoJack Horseman’ discuss their individual impacts on the show

Sat Sep 26 , 2020
What is this, a crossover episode? The final season of “BoJack Horseman” is a heyday of the dead – over a final meal of pills and cocaine served by waiter Zach Braff, the titular horse breaks bread with his past in “The View From Halfway Down.” The episode, directed by […] 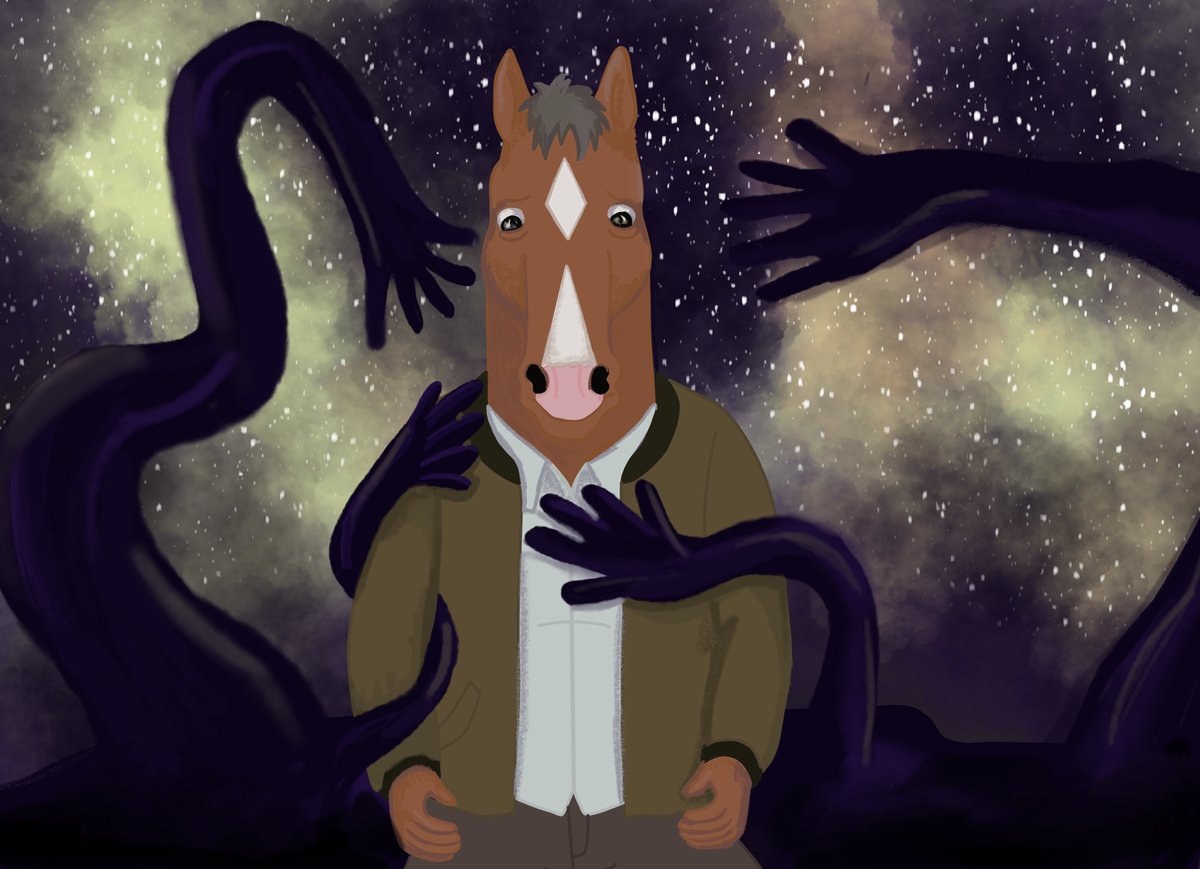