Lenovo Lenovo It has been quite a busy fall tech season with many announcements from most PC OEMs following Intel’s 11th Gen Tiger Lake processor with Xe graphics announcement. Lenovo’s products span a broad array of devices, from convertible laptops to the world’s first foldable PC and even ultra-thin gaming […]

It has been quite a busy fall tech season with many announcements from most PC OEMs following Intel’s 11th Gen Tiger Lake processor with Xe graphics announcement. Lenovo’s products span a broad array of devices, from convertible laptops to the world’s first foldable PC and even ultra-thin gaming laptops and smart hubs. These products span between serious business devices like the ThinkSmart Hub to much more casual devices like the Yoga Slim 9i with leather cover.

Lenovo already has a line of existing ThinkSmart hubs designed to make remote conferencing a dedicated function along with tighter integration and ease of use. This new ThinkSmart Hub has a 20% smaller footprint than the previous generation and has a 360-degree rotating touch screen for easy access to Microsoft Teams Rooms meeting controls. Traditionally, enterprises would use a ThinkSmart Hub in conference rooms, but nobody knows when people will be meeting in packed conference rooms for quite some time in most of the world. I believe the new ThinkSmart Hub has a renewed purpose with the newly distributed workforce that now needs to manage meetings remotely and efficiently. Having a dedicated device for meetings is a perfect way to separate personal and work while so many have become permanent work from home employees. The Lenovo expects the ThinkSmart Hub to be available this month, October 2020, starting at $1,799.

Lenovo first teased the Thinkpad X1 Fold at CES earlier this year, along with many other products, and has now finally launched it in partnership with Intel. The ThinkPad X1 Fold is the world’s first foldable PC and utilizes Intel’s Core i5 processor with Intel Hybrid Technology. Intel’s Core i5 processor with Intel Hybrid Technology codenamed Lakefield leverages two different types of cores, one big Sunny Cove processor and four smaller Tremont Cores. We detailed how Tremont Cores can lead to new and innovative form factors in our paper about the Tremont CPU architecture.

The screen on the Thinkpad X1 Fold has a 13.3” 2K OLED LG foldable screen, which leverages Lenovo’s unique hinge design to ensure that the screen does not produce a visible crease like many other foldable devices. Lenovo balanced the designed the X1 Fold to fold in half so that the weight of the X1 Fold balances evenly between the battery, CPU, and cooling. Because the X1 Fold itself doesn’t have a keyboard, it has an optional mini-keyboard that magnetically attaches to the inside of the gap of the X1 Fold when it is closed. This tight integration means that the device doesn’t get any bigger or thicker when a keyboard is attached, as commonly happens with many convertible devices. There is also an included black leather folio cover that comes with the X1 Fold that can fold out to create a support for the X1 Fold when using it open and help it stand up. Lenovo is selling the X1 Fold starting at $2,499 and will ship in November based on current order availability.

I’m impressed that Lenovo is badging this with its “Think” brand as it’s the company’s most valuable brand. It’s a risky move as Think-based products are best known for their durability and reliability yet the X1 form factor must be the most delicate. By calling think a Thinkpad, customers will expect the highest level of durability. Impressive.

I’ve used two generations of Samsung’s Galaxy Fold and I am convinced that there’s a market for smartphone foldable. I’m less certain about thicker, foldable PCs but as soon as I do an extended review, I will be more certain.

Lenovo Yoga 9i 2-in-1 and IdeaPad Slim 9i Laptop

Lenovo has always been an innovator and led in the convertible space with the Yoga line of products. However, the Yoga line has also expanded to clamshell notebooks and the new Lenovo 14” IdeaPad Slim 9i, which is not to be confused with the Yoga 9i, which is a 2-in-1 convertible. The 2.77 lb IdeaPad Slim 9i is a clamshell Notebook that leverages Intel’s latest 11th Gen Tiger Lake processors and replaces the Yoga S940 clamshell consumer flagship notebook adding more battery capacity (up to 63.5 WHr) along with Thunderbolt 4 connectivity. Not only does it come with a larger battery that Lenovo claims can deliver up to 20 hours of battery life, but it also has dual charging capability, which allows the battery to gain 4 hours of charge in only 15 minutes.

Meanwhile, the new Yoga 9i is also a 14” notebook but, as previously noted, is a convertible notebook with a 360-degree hinge and ditches the traditional touchpad for a seamlessly encased touchpad using haptic feedback for a much larger touch-sensitive area. Additionally, Lenovo utilizes a new ultrasonic fingerprint reader, which means it will work even if your fingers are slightly wet and can work through virtually any surface. The Yoga 9i also adds an optional soft-touch leather exterior to increase the luxuriousness of the company’s flagship consumer laptop. Both the Yoga 9i and IdeaPad Slim 9i offer 14” FHD or 4K resolutions, but there is also a 15” version of the Yoga 9i that has Intel’s 10th Gen processors paired with a discrete NVIDIA GTX 1650 TI and does not have leather. The 14” Yoga 9i with the metal lid starts at $1,399 and with leather at $1,699 while the 15” Yoga 9i will begin at $1,799, and all three are expected in October the IdeaPad 9i Slim is scheduled in November, starting at $1,599.

Finally, Lenovo released the Legion Slim 7i, a lightweight, 17.9 mm thick, gaming notebook powered by the latest Intel and NVIDIA chips. Lenovo configures the Legion Slim 7i up to an Intel Core-i9 10980HK with 32GB of RAM, TB of storage, and an NVIDIA RTX 2060 Max-Q GPU. The starting price of $1,329 comes with an Intel Core i5-10300H, 8GB of RAM, and an NVIDIA GTX 1650 Ti. While the thickness of this notebook does limit the performance and thermal dissipation of this gaming laptop, it does come with expandability options through the laptop’s Thunderbolt 3 ports and Lenovo’s BoostStation external eGPU enclosure, which allows for a faster discrete GPU. As far as the display goes, the base model offers a 60Hz FHD display, but there are upgrade paths to 144 Hz FHD or 4K 60 depending on the intended use case. Due to the notebook’s thin design, the memory is not user upgradeable, so make sure that you opt for the larger capacities since there are no chances to upgrade.

Lenovo has released many new PCs this fall, most of which feature the latest processor technologies from Intel, including Tiger Lake and Lakefield processors. The Lenovo X1 Fold is arguably one of the most exciting PCs I have seen in many years, and the hype around it has been building for many months since its announcement in January. With the X1 Fold being the first foldable PC, Lenovo is yet again working hard to help define new PC categories and put the latest innovations in the hands of its customers. While these products do span quite an array of PC form factors, it is fitting for a company like Lenovo, who is always creating new form factors that satisfy the ever-changing PC landscape. While not all of these PCs may be for everyone, Lenovo’s lineup has enough diversity and performance that they should have a PC for virtually every kind of consumer or business user.

Note: Moor Insights & Strategy writers and editors may have contributed to this article.

Wed Oct 7 , 2020
Income investors are always on the lookout for higher-yielding investment options. In this article we take a look at one such option – the AllianzGI Convertible & Income Fund (NCV). The fund has a number of attractive features and this is why we have recently added it to our Core […] 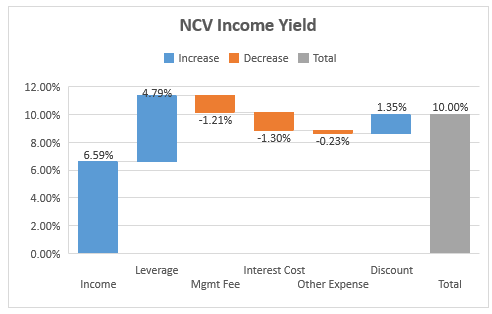