When it comes to energy policy, Latin American giants Brazil and Mexico are like “two ships of state passing in the night,” according to energy authority Daniel Yergin. Yergin discusses the issues in Latin America in his latest book, “The New Map: Energy, Climate, and the Clash of Nations” published […] 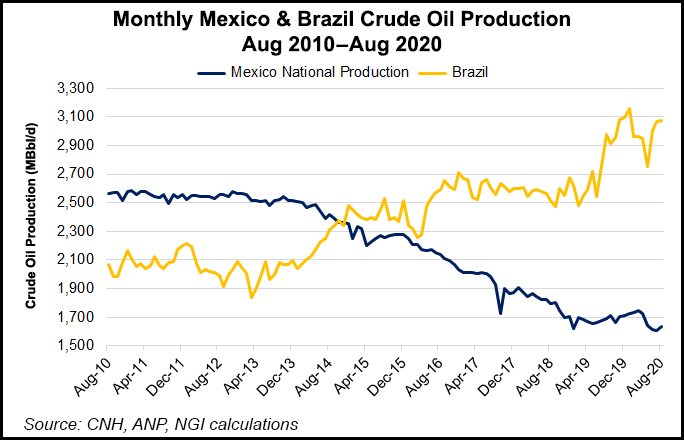 When it comes to energy policy, Latin American giants Brazil and Mexico are like “two ships of state passing in the night,” according to energy authority Daniel Yergin.

Yergin discusses the issues in Latin America in his latest book, “The New Map: Energy, Climate, and the Clash of Nations” published by Penguin Press.

According to Yergin, policies by Brazil President Jair Bolsonaro are restoring the faith of investors in the country’s energy sector, while moves by Mexico President Andrés Manuel López Obrador, who often goes by the nickname ALMO, are scaring them off.

“AMLO and Bolsonaro, coming to the presidencies of the two largest Latin American countries within a few weeks of each other, are leading their nations in opposite directions,” Yergin wrote. The two presidents assumed the top roles in their respective nations at the end of 2018.

“Mexico’s oil production has fallen back to the level of 1979, while Brazil’s is now 80% higher than Mexico’s — and growing,” Yergin said. Brazil is set to be the center of new liquefied natural gas (LNG) demand activity in Latin America at least over the next decade.

Despite the coronavirus pandemic, Brazil’s oil production in the second half could be higher than in the first six months as projects continue to ramp up, according to the Organization of the Petroleum Exporting Countries, aka OPEC.

Brazil is also undergoing a transformation that opens up the natural gas market to private sector players. In September, Brazil’s lower house approved a regulatory framework for the natural gas sector, paving the way for an opening similar to the one seen in Mexico’s gas market thanks to its energy reform of 2013.

While Brazil is embracing change, Yergin said López Obrador’s “No. 1 target” is that very reform. AMLO said recently he will respect the reforms instituted in the previous administration, but if he were unable to “rescue” state oil firm Petroleos Mexicanos (Pemex) and state utility Comision Federal de Electricidad (CFE), he would consider a push for a counter reform after next year’s midterm elections.

In an interview with NGI’s Managing Editor Carolyn Davis, Yergin said the Mexican president “has a very 1970s view about energy. That’s when his opinions were shaped. And the world’s changed a lot.”

Under the pre-reform regime, Mexico “simply could not come up with the investment required” to turn around its energy fortunes, and “unreliable and high-cost energy supplies hobbled Mexico’s drive to be competitive in the global economy…”

Yergin said the energy reform helped deliver cheap and reliable energy to Mexico. “Shale gas from the United States flowed into Mexican electric power plants, replacing higher cost LNG and oil,” Yergin said. “The foundations were now in place to drive down the cost of electricity to consumers and industry and make Mexico more competitive in the world economy.”

Even given this, Mexico is inextricably part of what Yergin called the “new map” of North American energy.

As a sign of this, natural gas flows from the United States to Mexico continue to hit monthly highs, despite the pandemic and despite López Obrador’s isolationist rhetoric.

Pipeline natural gas from the United States to Mexico averaged an estimated 6.2 Bcf/d through the end of September, up from 5.5 Bcf/d in September 2019, according to Genscape inc.

“AMLO cannot escape the reality of the shale revolution,” Yergin said, referring to the riches of oil and natural gas unleashed by U.S. technology in its Lower 48 formations that have turned the country into the world’s No. 1 exporter of oil and LNG.

There are 17 pipelines now crossing the U.S.-Mexico border, “with more to come,” Yergin said. “This means that Mexicans will continue to use U.S. natural gas to generate growing amounts of new electricity, even as AMLO seeks to return to a past when Mexico was more isolated from the global economy.”

The best holiday gifts and gadgets under $30

Fri Oct 2 , 2020
It’s an understatement to say that many people are struggling to make ends meet this yea, so it’s important to remember that great gifts are available without going into debt. We’ve rounded up some top options available for $30 or less, all of which we’ve personally tested.  Before […]