Sedgwick County Commissioner Michael O’Donnell is trying to keep voters from hearing or reading his testimony in Wichita Mayor Brandon Whipple’s defamation lawsuit until after the November election because it could be used to influence voters and damage his re-election campaign, according to a court document filed by his lawyer. […]

Sedgwick County Commissioner Michael O’Donnell is trying to keep voters from hearing or reading his testimony in Wichita Mayor Brandon Whipple’s defamation lawsuit until after the November election because it could be used to influence voters and damage his re-election campaign, according to a court document filed by his lawyer.

Whipple filed the lawsuit during the 2019 Wichita mayoral race after a video surfaced falsely accusing him of sexual harassment.

O’Donnell’s lawyer argues the timing of the deposition is politically motivated, an attempt to unseat the first-term commissioner. Whipple’s lawyer said the public’s right to know O’Donnell’s role in the smear campaign outweighs his desire to avoid potential embarrassment.

O’Donnell’s role in the video is unclear. O’Donnell’s lawyer wrote in a court filing on Wednesday that “O’Donnell had no involvement in the video campaign” and characterized the request for O’Donnell’s deposition as a “fishing expedition.”

O’Donnell has admitted to raising money to help then-Mayor Jeff Longwell’s campaign, but said he thought it would be used for a billboard campaign, not the video.

At one point the producer of the video, Matthew Colborn, told Whipple’s lawyer that O’Donnell supplied the script for the video. Colborn later changed his story, saying O’Donnell didn’t play any part in the smear campaign. In late August, he changed his story again, saying in a television interview that the commissioner gave him the script.

When Whipple’s lawyer wouldn’t agree to keep O’Donnell’s testimony secret, O’Donnell sought to reschedule his deposition until after the election saying the law allows the rescheduling to prevent “annoyance, embarrassment, oppression or undue burden or expense,” according to the court filing.

A judge will decide whether to allow O’Donnell to postpone his testimony.

The purpose of the deposition, O’Donnell’s lawyer, Mark Schoenhofer, wrote in the Wednesday court filing, is an attempt to discover information “to sway votes away from Mr. O’Donnell.”

“Mr. O’Donnell fears that his deposition testimony will find its way into the election campaign and influence the vote,” Schoenhofer wrote.

Whipple’s lawyer, former U.S. Attorney for Kansas Randy Rathbun, said he needs to depose O’Donnell as soon as possible because the discovery deadline in the lawsuit is December. O’Donnell’s testimony will likely provide new leads to chase, he said, which takes time.

“(O’Donnell) has to show that for us to go forward would be embarrassing or humiliating,” Rathbun said. “And I’m sure it will be. But that doesn’t mean his interests are greater than the interests of the public in knowing what’s going on.”

But O’Donnell’s court filing, a motion for order of protection, argues that the deadline could be extended. It also suggests that O’Donnell could challenge the election results if his testimony is made public before the election.

“Mr. O’Donnell’s answers to deposition questions will likely be reduced to a sound bite and broadcast on advertisements or at campaign rallies,” Schoenhofer wrote. “Such a use might cause Mr. O’Donnell irreparable harm in his campaign, and his only recourse would be a costly and protracted election challenge.” The motion does not provide the legal basis for such a challenge.

O’Donnell and Schoenhofer did not return calls from Eagle reporters.

O’Donnell’s request for a delay until after the election is the latest filing in a civil lawsuit that has peeled back the curtain on an unsuccessful effort to keep former Mayor Jeff Longwell in office.

O’Donnell, a Republican running against Democratic candidate Sarah Lopez in the 2nd District, initially denied involvement in the dark-money campaign.

He later admitted to raising part of the $10,000 that was ultimately used to fund it.

Colborn, Capps’ campaign manager, produced the video, which featured paid actresses in silhouette reading accusations that were originally made against Republican state lawmakers, not Whipple. It was viewed tens of thousands of times on Facebook and YouTube ahead of the election.

The effort to save Longwell’s campaign ultimately backfired. The allegations against Whipple were almost instantly proven false and the young actress said she was tricked into appearing in the ad under the pretense that it would be a public-service announcement against domestic violence.

O’Donnell has said he did not know about the message of the video or that the money would be used to fund it.

But Colborn, the only named party in the lawsuit, has told reporters and Whipple’s lawyer that O’Donnell provided him the script for the hit piece, which pulled quotes directly from a 2017 Kansas City Star and Wichita Eagle story about sexual harassment at the Kansas Capitol.

“If we have your agreement that Michael’s deposition testimony — either in whole or in part — will not be released to the media before the election, I have September 24, September 25, and October 2 that work,” Schoenhofer wrote Rathbun in an email, according to O’Donnell’s filing.

“If we cannot come to that agreement, we will have to schedule the deposition after the election,” he said.

Rathbun would not agree to the secrecy and rescheduled the deposition for Sept. 15, Schoenhofer wrote.

O’Donnell is now seeking a protective order that would allow him to wait to answer questions under oath until after the election.

O’Donnell seeks to keep testimony out of news

O’Donnell’s motion focuses heavily on keeping his sworn testimony out of the news and to keep him from getting sued by Whipple before the election.

Only Colborn and the New Mexico shell company have been named in the lawsuit, along with two John Does.

Colborn has declined to hand over his text messages and email communications with O’Donnell. He has also withheld communications with Capps, Clendenin and two other people who are not named in the filing. Rathbun filed a motion earlier this month to compel Colborn to produce those documents but the hearing was canceled Wednesday.

Colborn has produced some records of his conversations with O’Donnell.

“Defendant has produced one text message with Michael O’Donnell and a text string with James Clendenin and another individual as ordered by the Court,” Rathbun’s motion to compel states.

Those records are not public because they have not been included in court filings.

“The purpose of Michael O’Donnell’s deposition is to cause further damage [to] his reputation before the November election,” Schoenhofer wrote. “If Plaintiff (Whipple) moves this Court to amend his petition to add Mr. O’Donnell as a party, media coverage of the motion and its contents is certain.

“Plaintiff (Whipple) will undoubtedly add portions of Mr. O’Donnell’s deposition to the motion, which will then be accessible to every news outlet.”

O’Donnell’s lawyer argues in his motion for a protective order that his testimony should be shielded until after the election because he believes that Whipple’s lawsuit is a politically-motivated attempt to “unseat Michael.”

Whipple said O’Donnell’s testimony is crucial to his lawsuit because of Colborn’s changing story and lack of cooperation.

“I’m not sure what to believe from Colborn at this point because he just keeps changing his story. That’s why it’s important to get all the evidence,” Whipple said.

Whipple said O’Donnell’s testimony could go a long way in finding out who else was involved.

“This is about transparency,” Whipple said. “This is the kind of political hit job that people usually get away with, but it’s time to pull those people out of the shadows and expose what went on here. We can’t have this in our local elections. We can’t have shell companies and dark money and false accusations and laundering money through a charity.”

Shot At Home: Behind The Scenes Of How The Gone Game Was Made

Fri Sep 25 , 2020
Rukhsar Rehman, who plays Suneeta Gujral during a shot At the peak of India’s Covid-19 lockdown in March, the team at Bodhi Tree Multimedia, a Mumbai-based production house, began brainstorming. All conventional shoots had halted. For their next project, the story had to be relevant—but also practical to get off the […] 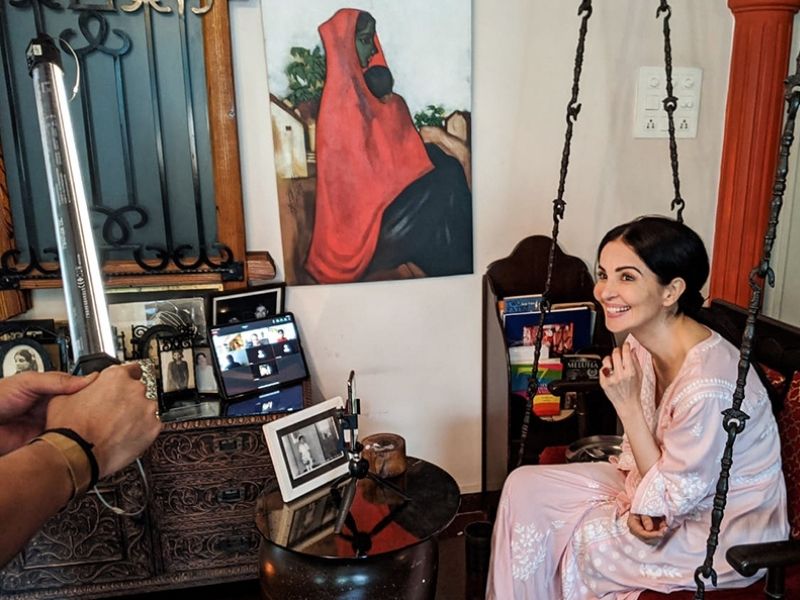