The Columbia Missourian, including Vox Magazine, won a record 79 awards Thursday in the Missouri Press Association’s 2020 Better Newspaper Contest, including the gold cup award given to the news organization with the most awards in its division. The Missourian swept eight categories, including Best Photo Illustration, Best Photo Package, […]

The Columbia Missourian, including Vox Magazine, won a record 79 awards Thursday in the Missouri Press Association’s 2020 Better Newspaper Contest, including the gold cup award given to the news organization with the most awards in its division.

The Missourian competed in the division of newspapers with circulations from 5,001 to 15,000 and won awards for written stories, photos, ongoing coverage, multimedia, graphics, design and projects published in 2019.

The awards were announced Thursday during the Missouri Press Association’s annual business meeting, which was held virtually this year.

General Excellence: The Missourian won first place for breadth of coverage, quality of layout and design, the use of photographs, artwork and advertising design and layout over three issues, which included a special MU Homecoming section.

Best Coverage of Government: Kyra Haas and Aviva Okeson-Haberman won a first-place award for their story about inefficiencies in Missouri’s elder abuse hotline. This joint investigation by KBIA and the Columbia Missourian revealed less than half of the 92,000 calls made to the hotline were answered in 2018. Missouri Attorney General Eric Schmitt launched an investigation into the hotline and said he learned of the gravity of this issue from the Missourian and KBIA’s reporting.

Best Feature Story: Morgan Keith and Janice Zhou won first place for their story about the tragic death of a child by a Burlington Northern Santa Fe Railway train in Marceline. Keith and Zhou also earned an honorable mention for this story in the Best News Story category. Karina Zaiets won second place for her story about a Columbia pathologist, Adam Clapper, and how he helped take down multi-billion dollar company, Theranos, based on faulty scientific claims. Steve Garrison received an honorable mention for his story about flood control measures and how they have pushed endangered species to the brink.

Best News or Feature Series: Alexis Allison won a first place award for her series on food insecurity across the state and how grassroots partnerships are working to provide stability for people without regular access to nutritious food.

Best News Photograph: Claire Hassler won first place for her photograph of Shaunda Hamilton speaking to a crowd about standing together against gun violence at a vigil for her daughter Nadria Wright. Yanran Huang received an honorable mention for her photo of Starlita Benson during the MU Remembers wreath-laying ceremony.

Best Feature Photograph: Emmalee Reed won first place for her photograph of MU student Ben Schnelle and royalty candidate Catherine Hoffman celebrating the results for Homecoming King and Queen at halftime at the Missouri game against Ole Miss. Madison Parry won a second-place award for her feature photo of Mike Szydlowski, science coordinator for Columbia Public Schools, showing a duckling to co-worker Jenny Weston. Joel Chan won third place for his photograph of a toddler at a sensory-friendly Touch-a-Truck event.

Best Sports Photograph: Tristen Rouse earned a first-place award for his photograph of Helias defensive back Griffin Buschjost intercepting a pass intended for Rock Bridge in a game at Helias Catholic High School in Jefferson City.

Best Photo Package: Missourian visual journalists earned a first-place award for their Aug. 30 edition of Friday Night Sights, a compilation of visuals of high school football. Julia Hansen earned a second-place award for her visuals package about migrant workers in Missouri’s Bootheel, who faced employer intimidation and worked in dangerous conditions. Lia Waldrum won third place for her photo story about a music therapy school in mid-Missouri that serves a wide range of children, including some who are severely disabled. Missourian staff also won a third place award for Best Page Design for the print edition of this story based on content, photography, layout and design. Antranik Tavitian received an honorable mention for his package on windmill turbines in central and northwest Missouri.

Best Investigative Reporting: Sky Chadde won first place for his story about migrant workers in Missouri’s Bootheel, who faced abuses, threats and a lack of payment for their work. Yue Yu won second place for her story about Columbia developer Jeffrey Smith who bypassed state campaign contribution limits by funneling nearly $1 million through shell PACs. Sky Chadde and Yue Yu teamed up to win an honorable mention award for their story about lobbying groups trying to make it harder to sue businesses.

Best Story About Rural Life or Agriculture: Tom Coulter won first place for his story about a new CAFO law that divides farmers and health departments over the future of agriculture and the environment in Missouri. Rachel Behrndt (text) and Jacob Moscovitch (visuals) won a third place award for their story about an innovative effort to support artisanal agriculture in central Missouri.

Best Story about Religion: Nick Kelly won a first-place award for his profile of Missouri defensive tackle, Kobie Whiteside, and the importance of his faith. Jacob Moscovitch earned a second-place finish for his profile on conversion therapy survivor Amanda Louck. Lauren Polanski earned a third-place finish for her story about a new program training prisoners to become pastors in Missouri prisons. Olivia Garrett received an honorable mention for her story about Tolton Catholic’s namesake and his path to sainthood.

Best Page Design: This first place staff award featured the Rock Bridge boys basketball team winning the state championship for the first time in school history. Staff won second place for the layout, design of text and photos of the Pictures of the Year 2019 competition.

Best Online Newspaper or Website: Judging based on originality, ease of use, local content and advertising earned a first-place award for ColumbiaMissourian.com staffers.

Best Overall Design: Missourian staff earned a second-place award based on a three-issue submission. Judging criteria looks for consistent quality of the entire newspaper and includes all design elements, such as photography and graphics.

Best Breaking News Story: Galen Bacharier won a second-place award for his story about MU’s decision to raze Pickard Hall, the third oldest building on campus, because of an inability to eliminate radioactive contamination. Bennett Durando received a third-place award for his story about Missouri football being banned from 2019-20 postseason play as a result of the NCAA’s academic fraud investigation.

Community Service: Missourian staff won second place for their 2019 edition of the Progress Awards, a program that honors unsung heroes in our community. Categories represented include progress in the arts, civic engagement, social justice and corporate citizenship. Missourian staff received an honorable mention for organizing and hosting the 2019 Missourian Regional Spelling Bee.

Best Story about the Outdoors: Molly Hart (text) and Claire Hassler (visuals) won second place for their story about the battle over a rail-to-trail project, the Rock Island Corridor, that will impact landowners in a potentially negative way.

Best Story About History: Kate Robbins won a second-place award for her Vox Magazine story about a 1991 mass shooting in her home town of California, Missouri.

Best Editorial Cartoon: John Darkow received an honorable mention for his commentary on current events and issues, including politics, immigration and sports.

Higher tax proposed to support ‘homes for all’ in Kalamazoo County

Fri Sep 25 , 2020
KALAMAZOO, MI — A tax proposal is back on the ballot for Kalamazoo County voters in 2020 to continue and expand support for rent subsidies and affordable housing first passed by voters in 2015. The new millage purposes a 0.75-mill property tax for eight years, 2021 through 2028, to provide […] 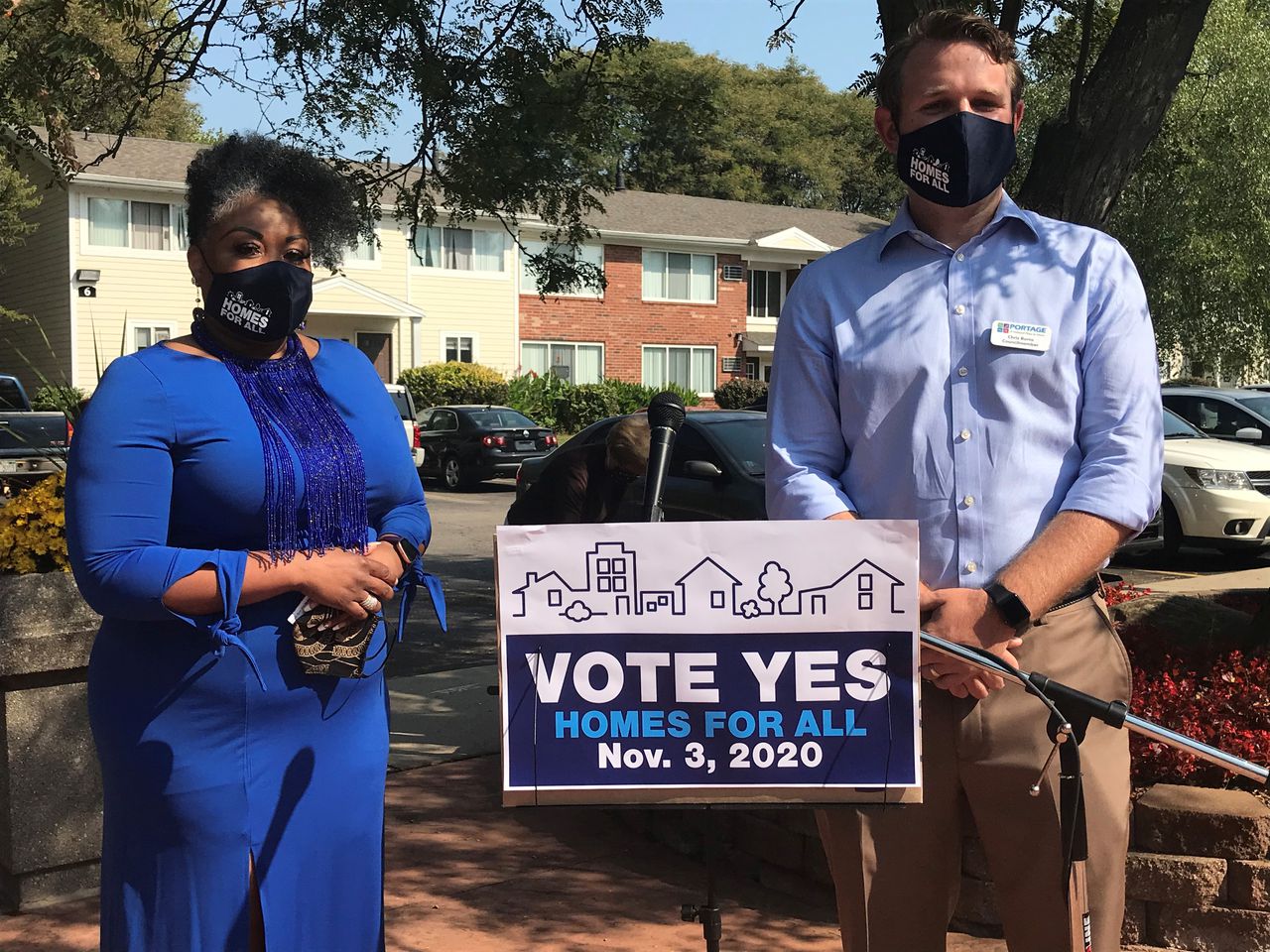