In a deliberate move to make it easier and more comfortable for astronauts to do their business beyond Earth, NASA created and will soon send a new-and-improved toilet to space.  The new space toilet—deemed the Universal Waste Management System, or UWMS—will fly to the International Space Station on Northrop Grumman’s […]

In a deliberate move to make it easier and more comfortable for astronauts to do their business beyond Earth, NASA created and will soon send a new-and-improved toilet to space.

The new space toilet—deemed the Universal Waste Management System, or UWMS—will fly to the International Space Station on Northrop Grumman’s 14th contract resupply mission, set to launch Tuesday. Another will be installed aboard the Orion spacecraft for the Artemis II flight test, anticipated to deliver astronauts further into the solar system than NASA says anyone has gone before.

“You don’t realize how much you take a toilet for granted on Earth where we have them readily available, until you’re limited to only two on the [International Space Station] and one of them breaks,” NASA astronaut Andrew Morgan said during a virtual press briefing jointly held by the National Science Foundation and ISS Friday. “You know, that really gets your attention and so having a functioning toilet on the ISS is extremely important.”

Morgan, who recently served as flight engineer on the ISS, administered hundreds of experiments in space and weighed in on the toilet’s development, was also joined by NASA astronaut Jessica Meir, another recent flight engineer on the space station, who also conducted a range of research and the first three all-female spacewalks. Other agency and academic experts exploring science and space also participated in the event.

Through its ambitious Artemis missions, NASA aims to build a sustainable presence on the moon—and eventually send humans to Mars and beyond. Morgan noted that “one of the big drivers” of the new toilet’s production is that “we are going to start to have more and more astronauts living at one time” on board the International Space Station.

“But this also demonstrates a lot of new technologies, including 3D-printed titanium parts,” he explained.

The existing space toilet, according to Morgan, is generally reliable and integrates Russian hardware built through decades of experience with American hardware “that processes urine and turns it back into drinking water.” Currently, astronauts on the space station recycle about 90% of all water-based liquids, which includes urine and sweat, NASA confirmed. The estimated duration of roundtrip missions to Mars is about two years—and opportunities to top off water supply will not be available amid those pursuits. So, America’s space agency aims to achieve about 98% recycling rates ahead of the first human missions to the red planet.

Compared to the build of the present space station toilet, the UWMS is about 65% smaller and 40% lighter. The system will also be better integrated with other components of the station’s water system, which NASA’s release notes will assist in recycling more urine for the astronauts to drink. In the agency’s announcement, Meir playfully notes, “when it comes to our urine on ISS, today’s coffee is tomorrow’s coffee!”

Though fecal waste is not presently processed for water recovery, NASA confirmed its investigating that potential capability, as well.

But what makes the UWMS universal is that it encompasses a design concept that can easily integrate into different spacecraft and systems. NASA’s release notes that without gravity, space toilets have to harness air flow to pull waste from astronauts’ bodies and into appropriate receptacles. The new-and-improved toilet will incorporate a feature that automatically initiates airflow as soon as its lid is lifted, which the agency said it believes will also lessen odors. The nascent design is also more ergonomic and requires less maintenance.

NASA considered a great deal of insights from astronauts to inform the development of the space toilet.

“A big part of the project is talking very frankly about human biological processes,” Melissa McKinley, a NASA official in Advanced Exploration Systems that led the project to design and build a new space toilet, said on a Reddit “Ask Me Anything” forum the agency recently hosted.

Morgan also further emphasized that the agency garnered a lot of feedback and aimed to make it user-friendly. Having tried the new system out for himself, he said, “I can tell you, it has a lot of really neat, simplistic design aspects to it to make it resistant to failure—or easy to replace when it does.”

The new toilet’s makers incorporated foot restraints and handholds that astronauts can cling onto so that they do not float away as they’re trying to go, as the agency also added that astronauts consistently “indicated that the traditional thigh straps were a hassle.” A special funnel and hose are used for urine, while the seat is used for bowel movements. NASA said the new space toilet might appear to be uncomfortable and pointy, “but in microgravity it’s ideal.”

Further, the agency intentionally included components that make it more comfortable for women to go to the loo.

“When the existing toilet was made and designed, it was quite a while ago. So I think there were fewer females if any back then when it was designed. Sometimes some of the anatomical differences may or may not have been taken into account,” NASA astronaut Meir noted during the press event. “So this new toilet better accounts for those anatomical differences, making it much easier to use for everybody up there.”

On top of the toilet, the resupply spacecraft will also be bringing what NASA said was “thousands of pounds of scientific investigations, technology demonstrations, commercial products, and other cargo,” including a new crop to grow in space, a 360-degree camera to capture spacewalks for virtual reality—and an Estee Lauder-made night serum, which will be photographed in the space station’s window for commercial purposes.

Tue Sep 29 , 2020
One group of young people in St. John’s is getting the chance to make custom-designed skateboards and hone the skills they need to make a living as an artist, all while giving back to a cause they care about. The NL Boards program is back for its second year, with […] 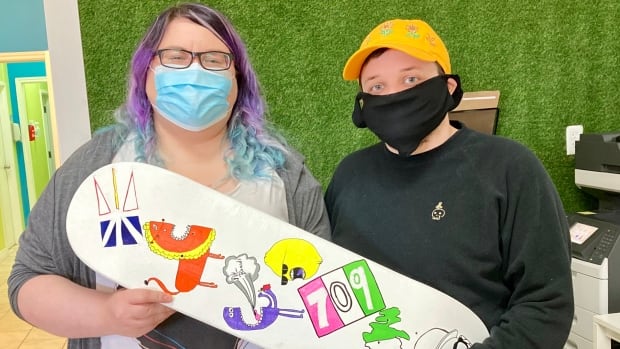