A beekeeper from Ireland built a fully functioning hive using only Lego that now houses 30,000 bees.

The claim: The National Park Service gives bees watermelons in the winter

Does the National Park Service use watermelons to give bees a sugar-boost before the winter?

A photo in an August post on Facebook that has been shared 47,000 times reads: “Before winter, the National Parks Service will offer dozens of watermelons to local bee colonies to help give them one last super-mega glucose burst to before winter finally sets in. The bees clearly appreciate this.”

The image shows hundreds of bees sitting on watermelon halves lying in the grass.

The USA TODAY Network reached out to the author of the August post but has not received a reply.

The photo also appears in a separate Facebook post from September 2019. It claims feeding “watermelon if conditions are tough is a good idea because it’s got plenty of fructose and moisture!”

The information and photo is credited to an NPS employee. NPS spokesperson Cynthia Hernandez told USA TODAY by email that the employee shared the image to a personal Facebook page after seeing it online and was mistakenly credited with the information and image.

Imagine if we all did this! Bees are so integral to our ecosystem as the hard-working pollinators that they are. They deserve every chance at survival that we can give them.

National Park Service said it does not offer watermelons

“In fact, the National Park Service primarily focuses on protecting the landscapes and ecosystems that bees use for foraging while away from their colonies, rather than providing artificial sources of nectar or food,” said Hernandez.

Setting watermelons and other fruit out could create problems, she added.

“Leaving a large amount of fruit in parks could attract animals other than the intended bee colonies to areas they may not usually frequent, as well as spread nonnative seeds,” Hernandez said. 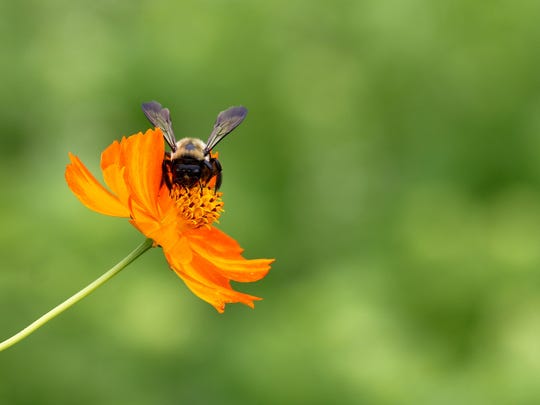 It was a hot, humid morning at the Hugh Cargill Community Garden in Concord, Tuesday, Aug. 4, 2020, but the gardeners were out. The bees were out as well, with this one spending time on a Cosmos flower. (Photo: Wicked Local Staff Photo/Ann Ringwood)

Should you feed bees watermelon?

Mary Reed, the chief apiary inspector for the Texas Apiary Inspection Service, said giving watermelon to bees isn’t something she’d recommend, as it could lead to the spread of disease among the bees.

“Beekeepers will take their hives to watermelon fields for pollination, but they’re just going to the flowers,” Reed said. “I’ve never heard of someone cracking open a watermelon and just placing it out there for their bees to feed on.”

There are certain times of the year where there may not be strong nectar resources for bees, she said. It’s common that beekeepers will feed their hives sugar water.

“Here in Texas, it’s pretty interesting — over the summer in some areas, you tend to have to feed bees just because it’s so dry and there’s not a lot of nectar resources,” Reed said.

Sometimes the sugar water is fed to bees through an in-hive feeder. Another method of feeding bees is called open feeding, where beekeepers set out buckets of sugar water. The latter method can be problematic as it can allow for the spread of diseases.

The watermelon method depicted in the photo would be considered a form of open feeding, she said.

Reed said she hopes people don’t see this image and try setting out watermelons to help bees. In addition to spreading disease among the bees, it could also be a public safety concern if a large volume of bees are being attracted.

Instead she recommended people who aren’t beekeepers but want to help bees buy local honey and plant pollinator-friendly plants.

What does the National Park Service do to help bees?

While the National Park Service does not set out watermelons for bees (instead emphasizing not feeding animals at national parks), the agency does work to help pollinators of all sorts, including bees.

“We have really been actively engaged with protecting and supporting and trying to enhance habitat for pollinators in a variety of our park units — from small units to some of the larger national parks,” said Lori Makarick of the National Park Service.

Makarick is the branch chief of landscape restoration and adaptation in the Biological Resources Division of the NPS Natural Resources Stewardship and Science Directorate.

The agency’s work to help pollinators, such as bees, “spans the gambit,” Makarick said.

“In some areas, park units are restoring habitat and trying to bring back overall biodiversity to support a larger number of species,” she said. “And in other parts, it could be something as simple as a small pollinator garden that’s part of a courtyard of a federal facility.”

The agency also does education and outreach on the importance of pollinators and their role in the ecosystem.

Based on our research, the claim that the National Park Service gives bees watermelon is FALSE. The National Parks Service says this is not something they do. An apiary expert says leaving watermelons out for bees is not common practice for beekeepers.

Thank you for supporting our journalism. You can subscribe to our print edition, ad-free app or electronic newspaper replica here.

Our fact check work is supported in part by a grant from Facebook.

Thu Sep 24 , 2020
Walmart is expanding its drone delivery tests with the announcement of a pilot project involving Quest Diagnostics. The company, which is best known for allowing consumers to order their own blood tests, will work with Walmart to deliver at-home COVID-19 tests to consumers, enabling them to test themselves in the […]