ODOT is investing $25,500,000 to reconstruct and widen close to 1 mi. of I-76 between Akron and Barberton in Summit County. (The Ruhlin Company photo) The Ohio Department of Transportation (ODOT), over the years, has been addressing its infrastructure deficit to replace aging roads and bridges and to upgrade crucial […] 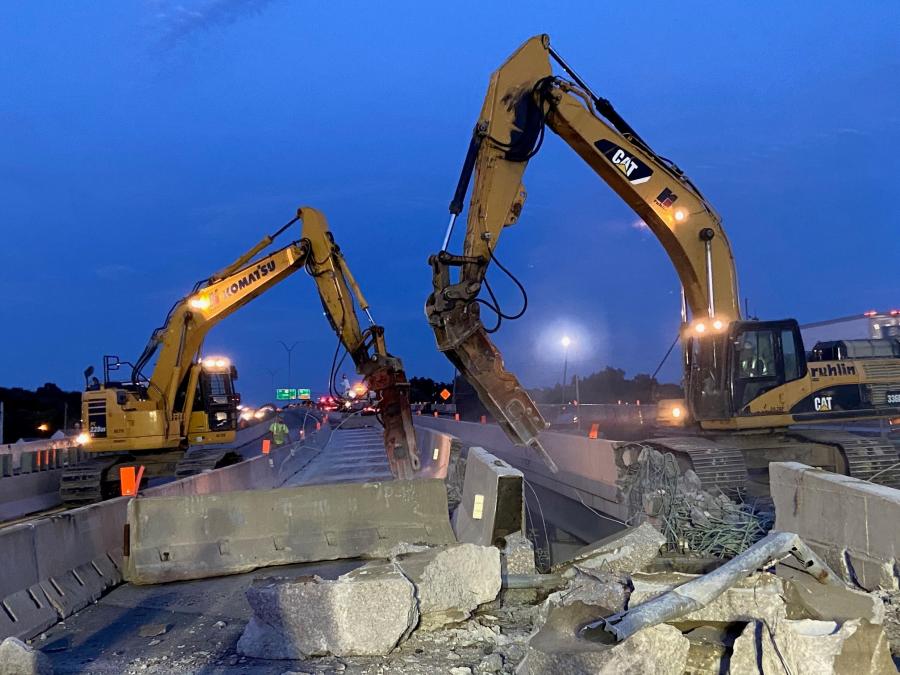 ODOT is investing $25,500,000 to reconstruct and widen close to 1 mi. of I-76 between Akron and Barberton in Summit County.
(The Ruhlin Company photo)

The Ohio Department of Transportation (ODOT), over the years, has been addressing its infrastructure deficit to replace aging roads and bridges and to upgrade crucial hubs in many of the state’s major cities, and Akron is part of this action.

ODOT is investing $25,500,000 to reconstruct and widen close to 1 mi. of I-76 between Central Avenue and the Kenmore Leg in the cities of Akron and Barberton (Summit County). The project, which was awarded to The Ruhlin Company, also includes: the reconstruction and reconfiguration of the East Avenue/Wooster Road/State Street interchange; removing the bridge over Central Avenue; replacing of I-76 bridge over Wooster Road; resurfacing State Route 619 from I-76 to E. Hiram Street, and from Harding Avenue to E. Park Avenue; and minor bridge repairs on I-76/Kenmore Leg. 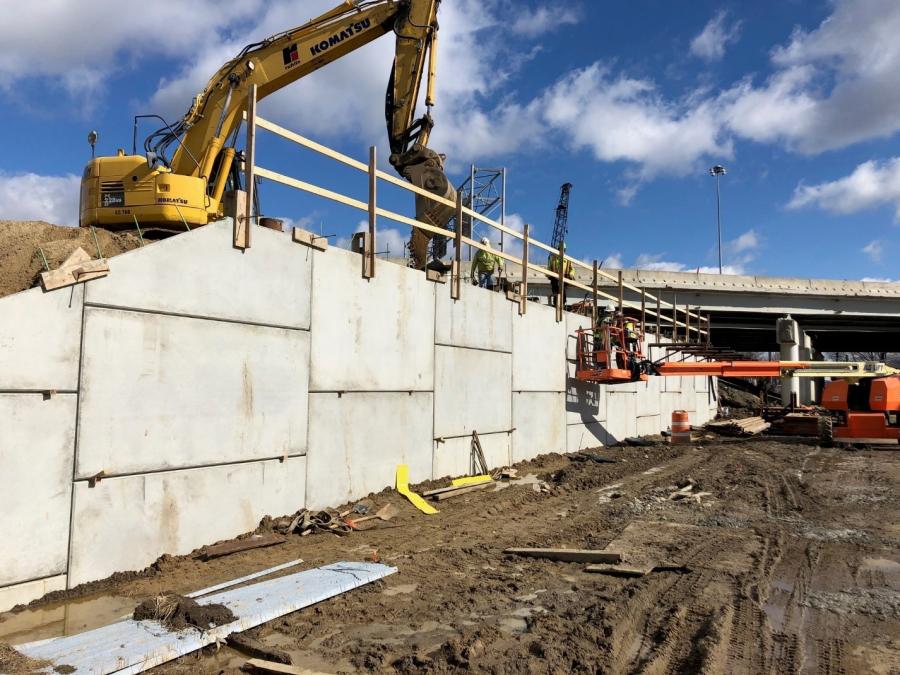 This portion of I-76, built several decades ago, is currently two lanes in each direction separated by a concrete barrier. Ruhlin is adding a through lane in each direction. The interchange and bridges also were constructed in the same time frame

The work is funded by the ODOT Major Rehabilitation Program, as well as District Preservation and local funds. This project started in the summer of 2019 and should be completed in July 2022.

“This portion of I-76 will be able to accommodate the future traffic counts with the addition of one more lane in each direction,” said Ray Marsch, public information officer, ODOT District 4. “By having this new full interchange, it helps increase the safety of this area. Traffic will now be able to get on and off at State Street from I-76.”

Prior to construction, this hub handled 66,000 car and trucks daily and the new hub will be able to accommodate future traffic volumes with the addition of the lanes.

The traffic management plan is based on temporary lane closures and detours.

“Traffic has been adjusting well to the construction,” said Marsch. “We always remind motorists to slow down while in our construction zones.”

The project is divided into three construction phases: Phase 1 covered mid-summer 2019 to mid-July 2020; Phase 2 – mid-July to late November 2020; and Phase 3, which includes winter work, should be completed in 2022. 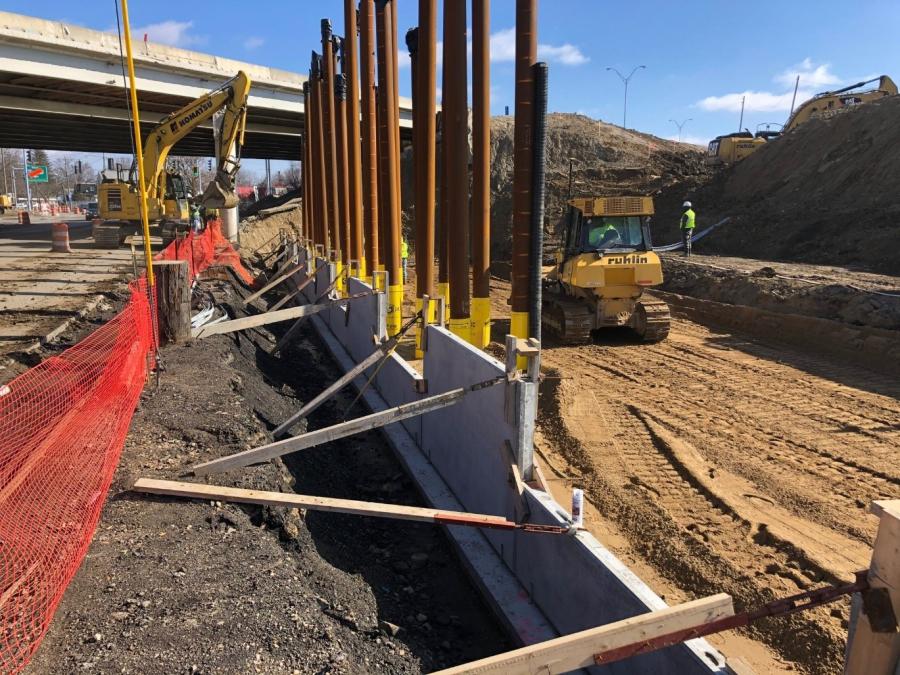 “The main elements of Phase 1 were the reconstruction and widening of the entire eastbound side of the highway; realignment of the on and off ramps from State Street and Wooster Road; and the demolition and reconstruction of two lanes of the Wooster bridge,” said Jim Ruhlin Jr., Ruhlin’s project manager. “Phase 2 covers the removal, replacement and widening of the westbound lanes, the installation of the concrete center median barrier, and for the second portion of the bridge, pile driving, MSE walls and the removal and reconstruction of two lanes.”

The asphalt highway section is less than 1 mi. in length and is being widened from two to three lanes in each direction. The on and off ramps are concrete.

Winter work, part of Phase 3, will focus on bridge and pavement demolition and pile driving. Most of the operations are conducted during the day, limiting late shifts to temporary preparations to switch traffic. Concrete barriers separate the crews from traffic.

“The overall challenge for the first phase was a box culvert extension over an existing large ditch, referred to by ODOT as a Mud Run, in a low-lying area,” said Ruhlin. “We had to come up with some unique coffer dams and some culverts to control the water. We did a lot of pumping to be able to extend the box culvert for the footers for the bridge. For Phase 2, the challenges are primarily access. When you’re working in the middle of the highway, sandwiched by traffic on either side, you have to plan your work from a logistics standpoint so that you’re able to get materials, equipment and crews to the work area and not causing yourself problems.”

Each phase creates a large work zone. Crews also are engaged in some minor bridge repairs on I-76/Kenmore Leg.

“Our relationship with ODOT is very good,” said Ruhlin. “It’s a very tenured group that we’re working with and they like to handle issues quickly and on the job.”

The Phase 1 road work was based on shifting traffic; removing the old pavement and excavating the area for the new lane; and constructing the new lanes.

“There was fill that needed to be built for the new ramp alignment,” said Ruhlin. “Once the pavement was removed, we built the fill in conjunction with the demolition of the old bridge and extending of the box culverts. Then we were able to finish the construction of the bridge. The road excavation went as planned. We haven’t done any crushing on-site, however we have used a lot of the demolished concrete debris as fill, so that remained on-site and the rebar and the full steel beams from the bridge were sent to a scrap yard for recycling.” 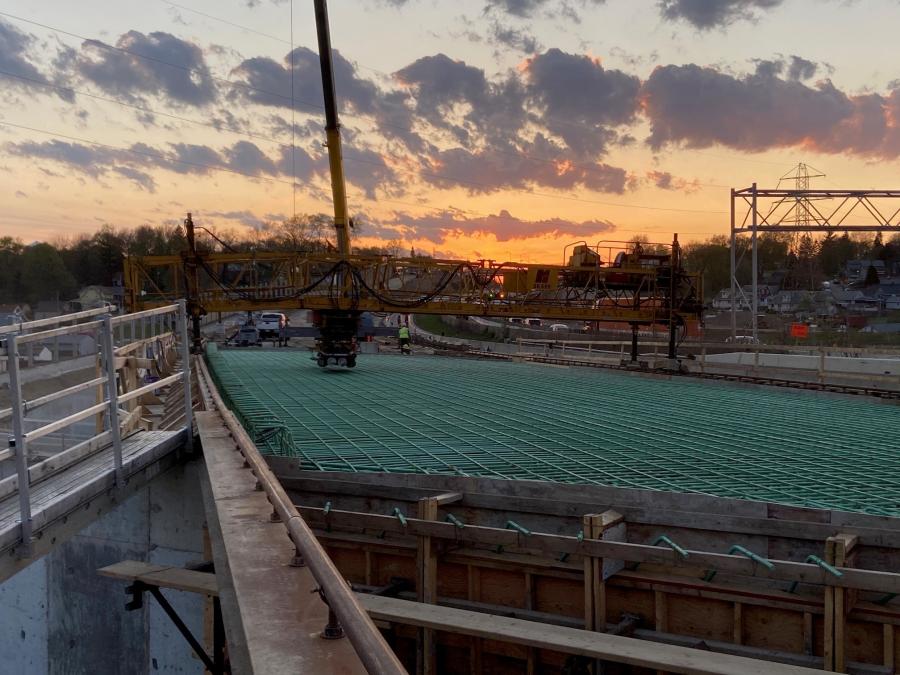 The old I-76 bridge over Wooster Road bridge is roughly 140 ft. long and has two lanes in each direction. It carries traffic between Barberton and Akron.

As noted, a new portion of the bridge is being constructed in each phase, with traffic switches to match the work.

“We hammered the deck while the road below was closed, and then removed the debris from the road,” said Ruhlin. “We then cut the beams out. We had Cat 336 excavators with MTK hammers and we had Volvo 120 loaders below.”

The majority of the demolition work is being conducted between Friday night and Saturday morning to minimize traffic impacts.

The bridge reconstruction started with Phase 1 pile driving — 48 piles were driven to depths between 65 and 90 ft., followed by the installation of MSE walls.

“Work on the abutments occurred simultaneously so that when both were ready, we could set the bridge steel and pour the deck,” said Ruhlin. “The pilings overdrove a little bit, which usually means you have soft soils. However, pile overdriving is not out of the ordinary.”

The center median wall is a 57-in. single slop concrete barrier. A GOMACO Commander 3 paver will be used to slip the concrete for the barrier. The new lanes are based on a 6-in. 304 subbase; 10-in. asphalt concrete base; and a 3.25-in. asphalt top.

Ruhlin is satisfied with the progress thus far.

“So far, so good,” he said. “We’re on schedule and on-track to finish Phase 2 by mid- to late November.”

“It’s a very dynamic team and we have a good group of guys that communicates well,” said Ruhlin, “so they always know what is going on at any given moment. We have good crews that have meshed well over the years and they have put forth a great effort to complete a solid quantity of work in a short period of time.” 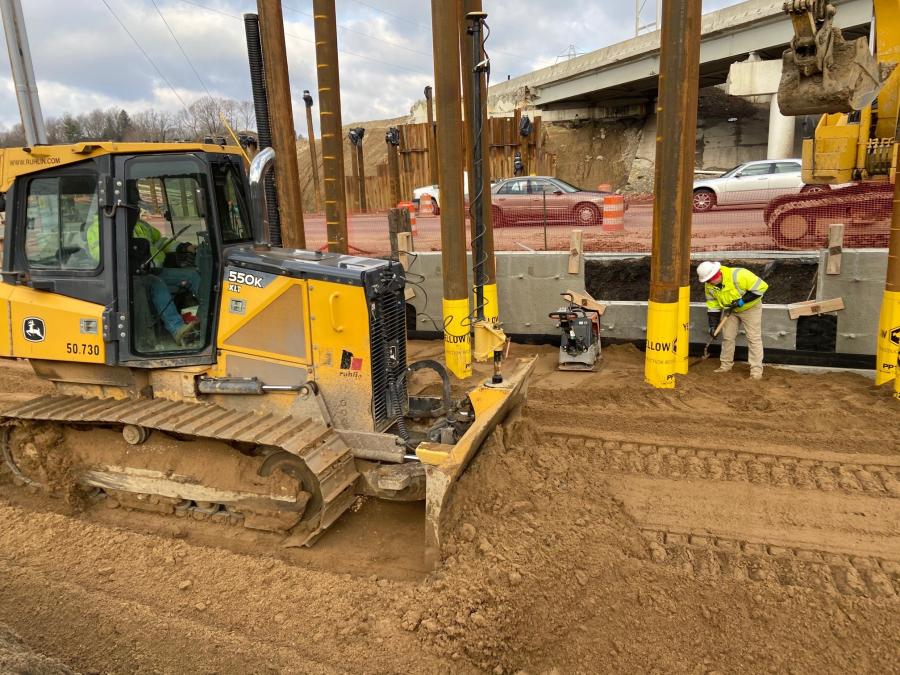 “A large part of our success comes from how well they all work together,” he said. “They are very skilled and we are lucky to have great crews. Having good equipment to complete a job is important, but the staff is what makes it a success.”

Peak days have had 35 Ruhlin and subcontractor employees on-site. The main subcontractors are Shelly and Sands for paving; Cardinal Electric for electric; KLE for rebar; A & A Safety for maintenance of traffic; and MP Dorey for highway signage.

“Wear and tear issues are pretty typical/routine stuff — undercarriages are going to wear out, cutting edges on blades and teeth on buckets,” said Ruhlin. “This job is very close in proximity to our main office and shop — roughly 15 minutes — so any breakdowns or maintenance items can be handled very quickly. The keys to minimizing breakdowns are just staying on top the routine maintenance. Don’t push things off to the side and let a minor problem become a major problem, which could cause you major down time in the future.”

“We do our own in-house maintenance and we have a heavy equipment shop, several mechanics, a shop foreman and equipment manager,” said Ruhlin. “We communicate with the various vendors on parts and support that we may need and then our guys execute the repairs. Ohio Cat and Columbus Equipment are tops when it comes to parts inventory.”

Wed Oct 14 , 2020
CBSE question papers of previous years’ board exams are very helpful to analyse the pattern of the exam and know important topics and questions which must be prepared for the upcoming board exam. We are providing here the CBSE Class 10 Information Technology Question Paper of Board Exam 2020. Students […] 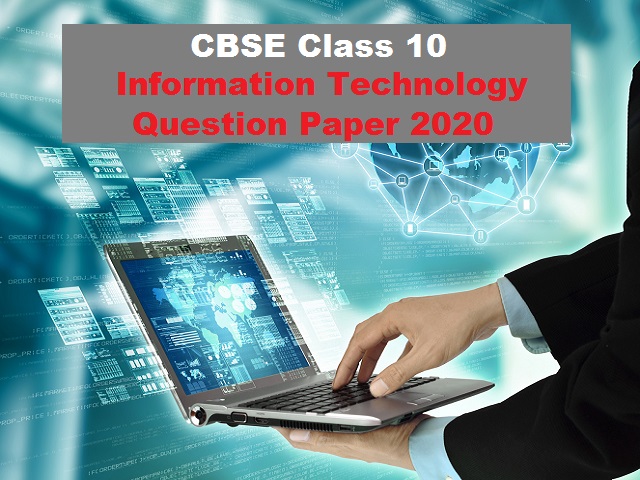