Pixar’s latest entertainment continues the studio’s successful quest for emotional domination of the animation space. Having mined your heart in “Up” and penetrated your brain with “Inside Out,” now they reach right into your “Soul.” “Soul” is perhaps the most existentially ambitious film ever attempted by Disney and yet it […]

Pixar’s latest entertainment continues the studio’s successful quest for emotional domination of the animation space. Having mined your heart in “Up” and penetrated your brain with “Inside Out,” now they reach right into your “Soul.”

“Soul” is perhaps the most existentially ambitious film ever attempted by Disney and yet it pops with colorful visuals and gentle wisdom while the story clips along despite the dizzying height of the concept. Only in the final stages do the knots of plot complexity get the better of the characters, but audiences will have been well won over by then.

The film premiered to a reduced, socially-distanced audience on the big screen at the BFI London Film Festival on Sunday but it will, of course, make a larger, more controversial, non-theatrical bow on Disney+ on Christmas Day, where it is sure to prove a destination watch for many families around the world over the holiday period. They are unlikely to be disappointed, although some of the gorgeous splendor of the computer-generated animation is bound to be lost on smaller screens.

Joe Gardener (voiced by Jamie Foxx) is a middle school band teacher in Queens, New York. The dissonant strains of his class attempting “When You Wish Upon A Star” cleverly play over the traditional Disney opening logo, leading Joe to demonstrate to the listless students his own piano skills, which reveal that he still nurses dreams of making it in jazz rather than in the classroom.

The day he is offered a full-time teaching post, with a pension plan and security, he also gets a call from a former student, a successful drummer called Curley (the voice belongs, almost inevitably, to Amir “Questlove” Thompson). Curley is offering the man he still calls “Mr. Gardener” the chance to sit in with famed saxophonist Dorothea Williams at the Half Note in the City that very night.

Ignoring his mother’s pleas to take the teaching job and give up the jazz dream, Joe hurries over to the club to audition. He gets the gig after impressing Williams (Angela Bassett), who calls him “Teach” and tells him to get a new suit. Excitedly rushing home through the New York streets, Joe has a series of amusing near-misses until a sudden drop down a manhole throws him, and the movie, into another dimension.

Now re-drawn as a “soul,” Joe is on a conveyor belt — shades of Powell and Pressberger’s “A Matter of Life and Death” — to the Great Beyond. However, one more deep plunge takes him into another realm, where a wraith of a woman with a clipboard (Alice Braga) explains he’s now in The Great Before, where baby “new souls,” drawn as cute blue-ish bubbles with faces, are assigned personality traits before they are sent to Earth.

Like I said, it’s complicated, the sort of movie that must have been hellish to pitch. Director Pete Docter’s previous form with “Inside Out” certainly will have inspired the giant leaps of faith required (and the fact that he has eight Oscar nominations and two wins and is the chief creative officer of Pixar no doubt helped, too).

To earn his ticket back home, Joe is assigned a mentoring role, put in charge of a reluctant soul who doesn’t want to be sent to Earth. She’s called 22, played by Tina Fey with a full range of one-liners and cute backchat that has previously defeated the patience of a long line of mentors from Mother Theresa to Carl Jung and Gandhi.

Philosophically and thematically complex as it might sound, the clarity of animation styles and the razor-sharp expository dialogue makes it all seem perfectly reasonable. This is a cartoon for children of all ages, looking at how human personality is formed and how choices, dreams and creative spark impact our lives. There’s a lot to take in, but it doesn’t feel overstuffed with ideas. Not yet.

Joe and 22 do return to New York, and the film then takes on a comic, body-swap element involving the wrong soul in the wrong body. Joe has come back as a cat, and I don’t mean of the jazz hepcat variety.

It’s a change of tack and tone. There ensues a race against time for Joe to get his body back, repair his suit, fool his Mom, inspire a trombone student and make it to the gig, all while 22 (now contained in Joe’s body — stay with me on this) learns what it is to live in the big city, to wear shoes, take the subway, to taste pizza and get a haircut for the first time.

I haven’t even mentioned a surprisingly large part for British chat show host Graham Norton voicing a twinkly, spiritual leprechaun-type figure called Moonwind who sails a galleon on the Astral Plane rescuing moody, dark-grey lumps he refers to as “lost souls.” He exists, too, in New York, as a sign-twirler who can help 22 return to the Great Before.

If we’re brutally honest, this element is a stretch for both the film’s narrative twists and for Norton’s vocal talents. (Of course, in many territories, the character of Moonwind will be voiced by someone else, so this may not be a huge concern, but it will clang, in English-speaking nations, as slightly odd voice casting.)

“Soul” aims admirably high, yet ultimately can’t quite fulfill the scale of its ambitions. There are a few loose ends, not least the character of Lisa who gets mentioned as some suggestion of a thwarted love interest for Joe, yet about whom we hear no more as the story heads toward a climax I couldn’t quite fathom in terms of the “great Pixar lesson.”

Is it about living your dreams? Or about life being more than that? Or less than that? About finding a true purpose, or just getting approval from your mom and enjoying a pizza and the falling leaves?

There is so much to enjoy and ponder in “Soul,” not least the predominance of African American characters and some fine music, with contributions from jazz luminaries including Herbie Hancock, Roy Haynes and Jon Batiste. It will light up Christmas Day, no problem, but I felt some residual disappointment, a lingering tinge of regret that it doesn’t have the courage of all its convictions.

Weirdly, amid all the glistening animation, layers of polished storyboarding, tidy life philosophies and zingy dialogue exchanges, what’s missing at the end, is a bit of soul.

Mon Oct 12 , 2020
An out-of-control boat in Florida ended up making a crash landing after going airborne over a dock in a moment that resembled a scene out of an action movie. The Martin County Sheriff’s Office said the wild scene unfolded Friday after three men said they were doing a “photo shoot” aboard the […] 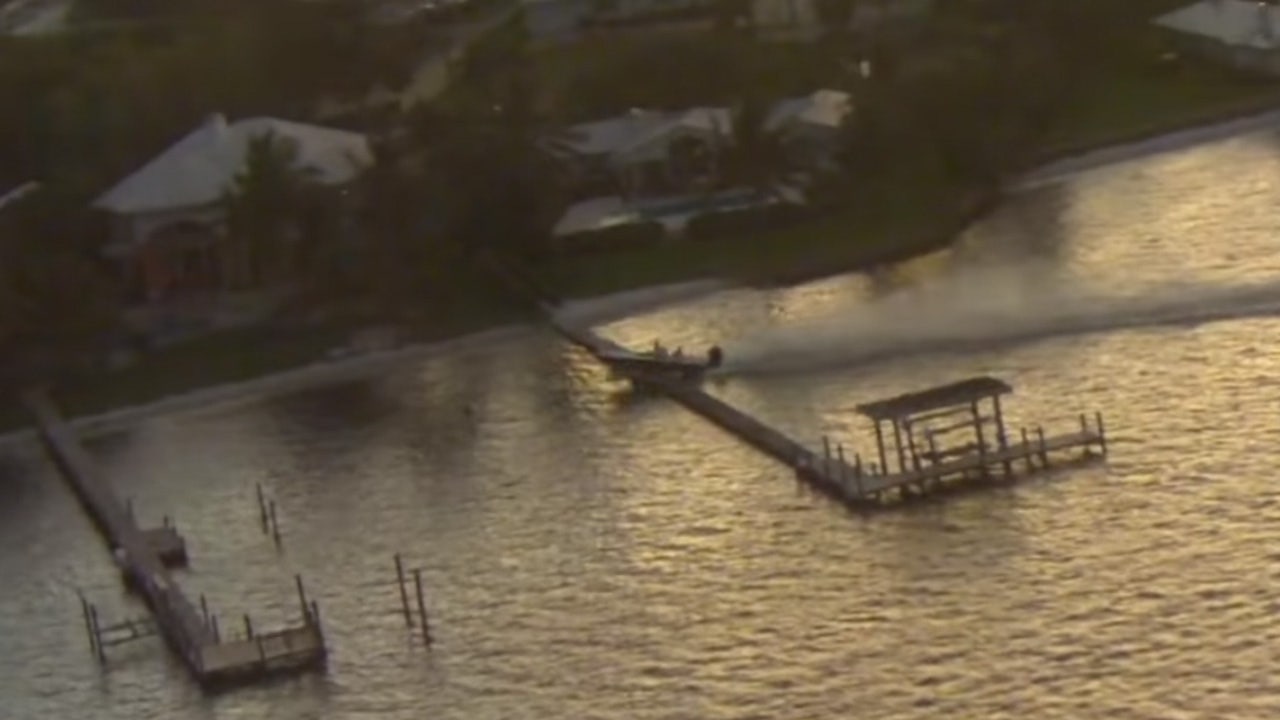