URBANA — A 25-year-old Fisher man who said he’d been using drugs and alcohol since age 7 was sentenced Wednesday to 30 months of probation for two separate crimes. “Even though you had a bad upbringing, you cannot use it as an excuse for the rest of your life,” Judge […]

URBANA — A 25-year-old Fisher man who said he’d been using drugs and alcohol since age 7 was sentenced Wednesday to 30 months of probation for two separate crimes.

“Even though you had a bad upbringing, you cannot use it as an excuse for the rest of your life,” Judge Randy Rosenbaum told Devon Todd.

In one, he pleaded guilty to aggravated battery, admitting that on March 25, he entered the Mahomet home of a man he knew and hit him so hard he broke his nose and caused him to lose consciousness.

He also pleaded guilty to aggravated fleeing and eluding for driving away from police who tried to stop him April 26 so they could investigate reports that someone in the vehicle was flashing a gun.

In both cases, more-serious charges were dismissed in return for Todd’s guilty pleas. He opted to have Rosenbaum impose sentence.

Todd’s attorney, Dan Jackson, had his grandmother testify about his difficult childhood; his girlfriend also testified that he’s a good father to their children when he’s sober.

Assistant State’s Attorney Justin Umlah argued for a prison sentence, saying Todd was on probation for a criminal trespass when he entered the Mahomet man’s home and that he wasn’t thinking of his children when he sped away from police.

Umlah noted that Todd had prior convictions for theft, battery and criminal damage to property and that he had blown several previous opportunities to get help for his substance-abuse problems while continuing to commit crimes.

Jackson argued that Todd had “faced a mountain of difficulty” in his short life and that his crimes were related to his drug addiction. He urged the judge to give him a chance to get help for that.

Todd told the judge he was grateful he had been arrested and said “I have never been this clean since the age of 7.”

Noting his strong family support, Rosenbaum agreed to give Todd a chance at probation and ordered him to get drug treatment. He also sentenced him to 180 days in jail but held it in remission until a Dec. 15 hearing so he could assess his progress.

Rosenbaum told Todd that if he hadn’t completed his drug-abuse evaluation and started treatment, he could assume he was going to jail on that day.

“Bring your toothbrush,” the judge said.

Fri Sep 25 , 2020
(Reuters) – Canada’s BlackBerry Ltd posted a surprise 6% rise in quarterly revenue on Thursday, as sales of its security software product rose and its patent licensing business strengthened. U.S.-listed shares of BlackBerry, which sells security software to companies and governments as well as infotainment software to carmakers, rose 6% […] 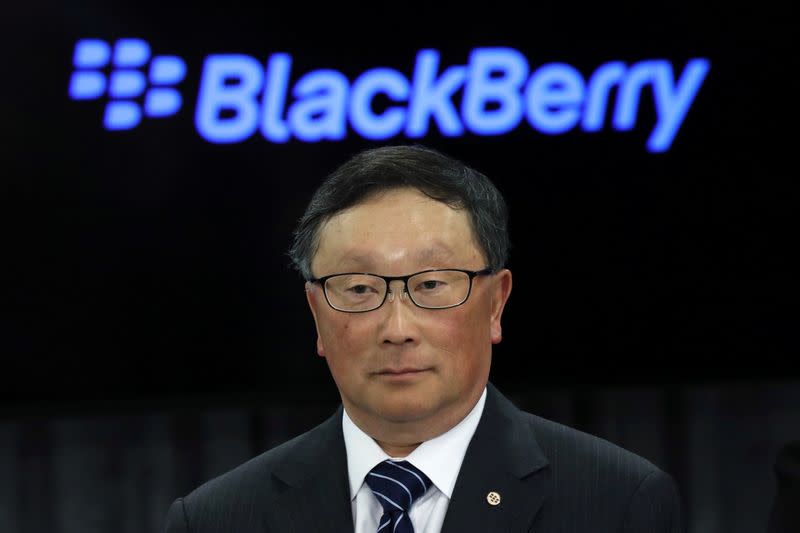