CLOSE Livingston County Chief Assistant Prosecuting Attorney Pamela Maas testified Wednesday she did not withhold evidence, prompt witnesses or threaten defense attorneys during the jury trial of Zachary Lally, a 21-year-old Genoa Township man convicted of rape.  Maas said she did not call a witness a “liar” nor prompt the lead investigator in […]

Maas said she did not call a witness a “liar” nor prompt the lead investigator in the case, Livingston County Sheriff’s Detective Greg Thompson, while he was testifying.

“What I can say unequivocally is that I was in no way trying to influence the officer,” Maas testified.

Attorney: ‘I have a minister of justice lying to the jury in a capital case’

The hearing is expected to continue Friday.

Kizer also claims Maas instructed Thompson on how to testify regarding the lack of testing done by the Michigan State Police Forensic Laboratory on Lally’s body and clothing.

The television in the courthouse’s attorney lounge was streaming live from Hatty’s courtroom on March 4. That day, Lally’s trial attorneys, Sizemore and Livingston, witnessed a conversation between Maas and Thompson concerning the testing over the video stream.

“We both stopped talking and watched the television, still from the table,”  Sizemore previously testified.

In the recording, Maas can be heard telling Thompson, “just say that we discussed it, and based on his [Sizemore’s] client’s statements, we felt we have enough evidence without it.”

Thompson testified a week later that Maas did not instruct him on how to answer questions about the testing.

Maas testified Wednesday Thompson was telling the truth because “I didn’t tell him what to say.”

She said she found out about the recorded conversation during Thompson’s testimony when Sizemore asked Hattyto approach the bench.

Neither Sizemore nor Livingston brought the recording to the court’s attention in the week before Thompson’s testimony, Assistant Oakland CountyProsecutor Danielle Walton argued. It came up while Thompson was on the stand.

After Livingston and Sizemore confronted Maas about the conversation, the three attorneys went into a meeting room to watch the video. There Maas told Sizemore, “You know Rolland, this is eavesdropping, this is a felony,” he testified.

Maas denied accusing the attorneys of committing a crime. Neither Livingston nor Sizemore have been charged with a crime.

“I thought it was pretty awful to have an attorney taping, photographing another attorney in the courthouse,” Maas testified. “And quite frankly I think there is an argument to be made as if it was a private conversation or not and it felt like eavesdropping… that they are recording a conversation that they are not a party to.”

Paul Walton also referenced Sizemore’s statement during the March trial in which Sizemore said, “I want to be very clear to the court I don’t think Ms. Maas has done anything inappropriate, I’m not saying that.”

The trial took place over the course of two weeks, starting on March 2 and ending with a guilty verdict on March 11.

The victim in the case testified that Lally raped her multiple times in the fall of 2018.

The Livingston Daily does not typically identify victims of sexual assault.

Lally is being held in the Livingston County Jail and faces up to life in prison. His sentencing hearing is adjourned pending the outcome of the evidentiary hearing.

Fri Oct 9 , 2020
(Reuters) – Charles Kolean, a Dallas investment industry worker, was thrilled to take a photo with President Donald Trump last week after the 25-year-old won a Republican fund-raising contest. U.S. President Donald Trump walks from Marine One as he returns from campaign travel to Bedminster, New Jersey, on the South […] 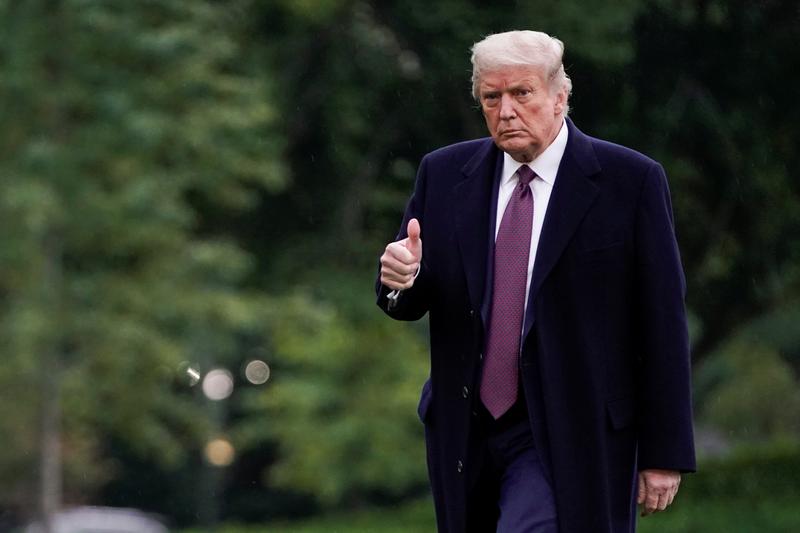