Sony cameras smash 50 MB/s barrier Sony’s PMW150 and PMW200 cameras boast 50 MB/s recording and have been approved by the European Broadcast Union for use – sending a positive message to broadcasters across the world HD sensors have been fitted to small cameras for over ten years. In fact, […] 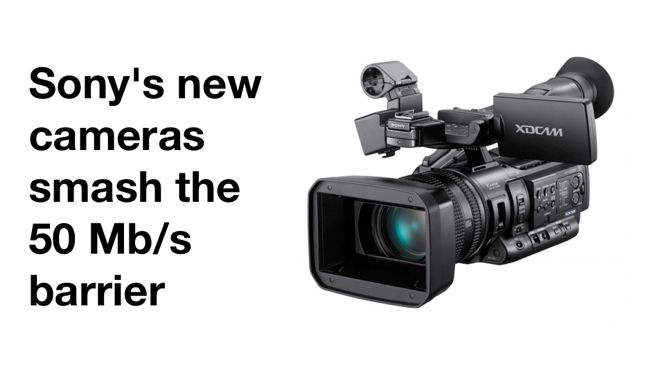 HD sensors have been fitted to small cameras for over ten years. In fact, you have to go back at least that long to find a sensor that was fitted to a still camera that had a resolution as low as HD. And that’s where the issue is: it’s the amount of data that HD video produces. To be more specific, there are two problems here: getting data off the sensor quickly enough, and finding somewhere to store it.

And that problem of where you store all that video data hasn’t gone away. But it has got better.

Only two years ago, there weren’t any ENG-style cameras that with enough storage to cope with 50 Mb/s HD files from a camera, so, although the quality was there, Sony’s previous line of cameras (PMWEX1 etc) maxed out at around 35 Mb/s. Unfortunately this was under the somewhat arbitrary but nevertheless strictly-enforced threshold of 50 Mb/s for long-GOP recording imposed by the EBU, and any camera that didn’t reach this level was effectively barred for long-form video production by the major broadcasters in Europe.

Canon has had 50 Mb/s cameras like the XF105 available for a while but for Sony diehards, the wait is now over. Both the PMW150 and PMW200 cameras not only record (to SxS cards) at 50 Mb’s, but have also passed the EBU’s stringent tests for quality. So broadcasters can now use these cameras in long-form video productions with confidence.

Conducted by Alan Roberts, the tests are available for download here, and are an education in themselves. Most importantly, Alan’s investigations reveal what – if any – signal processing is present, and he reveals the underlying nature of the pictures from the cameras.

What we are seeing here is a very gradual but important trend: As storage capacities and speeds increase, and prices decrease, it is more and more feasible to record higher bitrates internally. On the face of it this might be a blow to the nascent external recorder industry, but field recorder manufacturers have two reasons to perhaps take comfort: DSLR manufacturers have only recently started providing “clean” HDMI outputs from their cameras, and with more and more cameras moving towards 4K output, that provides a fresh, new market for 3rd party external recorders.

We will be testing these cameras soon. Watch out for the reviews in RedShark.

why does my car’s battery keep going flat?

Fri Oct 2 , 2020
If your car has developed a fault, or for consumer advice, turn to Honest John by emailing [email protected] It’s draining again Our 55,000-mile 2002 Honda Jazz Sport 1.4i DSI had a new battery in November 2017. This has run flat on two occasions over the past year, when the radio […]