The trial of a man accused of failing to get treatment for his son who ingested a deadly dose of methamphetamine more than two years ago started Monday in Jackson Circuit Court. At least two of the state’s witnesses testified they wished they had called 911 in time to save […]

The trial of a man accused of failing to get treatment for his son who ingested a deadly dose of methamphetamine more than two years ago started Monday in Jackson Circuit Court.

At least two of the state’s witnesses testified they wished they had called 911 in time to save the life of 8-year-old Curtis Gilbert Collman III, who died on June 21, 2018, at Schneck Medical Center. A toxicology report revealed the boy had 180 times the lethal limit of meth in his bloodstream when he died.

The boy’s 43-year-old father, Curtis G. Collman II, is standing trial on a Level 1 felony charge of neglect of a dependent resulting in death, a Level 5 felony charge of intimidation with a deadly weapon, a Level 4 felony charge of possession of meth between 10 and 28 grams and Class A misdemeanor charges of theft and pointing a firearm at another person.

Sarah Doty, who had briefly dated Curtis Collman II about a year before the incident and had remained friends with him, testified that on June 21, 2018, Collman had sent her texts and called her asking for help but would not tell her what was going on and why he needed that help.

She said she decided to go to the home Collman had moved into the day before on County Road 400N near U.S. 31 south of Seymour. Collman had custody of his son who stayed with him the night before his death.

Doty said she arrived at about 11 a.m. to find the boy having convulsions or seizures.

She said she told Curtis he needed to call 911 and when he didn’t, she picked up her phone to do so.

“He took my phone away,” Doty said. “He told me he would kill all three of us, and he was not going back to prison.”

She said he held a gun on her keeping her from calling 911 for quite some time. At some point during her time at the home, she said the boy was able to talk to her, recite his ABCs and even play”Itsy Bitsy Spider.”

Doty said when Curtis Collman II left the room, she left the house and took off in her vehicle.

She said the drive from Collman’s home to her home was about 25 minutes and she could have stopped and called 911 — something she said she wished she had done.

Tyler Waskom said when he was contacted by Doty about what was going on with the child, he wished he had called 911.

He said a few hours later he called 911 after Curtis Collman II called him and said his son had died.

Waskom, who said he had never met Collman but knew of him through others, said Collman also asked him if he knew how to get a hold of Doty. He also asked if Waskom knew how to contact April Williams, who had helped Collman move into the house the day before.

Collman’s court-appointed attorney Brian Chastain asked Waskom why he called 911 since he had been told by Collman the boy was dead.

Waskom said he was upset after learning the boy had died and didn’t know what else to do.

He also told Prosecutor Jeffrey Chalfant that he wished he would have called 911 after Doty called him the first time.

Curtis Collman II’s half brother, Donnie Farris Wright, also testified that his brother brought his son to the Wright’s home and asked him to call 911 to get help for his son.

Wright said Curtis Collman II also said he did not know what his son had gotten into to make him ill.

During the ensuing 911 call, which was more than seven minutes in length, Wright continued to ask dispatchers for help in saving the child.

During opening statements, Chalfant described the death of Curtis Collman III as something pretty horrible and his father had done nothing to stop it from occurring.

“The evidence will show he didn’t get help for his son and he could have,” Chalfant said.

Chalfant said Collman III had the meth and placed his son in a situation that would cause his death.

Chastain said in his opening statement the facts of the case are not largely disputed.

“It’s clear he ingested meth,” Chastain said. “Where he got it might be in dispute.”

Prior to the start of the trial, Collman asked Judge Richard W. Poynter to stop the trial from going forward because of his belief that Chastain has not been meeting with him enough or going over witness depositions, videos and over evidence enough.

Poynter said he had confidence in Chastain’s ability to represent Collman and told him he would have every right to appeal any conviction that might stem from the trial.

Wed Oct 7 , 2020
A “mystery creature” found at Padre Island National Seashore has left researchers at the beach a bit confused. They say they can’t tell if it’s a snake, eel or a combination of both. On Monday, PINS shared a picture on its Facebook page of the animal a visitor found at […] 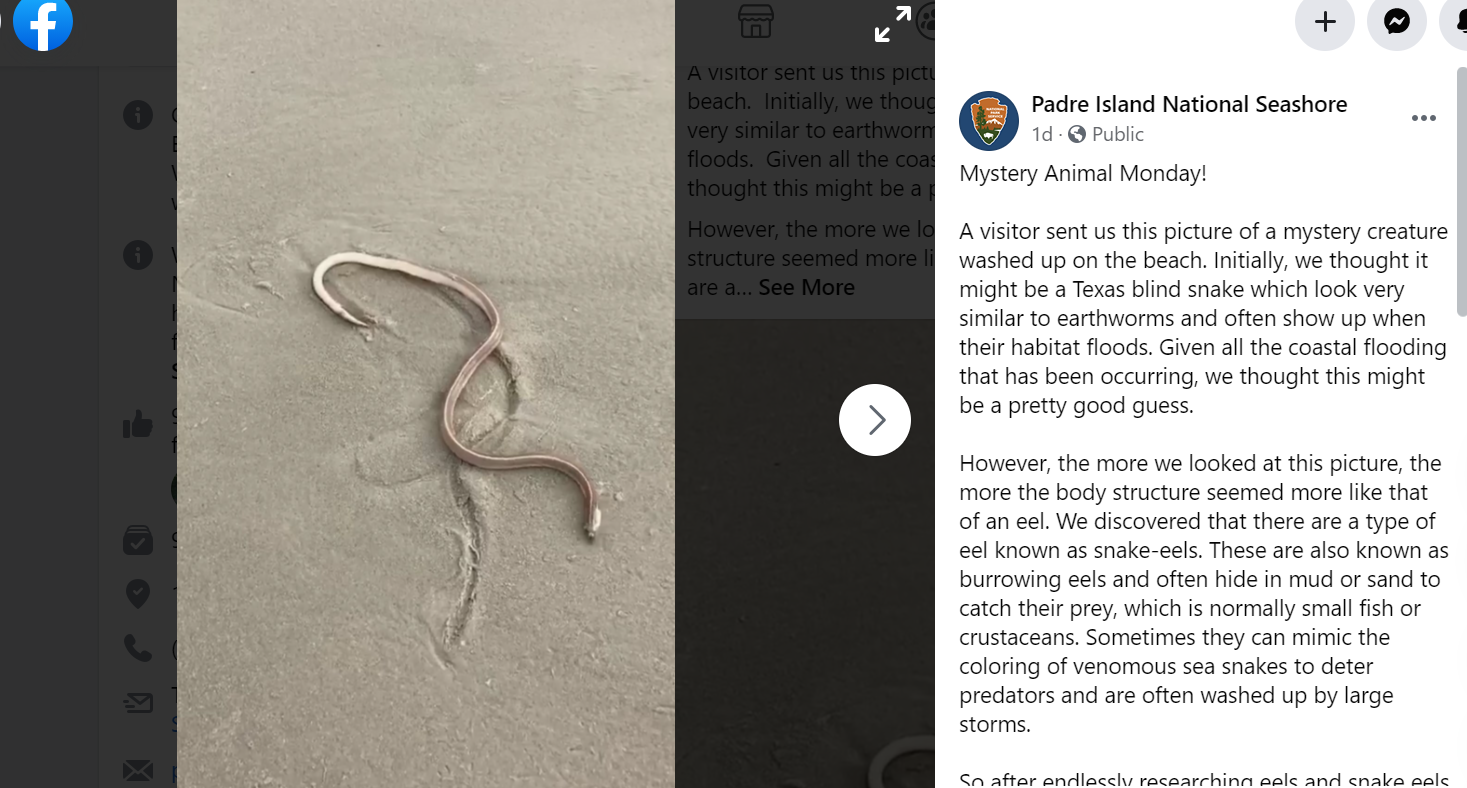