In this part of our Canon XF705 review we take a look at what this future-minded camcorder is like to use out in the field as well as take a look at picture quality. Read part 1 of this review here. In this final part of of review I wanted […] 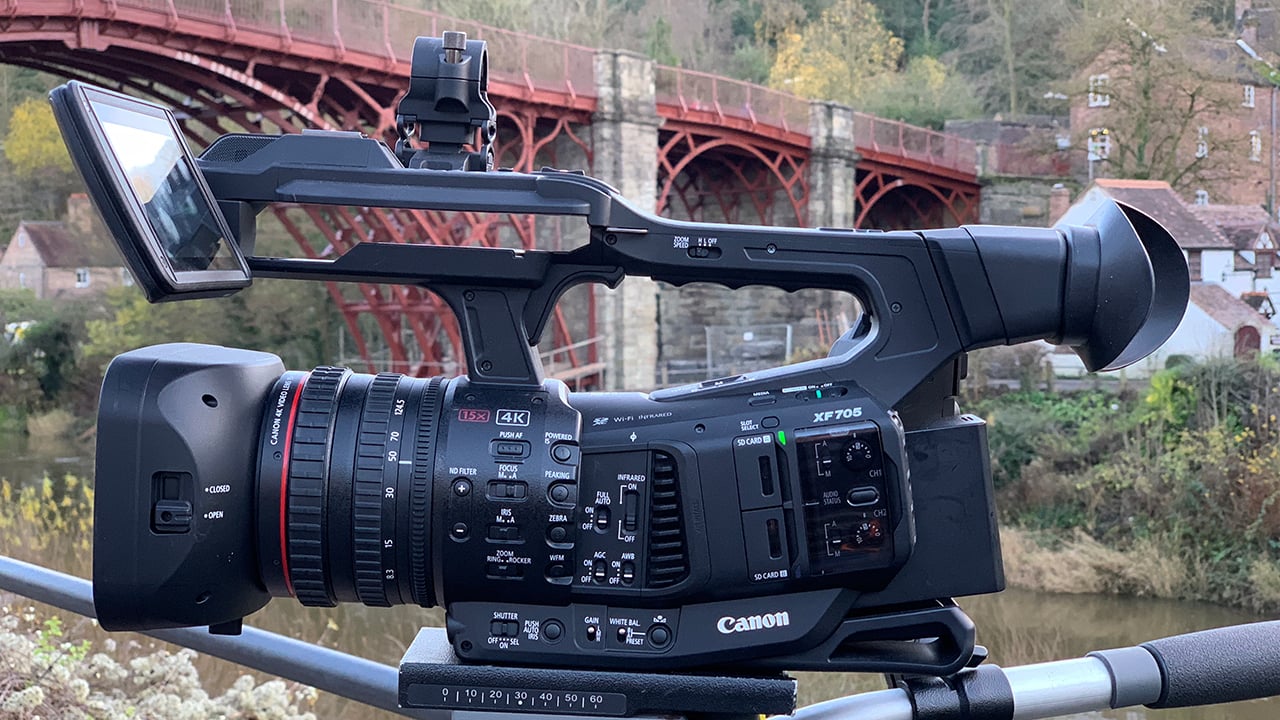 In this part of our Canon XF705 review we take a look at what this future-minded camcorder is like to use out in the field as well as take a look at picture quality.

Read part 1 of this review here.

In this final part of of review I wanted to put the camera through its paces with consideration to the types of use it might be put to. I didn’t have the camera for a huge amount of time, so I have focussed on the areas that I would consider important to news gathering, documentary, and other environments where getting the shot is more important than being Quentin Tarantino.

Start-up time and power on

As people who read my reviews know, I like to take a note of how long a camera takes to power on. The shorter the better, especially for a camera being used for news operation. The starts up in around 5-6 seconds, which seems to be roughly in line with other similar cameras of its type.

The left side of the body has a large vent for cooling, and while the camera does have a fan inside it is ultra quiet, and I could barely hear it unless I put my ear near to the body of the camera, which bodes well for interior interview situations.

For the brief time I had the camera I didn’t get to test it in any bright sunshine thanks to the peculiarities of our lovely British weather. However for the time I did use it I found the large LCD to be bright, sharp, and easy to use with very good colour accuracy. Similarly the OLED viewfinder on the rear of the camera has nice resolution and definition making it a practical solution. It’s good to see that these rear viewfinders are now being taken a bit more seriously by manufacturers even if they might not be the primary framing method most of the time. 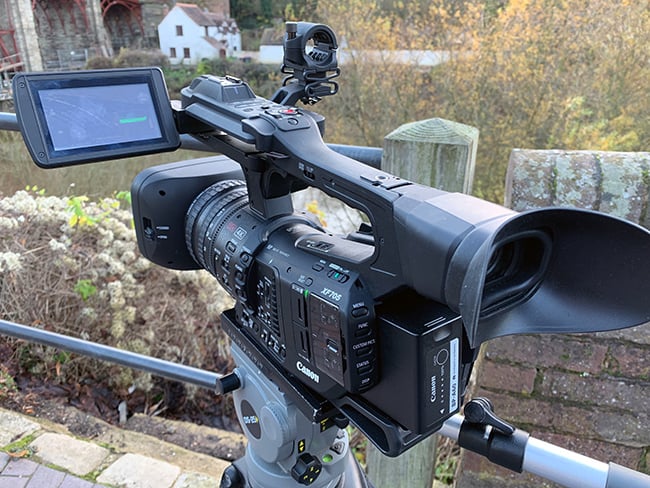 The weighs in at around 2.5kg. The camera feels good on a tripod, and even handheld it has good balance, if just slightly front heavy. One thing I liked was that because the LCD display is so far forward I could brace the camera against my shoulder, control the lens with my left hand, and use the LCD much like a traditional viewfinder. On other similar cameras I find I cannot do this due to the LCD being right against my face. But on the 705 the LCD distance is a very comfortable one for doing this.

In manual mode I found the lens controls (focus, iris, and zoom) nicely spaced out meaning that I could easily use it in the three fingered manner I used to use my coveted B4 lens cameras. If I could find something to pick up upon it is that I would like to see a faster servo response (since there’s no mechanical connection between these controls and the lens elements), and it would be good to see iris end stops on future models. But hey, we can’t have everything, and what we have here works very smoothly.

Handily Canon has leveraged the dual pixel auto focus system to display an assertive graphic that tells you when the object you are focussing on is bang on sharp. It doesn’t work all the time, such as in lower light situations, but when it does, which is the majority of the time, it is really useful.

Of course dinosaurs like me forget the auto-focus is the new manual in todays currency. On this front the AF705 performs very well indeed, with very effective face tracking, and the ability to just tap on the screen where you want to focus. The speed the autofocus works at can be tuned in the menu, so for example, if you want to do a nice smooth pull focus you can reduce the autofocus speed right down and just tap between the areas you want to perform the lens move. This is much nicer, faster, and intuitive than having to program in two positions before ‘replaying’ it with a button press.

Overall the autofocus is very effective indeed, to the point where I think that if I owned this camera even I would have to concede the use of my manual fingers most of the time. You can actually trust it, and you have full control over what and where it focusses on.

Zoom speed, both on the rocker switch and the lens ring control could be faster. You won’t be performing crash zooms with the XF705. I would like to see a finer control on the rocker switch since the movement starts a bit suddenly, making ‘creep’ zooms difficult to do. This could be something that may be fixable in a firmware update, but for those who perform such moves regularly it’s something to bear in mind. 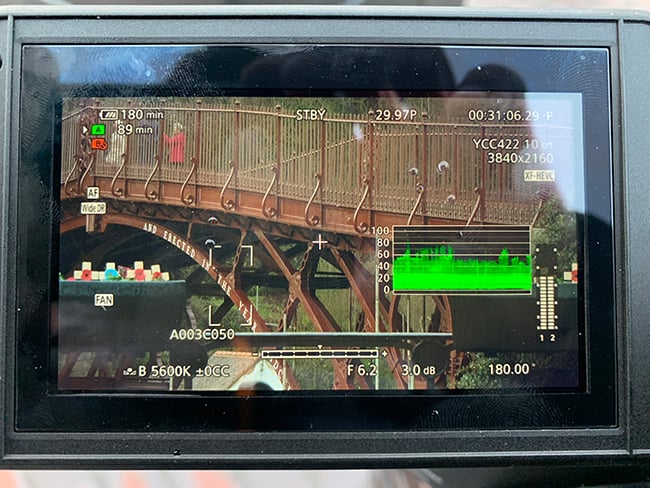 The XF705 has three modes of stabilisation for its 5-axis system. Standard, dynamic, and powered. Dynamic is the one you need to be using for movement such as walking, while powered is used when you are in a fixed position and don’t need to pan. It’s a very effective system. It won’t turn your shots into gimbal beaters, but it makes a very solid contribution to the smoothness of a shot.

I was supplied with two BP-A60 batteries packing 90Wh of power, and from what I was seeing during recording you should be getting over 3hrs of continuous power from such a battery.

For clarification from the first part of this review, the XF705 is the first Canon camcorder to record to the highly efficient HEVC (H.265) codec, but it isn’t your only option. HEVC is pretty processor intensive unless you have hardware decoding and encoding on your edit machine, so you also have the option of recording to the more traditional H.264 flavour to retain backwards compatibility with both hardware and NLE software.

HDR is full catered for, either recording to HLG for straight output, or PQ for grading afterwards. There’s also C-log 3 for recording to Rec.709 or Rec.2020. SDR wise there is a standard Rec.709 gamma, but as is becoming more common now there is also a wide dynamic range Rec.709 curve. Most of my footage recordings were made using this latter setting because it is, frankly, ready to go straight out of the camera.

As an aside, the XF705 can record HDR internally while sending an SDR signal out to an external recording. This is a bit more than simply a dual output. Canon has accounted for exposure differences, so you can compensate with negative or positive gain to ensure that the SDR signal isn’t under or over exposed vs the HDR one.

The image that comes straight out of the XF705 is a strong one. Canon’s colour science is incredibly good, and despite the grey weather I was seeing good deep, and accurate colours. Aliasing it would appear is non-existent, and issues such as chroma aberration would seem to be a none issue, too. A fixed lens camera such as this really does allow the manufacturer to tune the camera and lens for the optimum performance.

Dynamic range, while clearly not going to encroach on Arri Alexa’s territory, offers a good amount of latitude, especially in the wide dynamic range mode. Clearly you will get much more mileage shooting HDR, but for people in the here and now still shooting for Rec.709 this will give you some really nice images with minimum fussing around in post.

Low light performance is pretty good. I’m not sure what type of noise reduction Canon uses, but even at 18db the picture was perfectly usable, and in fact surprisingly free of objectionable noise.

In the brief time I had the XF705 I was impressed with what I saw. This is a camcorder that works both for the here and now, but will have a long shelf and work life due to the in-built considerations for the future, such as dual HDR/SDR recording, HEVC, and streaming over IP via the ethernet port. It’s a camera that fits into HD workflows now, but is ready for future 4K workflows tomorrow. For journalists it is a very easy to use device that can be used quickly with a minimum amount of fuss. The picture it produces is also amazingly good. I can see it being a very popular choice.

If you want to download some untouch files straight out of the camera, visit our XF705 footage folder.