WHAT’S the likelihood that a paper serving a city of around 150,000 residents would publish a regular column about bicycling? And for almost a decade? Not very likely at all. I’m certain there are cities of Savannah’s size where people regularly blog about bicycling, mostly for readers who are fellow […]

WHAT’S the likelihood that a paper serving a city of around 150,000 residents would publish a regular column about bicycling? And for almost a decade? Not very likely at all.

I’m certain there are cities of Savannah’s size where people regularly blog about bicycling, mostly for readers who are fellow cyclists. But I’m talking about a general audience publication that’s edited, printed, and distributed all over the city.

Of course, when Connect Savannah Editor-in-Chief Jim Morekis invited me to write a column about bicycling in May 2011, he knew it wouldn’t just be about bicycles. 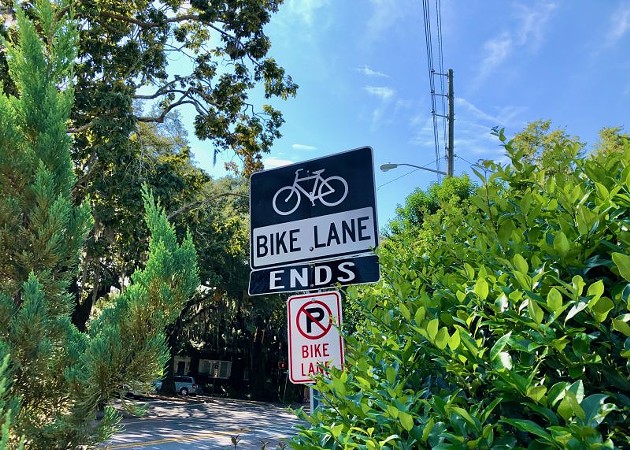 I’ve written the News Cycle just about every two weeks since then. It’s been a constant in my life, even as my circumstances have changed.

For instance, about two years after the column debuted, my cause became my career. When I started, I was an advocate volunteering after work and on weekends in various efforts to make our city friendlier and safer for people who travel by bike.

Now, as I write the final News Cycle installment, I’m a card-carrying member of the Association of Pedestrian and Bicycle Professionals. (Yes, that’s a real thing. No, they don’t actually issue cards.)

I’m fortunate that my passion morphed into my profession, and I’ve enjoyed writing about how walking and biking have changed the lives of people in our city.

I’m sometimes asked if it is difficult to find fresh angles on a fairly narrow topic, column after column. The truth is it’s not a narrow topic at all, again, as my editor astutely predicted.

Still, I’ve read back through the archives and I will admit I’ve repeated myself more often than I would like. On the flipside I am able to detect persistent themes that remain relevant.

At least that’s what I’m telling myself about why I returned to them so often. So, now, please allow me to play the hits:

• Not all biking and walking is recreational. While people may regard going out for a stroll or a bike ride as purely recreational activities, for many Savannahians walking and biking are straight up transportation. And often their only means of getting where they need to go. Our failure to make travel safe for them has had deadly consequences.

To make matters worse, when walking and biking are inaccurately perceived as exclusively elective, we misassign blame when someone is hurt or killed at a time and place where we would never dare to walk or bike.

“What was that fool doing out there on a busy street late at night?” someone will predictably comment on a news story about someone killed or injured while biking or walking.

They never consider the answer may be: They were trying to make it back home after a long day at work.

• We are blinded by our windshields. Those of us who are used to driving pretty much everywhere we go are often completely oblivious to the struggles of people who do not have access to cars, which in some Savannah census tracks can be more than 60% of households. Commuting to work or school, shopping for groceries, or going to an appointment are usually mundane parts of your daily routine when you can drive. They can be exhausting, time consuming, and hazardous challenges when you can’t.

And it’s not just everyday life that is harder for people who don’t drive. Our neighbors who don’t have cars are often excluded from full participation in civic life. Before the pandemic, I attended countless public input sessions on transportation projects that were held at locations that were virtually impossible to reach if you had to get there by biking, walking, or rolling.

A more recent example? Until the League of Women Voters of Coastal Georgia stepped in, only one ballot drop box was provided for all of Chatham County and it was deployed in a place that’s difficult and potentially dangerous to reach without a car.

Pretty depressing, huh? The good news is it’s not all bad news. Had it been, I couldn’t have continued writing this column for nine and a half years.

Here’s why I kept at it:

• Savannah has advantages other cities can only dream about. Those who’ve heard me say this before, perhaps dozens of times, please prepare to groan: There’s one person who has done more than any other to make our city safer and friendlier for people who ride bikes.

What’s even more remarkable, Savannah’s most effective bicycling advocate died before bicycles were even invented.

His name was Gen. James Oglethorpe.

His city plan makes the National Historic Landmark District and other parts of the city, where elements of his plan were emulated, wonderful places to bike and walk.

Though concessions to automobile traffic have made them less so. In his 2015 book, “The Oglethorpe Plan: Enlightenment Design in Savannah and Beyond,” Thomas D. Wilson makes the case that today’s planners would do well to study Oglethorpe’s work.

What about the Southside and other parts of the city designed around cars? We have an advantage in those places, too.

Other communities convert abandoned rail lines into trails, but as residents of certain neighborhoods often awakened by locomotive horns at 5 a.m. will tell you, Savannah’s rail lines are far from abandoned. Instead, the banks of drainage canals can be modified to serve as multiuse paths providing recreation and connections to everyday destinations.

This idea underpins the Tide to Town trail system, which will connect neighborhoods located near tidal marshes and waterways with the city core.

Our final advantage is topographic. While Savannah lags behind other cities when it comes to investing in sidewalks, bike lanes, and trails, we have — get ready to groan again — done an excellent job of keeping the ground flat. That means in Savannah people of all ages and abilities can bike, walk, and roll. That’s not true in places like Macon or Athens, where hills can be daunting.

•Everyone benefits from Complete Streets. Everyone.

Over the years I’ve received emails and letters accusing me of being a lobbyist for a special interest group and that I care only about people who ride bikes.

Shortly after the Savannah Bicycle Campaign (now Bike Walk Savannah) was founded in 2008, we began using the phrase, “Make Savannah better for bicycles!” as our rallying cry.

We soon realized we had it backwards and corrected it: “Bicycles make Savannah better!” More than 200 News Cycle columns later, I continue to believe this.

Open-Source Rocket.Chat Wants To Propel Communication To Next Level

Sat Oct 10 , 2020
Gabriel Engel’s goal in starting Rocket.Chat was to incorporate the good aspects of email into modern collaboration and communication platforms. Current iterations of those platforms have created silos, according to Engel, who says they’re tools designed just for team collaboration or inter-company messaging and not for customer communication, for example. […]