Sony AX53 Roland Denning takes a look at the new Sony AX53. It might not be replacing your main camera anytime soon, but as a second camera or one where you need an unobtrusive unit, it shows that the consumer end of things is catching up with the pros. I […] 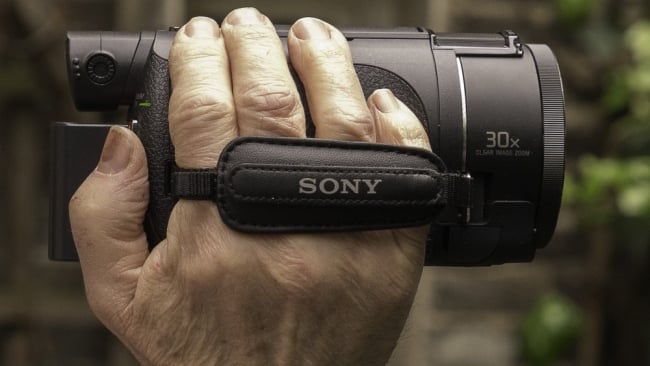 Roland Denning takes a look at the new Sony AX53. It might not be replacing your main camera anytime soon, but as a second camera or one where you need an unobtrusive unit, it shows that the consumer end of things is catching up with the pros.

I decided I wanted a small, up-to-date consumer camcorder, mainly for my own personal use, but I was also interested in the possibility of using it professionally, particularly when I need a discreet, quasi-covert camera for documentary use.

How well would it hold up to professional cameras, particularly if that 4K is downscaled to HD?

The line between pro and consumer is narrowing; in fact, the 1″ chip Sony pro PXW-X70 is based on the consumer AX100 camcorder. I chose the AX53 over the older AX100 because of its more advanced stabilisation, a longer zoom range and the fact I didn’t feel the need for a larger chip camera for the sort of uses I was going to put it to. The AX53 is also £600 cheaper.

The camera, which is about the size of a can of beer, feels solid and well made. Flipping out the viewing screen switches the camera on and opens a shutter in front of the lens which acts as a lens cap. You can see the whole lens assembly floating in the space behind as if it is gimbal-mounted. In addition to the flip out LCD screen, there is an viewfinder, invaluable for shooting in bright light; pulling this out and flipping it up also switches the camera on.

Quality aside, the main difference between consumer cameras and pro cameras is that the emphasis of the former is to make it as easy as possible to make good-looking pictures, whereas for the pro market the priority is maximum control over a camera’s functions.

I am used to using a manual ring on the lens to adjust focus and stop and rocker switch on the zoom; I rarely use auto anything. It’s good to see that the AX-53 has a manual lens ring for Zoom, Iris and Focus – but unfortunately, it is the same ring (it can also assigned to Exposure, Shutter Speed, AE Shift and White Balance Shift). Switching between manual ring functions is performed by a press button. It’s best to decide what you want that lens ring to control before you start shooting, because changing the ring function is fiddly; it is very easy to lose the setting you have made on the previous function.

Confusingly, if you adjust the Iris, you will find that Shutter Speed is still on auto and tends to compensate and vice versa. If you want to stop down or open up, you need to use the Exposure setting; you can’t set the Shutter Speed and then adjust the Iris manually (or vice versa). Annoyingly, the ring rotates in the opposite way to convention: anti-clockwise to stop down, anti-clockwise to focus closer. The zoom, if not operated by the multi-function manual ring, is controlled by a very small rocker switch which is, frankly, horrible.

Despite that this is obviously a camera that is designed to be used in auto mode, I was surprised and gratified that it does come with some assist functions for manual mode: zebra stripes for exposure (at 70% or 100%), peaking functions (selectable as red, white or yellow fringing) and centre-enlarge for focus. But, to be honest, I don’t think you are going to be doing much focus pulling on this camera (I tried – there are some rather shaky focus pulls on the included tests). Focus is via a rather sloppy servo and there are no markings on the lens, although the viewfinder does display distance to the nearest 10cm.

Apart from lens ring and zoom rocker, every other function, from white balance to audio levels, is controlled on the LCD touch screen. The screen itself is bright and sharp and the menus clear, but a lot of scrolling is involved: the main camera/mic menu has 6 sub menus, a total of 35 headings. Some are not that obviously placed; ‘Focus Enlarge’ is several lines away from ‘Focus Peaking’. Oh, for some assignable buttons!

One great disadvantage of small handycams is that they have always been far too light to be stable; they just bounce around in a way that a large shoulder-mounted camera never does. However, stabilisation system have come a long way. The AX-53 has what Sony calls a ‘Balanced Optical SteadyShot™ with 5-axis Intelligent Active mode’ (although you only get the full 5-axis in HD, not 4K). 4K (UHD) is limited to 25 fps (the camera comes as either PAL or NTSC, not both, so there are no options for 29.97 or 23.98 frame rates).

As well as having a built-in 5.1 channel microphone (only 2.1 in 4K), it has, thankfully, a stereo minijack input for an external mic (absent on many consumer cameras). To set the audio level manually, you have to negotiate through a few menus – not so great if you are accustomed to dedicated pots and meters on the side of the camera.

There are all sorts of functions on the camera I have not explored and are not likely to, like wi-fi functions, preinstalled background music, auto smile detection and a special mode for filming golf (yes, really). Nor have I played with any of the still picture functions.

So, what’s it like? After a few tests, I (reluctantly) relied mostly on the camera’s auto settings, just using the Exposure control to stop down a little to maintain highlights.

Playing the pictures back on a 4K TV, I was stunned; the pictures are bright, clean, sharp and vibrant, without looking overly processed, and the stabilisation, even in 4K, is very impressive. You can get acceptable hand-held shots right at the end of the zoom. My only real criticism is that the pictures are rather too crisp and bright, but judge for yourself. I’ve yet to check out its low-light capabilities or 100fps.

All shots ungraded but converted to 1080 HD:

This is, of course, a consumer camera. If you want maximum control over the image and subtlety, you will be disappointed, but if you let the camera give you what it wants to deliver, you can get some splendid results.

Conclusions? As a small camera to take away on holiday –  great. Could it replace a pro camera on, say, corporate documentaries? Despite the quality of the pictures, I would not be very confident using this camera on all-manual control, and manual control is essential for most pro work. Even shooting an interview, I want separate, dedicated controls for focus, iris and audio levels and a zoom control that enables you to inch in precisely.

However, as a second camera or an inconspicuous camera on observational documentaries, the AX-53 has a lot going for it. You can hand-hold the camera and zoom in tight and the stabilisation system will keep the shot surprisingly steady. And this is the interesting thing: in the right circumstances, you could get not only usable but impressive shots that you would be hard pushed to achieve from any professional camera.