The lack of federal planning also has left states with no standardized way to capture results from the new tests and include them in daily counts of infections and tests. Consequently, as the rapid tests become more widely distributed, the data and dashboards being used each day to guide the […]

The lack of federal planning also has left states with no standardized way to capture results from the new tests and include them in daily counts of infections and tests. Consequently, as the rapid tests become more widely distributed, the data and dashboards being used each day to guide the nation’s coronavirus response are becoming more inaccurate.

“This is data we need, and there’s just no way of capturing it,” Pennsylvania Health Secretary Rachel Levine said. “We need a reporting structure and not just hundreds of faxes being randomly sent from nursing homes and other facilities.”

Many states are trying to create their own way to capture and classify the new data. Epidemiologists say that piecemeal approach could result in differing data sets, making it harder to pinpoint where infections are growing most this winter when infections are expected to spike.

Fueling such problems, public health officials say, is the White House’s continued refusal to take responsibility for leading the country through the pandemic and to lay out an overarching strategy on testing, instead of repeatedly pushing that onus onto the states.

“It’s the utter lack of planning and guidance that’s creating problems,” said one state official, speaking on the condition of anonymity for fear that federal officials might retaliate by giving the state less aid. “Their approach is to just throw things over the fence to the states and to say, ‘Take this, and deal with the problem.’ ”

In interviews, Trump administration officials dismissed the complaints as baseless. Instead, on Monday, Trump held a briefing in the Rose Garden to boast about his administration’s deployment of the new tests.

“My administration has built the most advanced testing system in the world. There has never been anything like this,” Trump said. “Nobody could have done this.”

At a news briefing Friday, Assistant Health Secretary Brett Giroir dismissed complaints about false-positive responses. “We know with every test that there are false positives,” said Giroir, whom Trump appointed the testing czar in the spring.

Similarly, Giroir dismissed the lack of a standardized reporting system as a result of the administration moving swiftly to implement testing.

“If we wanted to get everything perfect, we would have waited months to do that. The important thing was to get these out to nursing homes now,” he said. “We’d rather save lives.”

On Monday, after receiving repeated complaints from state officials, the Trump administration said governors will be given more discretion to decide where future test shipments go.

In recent days, as coronavirus cases have begun inching up again, Trump has repeatedly hailed the new rapid tests, called antigen tests. Although antigen tests for other diseases have existed for years, such tests for the novel coronavirus have been available only since May. And the latest — now being deployed by the White House — was approved at the end of August.

“We’re sending hundreds of thousands of additional rapid tests to nursing homes,” he said at a news briefing last week. “The staff now is being tested on a very, very powerful and on a regular basis, but very strongly at the finest level, the highest level, and the best tests.”

His administration has sent more than 3.3 million of the newest antigen test — Abbott’s BinaxNOW — to nursing homes, disaster relief groups, historically black colleges and others, and has signed a $760 million agreement to acquire a total of 150 million of those tests.

Experts emphasize that despite problems with planning and distribution, the emergence in recent months of new antigen tests could significantly boost efforts to control the virus in the coming year.

The older coronavirus test — infamous for the sometimes-painful deep nasal swabbing required — is still the most widely used, but it is much more expensive and time-consuming. That polymerase chain reaction test — widely known as a PCR test — must be sent to a laboratory to detect the virus’s genetic material.

It remains the gold standard, because it can diagnose infections with even a small bit of genetic material. But shortages of chemical compounds used in PCR tests and backlogged labs led in the past to long wait times and delayed results.

Antigen tests are simpler, cheaper and often require no lab work. The latest version, the Abbott BinaxNOW, is a small card that costs $5 and can yield results in 15 minutes. Using a shallow nasal swab, the test yields results that can be read from the card like a pregnancy test — a color-coded line indicates testing positive.

The trade-off is that the new antigen tests are less sensitive and need more virus to be present in the body to generate a positive result.

Health officials knew the antigen tests could be less reliable. But in recent months, they have encountered more false positives than expected.

In Manchester, Vt., antigen tests manufactured by the company Quidel identified 65 patients at an urgent-care center as infected. But after health officials retested them using the more rigorous PCR tests, they found only four cases. The company has said it stood by the results and “found no testing site or product-related issues.”

“It’s not clear if it was problem with the machine, sampling or human error,” Vermont Health Commissioner Mark Levine said. Although several nursing homes in Vermont recently received the federal government’s shipments of antigen tests, Levine said state officials are holding them in reserve until they decide how best to use them.

In Maine, antigen tests used at a children’s camp produced about two dozen false positives, making it appear as though a massive outbreak was occurring. But when health officials retested the children with the PCR test, they found no infections. Some children had to be tested three times to be sure.

“I don’t want to overstate the problem, because it’s not like we should throw out antigen tests,” said Nirav Shah, director of Maine’s Center for Disease Control and Prevention. “What we need is more testing, not less.”

Shah and other state officials have pushed for the Food and Drug Administration and other agencies to investigate and determine why the false positives are happening.

They said they fear it could undermine public confidence in the tests and waste already-strained resources as health officials are forced to retest people with PCR tests and deploy contact tracers to fight phantom outbreaks.

State officials also have asked for clearer guidance from the federal government on the use of antigen tests.

Because of the tests’ diminished sensitivity, the FDA has approved them to be used only to confirm the coronavirus in people showing symptoms. But the Trump administration is deploying the tests more widely to screen asymptomatic people in nursing homes, on Indian reservations, at historically black colleges and in public schools — and told health officials to disregard the FDA policy.

Adding to the confusion, state officials say shipments have arrived with little guidance for those facilities about the circumstances in which the antigen tests can be used most effectively.

“There’s been little national guidance to say, ‘These are the best places to use them, this is what you do under various circumstances if you get positives and this is how to report the data,’ ” said Michael Fraser, chief executive of the Association of State and Territorial Health Officials, which represents state health departments. “We are still waiting to reach consensus on when and where health departments should use these tests.”

In a phone interview, a senior Trump administration official disputed that characterization. “I have no idea where these people have been hiding,” said the official, who spoke on the condition of anonymity because he was not authorized to speak publicly. The official said the administration has held weekly conference calls with state leaders and said health officials should raise concerns then.

Several state health officials said they have repeatedly highlighted problems in those meetings.

Under new rules issued by the Trump administration, nursing homes are required to screen at least once a month and as often as twice a week, or face citations or fines.

The problem is that nursing homes have little experience conducting such diagnostic tests and have no systems to report results to states offices. In recent weeks, some have neglected to send data, state officials say. Others are writing the information by hand and faxing or emailing it case by case, making the data painstakingly difficult to process.

That problem is likely to grow as the new rapid tests become more widely used in schools, doctor’s offices, workplaces and private businesses. Some states don’t report positive antigen test results, resulting in an incomplete portrait of the disease’s spread. Others have begun to categorize them as “probable” rather than confirmed infections.

Companies are developing antigen tests people can take at home. If they become widely available, Americans could administer the test themselves weekly or even daily, experts say. That could be a powerful weapon to stop transmission. But it would be a nightmare for recording data if a nationally standardized system is not established.

Without that data, the country would be flying blind as it navigates later stages of the pandemic, experts say.

“The government should be putting some of the onus on manufacturers to report where they are selling the point-of-care tests,” said Janet Hamilton, executive director of the Council of State and Territorial Epidemiologists. Because manufacturers are distributing the tests, they are best positioned to build data reporting into their tests. “It should be part of the licensing process to require that data be reported to public health in some automated way.”

Trump administration officials said one of the antigen tests they are distributing — the Abbott BinaxNOW — comes with a smartphone app that could help with data reporting. But the app isn’t an automated part of the test or required. It is not set up to send the data to health authorities and does not include the level of detail needed to be included in case counts, epidemiologists say.

State officials also note that the Trump administration has promised to provide only an initial round of rapid tests to nursing homes, some schools and vulnerable facilities. Some facilities say that without federal coordination, they could be left competing and bidding against one another — similar to the price gouging and competition involving N95 masks and personal protective equipment.

“I want to make clear we appreciate the federal government for sending what they have,” said Levine, the Pennsylvania health secretary. “But we have 693 nursing homes in Pennsylvania alone, and they’ve been sent enough tests to do only a few runs. It won’t last long. Where is the money going to come from to resupply them?”

Wed Oct 14 , 2020
With regular compact cameras going the way of the dodo, Canon is trying something completely different. It just unveiled the PowerShot Zoom, a “compact telephoto monocular,” with a design that looks like a golf rangefinder rather than a camera or camcorder. It’s designed not only to take 12-megapixel photos and […] 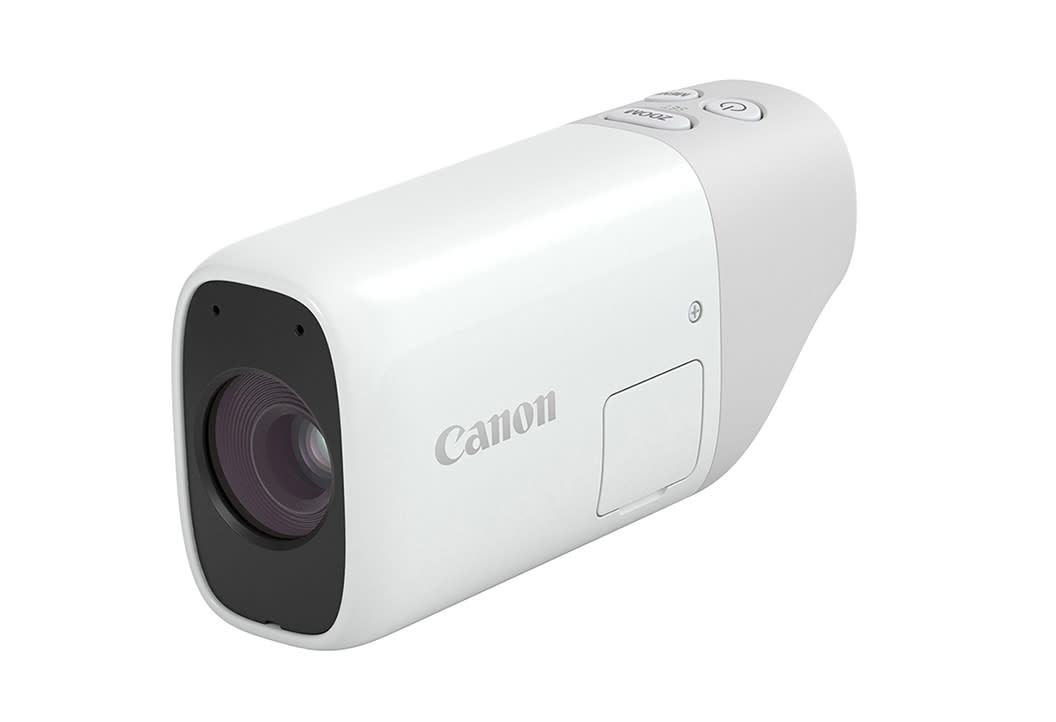