CLOSE At a time when traditional commercial fishing is threatening fish populations worldwide, U.S. officials are working on a plan to expand fish farming, known as aquaculture, into federal waters around the Pacific Ocean. (Jan. 6) Sen. Marco Rubio joined two of his congressional colleagues to introduce bipartisan legislation to […]

At a time when traditional commercial fishing is threatening fish populations worldwide, U.S. officials are working on a plan to expand fish farming, known as aquaculture, into federal waters around the Pacific Ocean. (Jan. 6)

Offshore aquaculture has been a contentious issue in Southwest Florida as environmentalists argue that a proposed pilot program 40 miles off Sarasota’s shoreline would exacerbate harmful algae blooms and pose a risk to wild fisheries.

The bill rides the heels of a recent Eastern District court opinion upholding the stance that the National Oceanic and Atmospheric Administration lacks the proper authority to oversea offshore aquaculture. The Senate bill, Advancing the Quality and Understanding of American Aquaculture (AQUAA) is meant to be the legislative solution.

A diver approaches a demonstration of a commercial fishing net pen by Ocean Era in Kona, Hawaii. The company seeks a federal permit so it can also conduct a demonstration of the technology in the Gulf of Mexico about 45 miles southwest of Sarasota. (Photo: Courtesy photo / Kampachi Farms,)

“Marine aquaculture presents an enormous opportunity for Florida’s economy and for the food security of our nation,” Rubio said in a news release. “I am proud to introduce this bipartisan legislation, alongside Senators Wicker and Schatz, that would streamline the rules for this important industry and responsibly promote its success.”

“What this does is creates a management framework and that’s what’s been needed,” said Neil Sims, CEO of Ocean Era – the company proposing the fish farm near Sarasota.

More: Opposition mounts against proposed fish farm off the coast of Sarasota

The Senate’s AQUAA legislation proposes to set up national standards for the industry by establishing areas of opportunity in federal waters, management plans for farms and permitting procedures. Environmental regulations are not laid out in detail within the bill’s language, but it requires offshore development be “consistent with environmental requirements established by law.”

Marianne Cufone, an environmental attorney and executive director of Recirculating Farms, said that while Congress providing authority to a federal agency is the right process, offshore aquaculture is a dirty and outdated industry.

“It’s especially concerning that Rubio is sponsoring the bill given that Florida residents have expressed tremendous concerns,” she said. “There’s been a tremendous amount of push back from communities in that area and it sounds like Rubio is just not listening.”

Recirculating Farms has joined other environmental groups in the Don’t Cage our Ocean Coalition to speak out against the proposed Senate bill.

“We need strong environmental leadership from both sides of the aisle in Congress to ensure that our ecosystems remain resilient,” Hallie Templeton, senior oceans campaigner for Friends of the Earth, said in a news release. “The last thing we should be doing is allowing corporations to dump even more toxins into our oceans by rubber-stamping these dangerous developments.”

And: Proposed fish farm in SWFL first of its kind in federal waters, draws concern

Margaret Henderson, campaign manager of Stronger America Through Seafood, said the bill is a pragmatic approach to an industry that is woefully needed in the country. Her group is an aquaculture advocacy group focused on federal-level changes.

“What’s really important about this legislation is it does not in any way alter existing environmental statutes,” she said. “All will remain completely intact under this legislation. Any of the impacts that would be associated with these operations would have to be legal and regulated under these statutes.”

A community demonstration in January at the corner of Ken Thompson Parkway and John Ringling Parkway in opposition of Ocean Era’s request to build a fish farm 45 miles off the coast of Sarasota. Opponents to the project again vocalized their concerns during a virtual hearing on Wednesday. (Photo: Thomas Bender/Herald-Tribune)

“People are concerned about factory farms on land, why would they put them in the ocean?” she said. “There are just so many concerns and risks associated with this type of production that it seems unnecessary to undertake those kinds of risks.”

Aaron Welch, a researcher at the University of Miami, said he understands the risks of harmful algae blooms but doesn’t believe the proposed Ocean Era fish farm poses an environmental risk.

Welsh released a study in 2019 that found there was no significant difference in nutrient pollution in the water near a fish farm in the Caribbean Sea. Welsh and his fellow researchers monitored the farm, which produced 1,500 tons of fish each year, from 2012  to 2018.

“Gravity is pulling us in the direction of aquaculture,” he said. “Right now, at the scale we are talking about, in my view there is nothing to worry about.”

There is certainly, at some point, an upper limit to how many farms could exist in offshore waters, he said, and there are certain species of fish, such as non-natives, that he would not want to see raised.

“I would want to see reasonable regulations by the government, responsible regulation practices, both with the state and feds,” he said. “In general, I am comfortable with aquaculture. It’s the future. The U.S. can choose to do it or not, but the horse is out of the barn everywhere else in the world.”

The Don’t Cage our Ocean Coalition held a meeting Wednesday to raise awareness about the group’s concerns.

Sarasota Mayor Jen Ahern-Koch attended the meeting, according to a report from the Sarasota Herald-Tribune, and raised concerns that even the proposed pilot program would exacerbate Florida red tide.

The Senate’s AQUAA bill is not the first time a federal aquaculture framework has been proposed in the Capitol. Cufone said different forms of offshore fish farming acts have been pushed forward since the ’80s.

“There’s been attempts over time (to pass this type of legislation), but they failed at every juncture,” Cufone said. “Every time it comes up there is an immense amount of public opposition that has stopped it.”

Regardless of the legislation passing, the current permitting process allows companies such as Ocean Era to move forward with offshore farms.

“We can proceed under the exiting legislation,” Sims said. “But it would be nice to have the framework and national management plan that gives industry participants comfort and it’s what the county needs, it’s what the planet needs.”

Tue Oct 6 , 2020
The Texas Central Railroad project reached two major milestones Monday, laying the foundation for the high-speed railroad system. HOUSTON — Houston is one step closer to having the first high-speed railroad system in the United States after two history-making accomplishments for the Texas Central Railroad project. The U.S. Department of […] 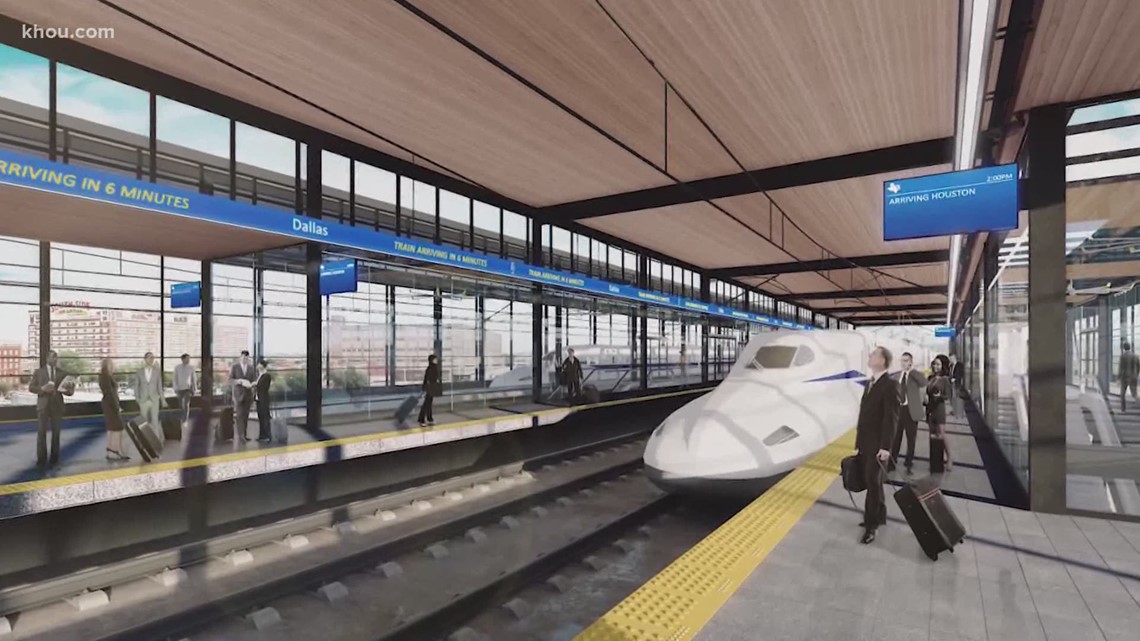