The IFI’s Documentary Festival gets under way this week, and next Saturday there will be a special screening of a remarkable new film by Davy Rothbart and it could hardly be appearing at a more pertinent moment. Filmed over 20 years, 17 Blocks charts the experiences of one African-American family […]

The IFI’s Documentary Festival gets under way this week, and next Saturday there will be a special screening of a remarkable new film by Davy Rothbart and it could hardly be appearing at a more pertinent moment. Filmed over 20 years, 17 Blocks charts the experiences of one African-American family in a tough Washington DC neighbourhood – the title refers to its close proximity to the grandeur of the US Capitol.

Remarkable for its vision and intensity, 17 Blocks is also unusual in its execution, because from the start Rothbart involved the Sanford-Durant family in its creation, giving them his cameras so they could film themselves at home. The results are startling, and a quiet indictment of a society that routinely abandons its less fortunate to their fate.

It all started with a chance meeting, as Davy explained to me when we spoke via Zoom last week. “In 1999, I was living in DC. I lived nine blocks behind the Capitol building, and 13 blocks behind it was this basketball court where I went to play every day, and that’s where I met Smurf. I was probably around 22, and Smurf was 15, but we’d play a lot of basketball together and his little brother Emmanuel would hang out, looking through the fence, begging to play.

“Me and Smurf kind of hit it off and he invited me over to dinner one night, and I got to meet his mom Cheryl and his sister Denise, and I sort of just started hanging out with them.

“The way Cheryl likes to describe it is that the family adopted me, and that was kind of how it felt: I was living far from home for the first time, and they were nice enough to take me in in that way.

“I’d just got my first video camera, a little handheld camcorder, and me and the family kind of learned how to use it together by just messing around. I would interview them, and then we would roam around the neighbourhood filming stuff, but I saw pretty early that Emmanuel just had a poetic eye, he was really interested in the camera, so I started leaving the camera there overnight and on the weekends: he shot great stuff, and some of it is the really intimate family moments you see in the movie.

“At first there were no plans to make a movie, and for a very long time it was almost like home video, but that all changed when Emmanuel passed away.”

Single-mother Cheryl is very honest in the film about her own battle with drug addiction, and her elder son Smurf would turn for a time to dealing: the only means he saw of keeping his family economically afloat in a neighbourhood bereft of opportunity. His younger brother Emmanuel, meanwhile, blossomed into a handsome, clever young man, a scholarship student with his whole life ahead of him. But in 2009, when armed criminals came to the family home looking for Smurf’s money, 19-year-old Emmanuel confronted them, and was shot dead. “I was home in Michigan at the time,” Davy recalls, “and I came back to DC the next day and went over to the house to see what I could do to help and Cheryl said to me, ‘where’s your camera?’. The way she saw it, so many people in her neighbourhood had died in this way, and the story had to be told.

“What was different here, she told me, was that Emmanuel’s entire life had been documented on camera, which would make him more than a number or a statistic, and a film might help people understand the human loss behind these deaths.

“I knew she was right, and so we kept on filming for days and weeks and months and in fact for 10 years after Emmanuel’s death.”

The scenes at Emmanuel’s funeral are heartbreaking, but more poignant still is the moment when Denise crouches in the family hallway, using a cloth to wipe her brother’s blood off the wall. “I remember filming that moment,” Davy says, “and I think at one point I stopped to help her. It just seemed so f***ed up. And that is part of the tragedy of what is happening in these American neighbourhoods. It’s not enough to do everything right, you know – just by your zip code, you are condemned to a series of challenges that are going to make it extremely hard for you to prosper.”

Cheryl is a fascinating character: you can see she likes the camera, and admits that she dreamed of being an actress in her youth: she smiles and does not disagree when her kids call her a diva, but her insistence on honesty in the depiction of her family’s life is impressive.

“It takes a special kind of courage to be willing to show all of yourself on camera,” Rothbart says. “But after Emmanuel died and we realised we had a deeper product on our hands, she said I want us to always capture the full truth of every moment. And when we were editing it, she said to me, where’s the time that you filmed me using drugs? Drug addiction is ugly, she said, and just me talking about it isn’t enough, I want people to see it.”

Things have looked up for the family. Smurf now manages a convenience store. “He’s made an incredible transformation in the last few years: he’s a great dad, and especially now during the pandemic, he’s doing heroic work to keep that neighbourhood store going.”

The family, Davy says, are delighted that their story is being widely told, and that Emmanuel’s memory is honoured. And 17 Blocks is a powerful film, unique in its storytelling. “Yes,” Davy concludes, “but I do think wonderful things happen when you put the cameras in the hands of the people and let them tell their own story.”

’17 Blocks’ screens on Saturday, September 26 at the IFI at 8.40pm, as part of their Documentary Festival, which begins on Monday

Sun Sep 27 , 2020
DONALD Trump has mocked Joe Biden by sharing a post calling the former vice president a “flashlight with a dying battery.” The president slammed the 77-year-old Democratic presidential candidate on Tuesday afternoon by sharing a clip of podcasting king Joe Rogan. ⚠️ Follow our US election 2020 live blog for the latest news […] 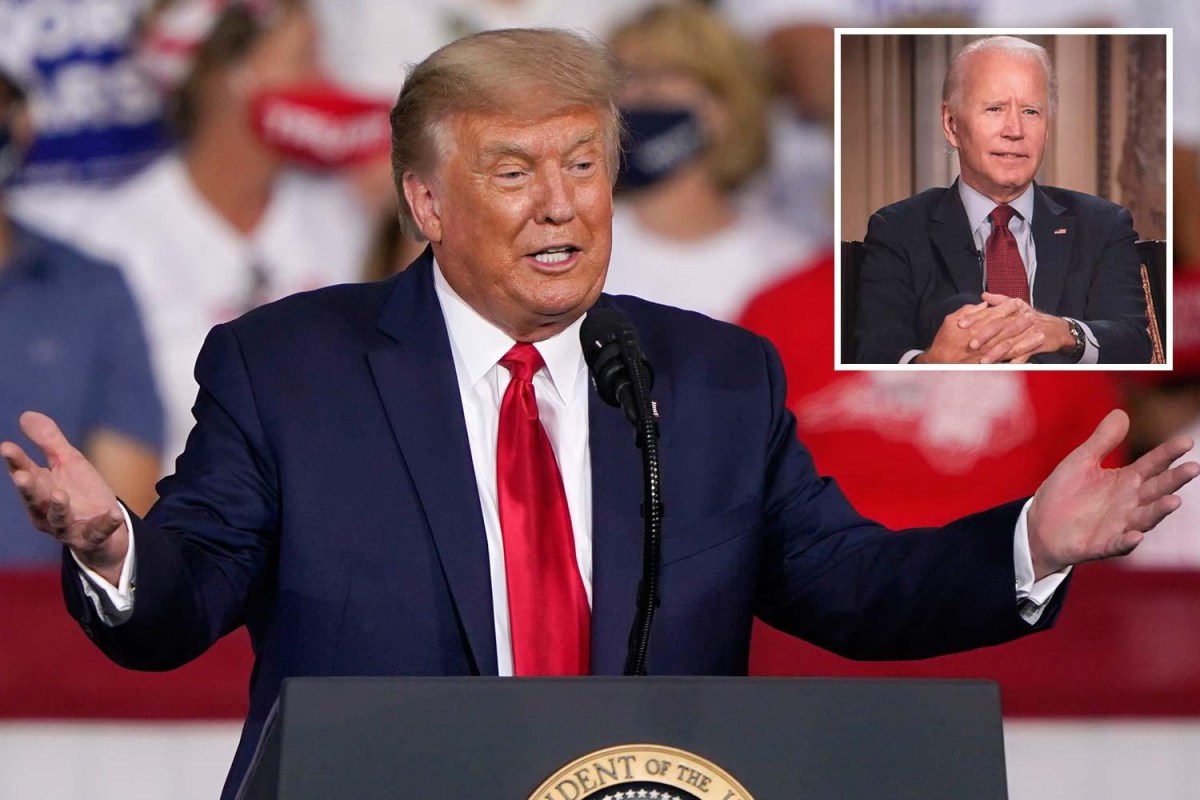