Imagine waking up to an email asking you to make the video for the biggest pop star in the world. It’s for her comeback single – she’s seen your stuff and she likes it. That’s what happened to Andrew Onorato. The Aussie animator and illustrator is the guy behind Billie […]

Imagine waking up to an email asking you to make the video for the biggest pop star in the world. It’s for her comeback single – she’s seen your stuff and she likes it. That’s what happened to Andrew Onorato.

The Aussie animator and illustrator is the guy behind Billie Eilish’s ‘my future’, directing the clip – which has had almost 50 million views on YouTube – alongside his talented production team at the Melbourne-based Chop Studio.

A bit of a fan himself, Andrew says he’s been blown away by the reactions from the rabid Billie fanbase.

“It’s unreal,” the 28-year-old tells triple j. “The amount of fan art I saw within a day or two;  hundreds of people all commented on YouTube and Instagram who had avatars that were just screenshots from the video was pretty nuts.”

So how does one wind up working with one of the biggest names in music? Andrew makes it sound easy.

“I was contacted by two awesome producers from Interscope Records (who represent Billie) and asked if I wanted to create a music video for her upcoming song. I said yes.”

“The initial direction was quite loose and up for interpretation. I submitted a few ideas, which went through a bit of back and forth but were eventually crafted into something everyone was happy with,” he explains. “Most of my initial pitch is in the final piece.”

Billie Eilsh might be the latest and biggest thing Andrew’s done, but his CV boasts some seriously cool shit.

He’s worked on videos for Childish Gambino, Tash Sultana and Matt Corby, and Hot Chip, but if you scroll through his website (sure to induce nostalgia in anyone who remembers the early days of ‘The Web’), you’ll find lots more projects outside of music.

Andrew’s Geenie Reenie shorts have been selected for film festivals worldwide, and he was approached to animate shorts for the Fallout videogames and indents for Adult Swim around Rick & Morty and Decker.

The latter was “pretty sweet” given Andrew’s a Tim Heidecker stan, even crafting his own videogame tribute to the Tim & Eric prankster Spagett.

“That game took me like 6 years to finish,” he reveals. “On and off for a few weeks at a time every six months.”

A screenshot from Spagett and the Quest for the Golden Treasure

More recently, Adult Swim tapped Andrew to be involved with YOLO: Crystal Fantasy, from the creative Ciggy Butt Brain of fellow Aussie animator Michael Cusack (aka the guy behind viral hits like Damo And Darren and the triple j textline short)

“I helped out storyboarding a few episodes,” says Andrew, “as well as illustrating a few backgrounds and playing some bongos on one of the songs.”

Of all his work thus far, Andrew is proudest of ‘my future’, saying he’s had more creative control working with Billie Eilish than on previous projects.

“It was really refreshing to have people just trust someone they hired… I kept waiting for a wave of massive feedback and it never came, which showed they trusted my vision and were really into the idea and concept. Producers take note!”

Let’s go back. How did Andrew get started doing what he does?

Growing up with Disney ~classics~ (“Aladdin and the King of Thieves, The Lion King 1½, Hakuna Matata etc.” lol), he always had an interest in animation, and was big on early internet user-generated communities like Newgrounds, StickDeath, and NeoPets.

“I remember trying to work out how to make animations in MS Paint back in Grade 3 (hint: you can’t). Then one day when I was maybe in Year 7, I realised there was a program called Macromedia Flash MX Professional, which I was able to get a copy of. Then, basically I spent my spare time throughout high school making shitty flash cartoons and games instead of doing my homework. Turns out I made the right choice.”

So, what advice would he give to anyone looking into getting into doing what he does for a living?

“Honestly, I think the most important thing you’ve got to get right is learning how to actually draw. Draw things around your room. Go to life drawing workshops as much as you can. Learning specific software comes much later. If you’re just a good artist, you can apply those skills anywhere.”

In future, Andrew’s skills are going towards short films that “are currently in various stages of completion”, and helping fellow animator Jarrod Prince with his short Olive Place, which “should be out later this year.”

He’d also love to get a mini-series up and running based on one of his original characters.

“I’ve got this little prick called Smoke Dog, who’s a blue dog who smokes cigarettes and throws rocks at cars when he’s bored. I’d love to do something with him.”

“I’d love to do more music videos,” he adds. “They’re usually nice neat little jobs that heaps of people get to enjoy so that’s always fun. Hearing songs before they are released also gives you a little bit of a high, but after hearing the song hundreds of times over the course of the project you sometimes never want to hear them again.”

With Billie off the bucket list, Andrew’s dreaming of doing clips for Angel Olsen, Cat Stevens, Mark Sultan, or Paul McCartney. “That would be very sick. Gimme a ring Pauly!”

From Billie to a Beatle?! You’ve gotta make your own future, responds Andrew, when asked if he’s an ambitious person.

“I’d say so! I think I’m pretty hungry for bigger jobs and doing sick work for people. I see a lot of people with so much talent that just seem a bit disillusioned with the whole industry but there’s definitely a lot of laziness there, as well as self-doubt.”

“I guess I never thought I WOULDN’T work with such big names, why would you think that? It seems dumb and counterproductive to me, but I know people that do think like that.”

And if all else fails, well, he’ll put time into starting his joke pet project: “A two-hour long animated feature for Crazy Frog. Big fan.”

Mon Sep 28 , 2020
Georgia was back to practice on Wednesday afternoon without Jamie Newman for the first time and thanks to the SID department in Athens, we have photos from the practice.  QB, JT Daniels, Photo by Tony Walsh UGA Athletics JT Daniels jumps to the front runner position to become the starter […] 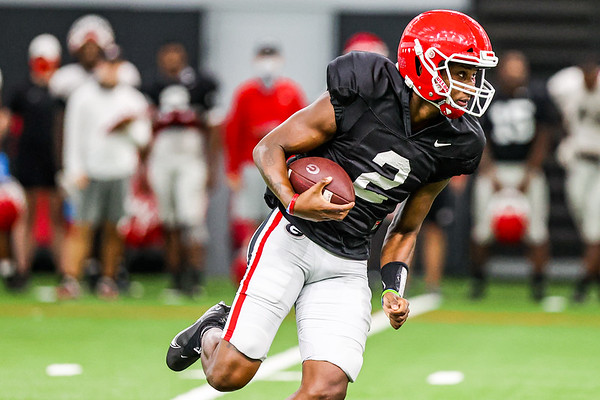