Microsoft’s Xbox Series X and Series S preorders went live on Tuesday, capping a rough week of product rollouts that included similarly messy situations for preordering Sony’s PlayStation 5 and buying Nvidia’s RTX 3080 graphics card. The next two months are, without a doubt, the most pivotal hardware launch season the video game industry has seen in almost a decade. But for some reason, the biggest names in interactive entertainment can’t seem to solve the simple task of giving consumers an easy and straightforward way to exchange their money for a product.

Why, in the year 2020, are companies as large, experienced, and well-funded as Microsoft, Sony, and Nvidia still failing at preorders? It’s an especially puzzling question when companies like Apple, Samsung, and even Facebook-owned Oculus seem to have figured out how to properly manage expectations and sell a new in-demand device without turning it into a stress-inducing scramble.

We still have no idea how many units any of these companies intended to sell, how many they allocated to each retailer, or to what extent they plan to restock at any point this year. Right now, if you don’t have a confirmation email in your inbox for a new PlayStation or Xbox, or receipt for an Nvidia RTX 3080 card, you may not get your hands on one until 2021. Everything is “sold out,” with little to no information on when the situation may change.

Why these companies can’t seem to competently sell their most important products is a more complex question than it seems, as it’s not explained by sheer incompetence alone. These are major brands that have been selling products for decades with long-standing retailer relationships, supply chain management expertise, and vast amounts of data to source from when trying to predict consumer demand and manage global inventories.

Yet, as we’ve seen in the last week, this would not appear to be enough for console makers and major PC gaming players like Nvidia to solve the puzzle. The aftermath of preorders for the PlayStation 5 and Xbox Series X and S going live, as well as the initial wave of sales for Nvidia’s RTX 3080 graphics card online and in select stores, has been nothing short of a disaster. It’s created confusion and disappointment at a time when businesses like these should be celebrating such robust consumer interest in their products.

The PS5, Xbox Series X, and RTX 3080 preorders and sales have been utter disasters

Even Microsoft, which watched Sony and its retailer partners completely fumble the initial batch of PS5 preorders, had a somewhat rough go of it on Tuesday, although it was a far cry from the chaos of Sony’s initial batch. Microsoft prepared fans well in advance with proper timing for when Xbox Series X and Series S preorders would go live in their region, throwing shade at Sony all the while. But when the pages went live, errors and other hiccups began to skyrocket.

Many consumers reported issues securing orders from Best Buy and Target, with Xbox consoles disappearing from shopping carts and issues processing payments during crucial slivers of time before the product pages listed the items as “out of stock.” Others said the Microsoft Store was experiencing similar problems before also reporting “out of stock” messages across the entire Xbox lineup, including the new Xbox All Access subscription. Many of these problems are the same issues that plagued Sony.

Stranger still is that these companies seemed to be surprised by the sky-high demand, even though they should have been well aware. Nvidia publicly apologized for its disastrous RTX 3080 launch, saying, “We were not prepared for this level, nor were our partners.”

The company claims its website received 10 times the traffic it did on its previous-generation launch of the RTX 20 series and that some of its 50 or so retail partners saw more interested buyers visit their websites than on Black Friday, causing all manner of issues with order processing and site crashes.

Nvidia’s new graphics card also seemed to be uniquely targeted by automated bots run by apparent scalpers eager to turn around and flip the newly available product on eBay and other marketplaces, forcing Nvidia to go so far as to manually review orders to ensure they went to legitimate customers. We may see a similar rush to hawk overpriced PS5s and new Xbox consoles come this November when both devices officially launch.

All three companies apologized for the messy launches, but how did they not see it coming?

Sony apologized, too. “Let’s be honest: PS5 preorders could have been a lot smoother. We truly apologize for that. Over the next few days, we will release more PS5 consoles for preorder – retailers will share more details,” the company announced after the initial wave of preorders, which some retailers pushed live a day ahead of schedule and sold out immediately. “And more PS5s will be available through the end of the year.”

But ignoring the fact that retailers haven’t meaningfully restocked those consoles, Sony’s statement alludes to perhaps the most frustrating element of this fiasco: the lack of transparency. With record demand, companies like Microsoft and Sony could very easily implement a lottery system or any other manner of fairer preorder processes. Or they could allow retailers to disclose how many consoles they have, among other ways of helping manage consumer expectations.

For instance, the Oculus Quest 2, which went on sale last week and starts shipping on October 13th, is simply backordered by about a month in the US and Canada. Instead of telling people a product is “sold out” and hoping they’ll check back at the right time without any idea when that might be, Oculus is transparent about when it expects the product to arrive and is still taking orders. Apple does the same every year when it launches new iPhones, smartwatches, tablets, and other devices.

Instead, the video game industry and its intense culture of corporate secrecy means consumers don’t know when anything will happen. Sony claims “more PS5s will be available through the end of the year,” without offering any concrete details as to what that means — including how many, through which retailers, and whether those units will arrive on or around launch day or perhaps weeks or months after. Microsoft did the same on Wednesday morning, saying “more consoles to be available on November 10th” without any indication of where, including whether Microsoft means limited in-store options or more consoles for online retailers.

The primary issue at play may be one of misaligned incentives. The video game industry is fiercely competitive, and a primary motivator for even companies as large as Microsoft and Sony is getting to signal to investors, analysts, and consumers that a product is flying off the shelves and almost impossible to find. Immediate sellouts for these companies is a positive development because it means demand is higher than supply, and they don’t have to worry about producing units that sit unsold on store shelves or retailer warehouses.

Creating a narrative of scarcity also helps build excess consumer demand, even when the intention is not to outright restrict the number of people who can buy the product. Brands like Nintendo, to which a prolonged sense of scarcity is core to its business model, are able to drive interest in products by signaling that they may be hard to find for months or years to come.

We’ve seen time and again how Nintendo would rather produce too few of an item, even a major console like the Switch or the retro-fueled NES and SNES Classic, than produce too many or try to accurately predict demand. Nintendo is even being openly blatant about the short time frame in which you can buy its new classic Mario bundle, Super Mario 3D All-Stars. You have until around March 31st, after which Nintendo will presumably remove it from its eShop, and physical cartridges will become pricey collectors’ items.

Meanwhile, retailers just need to sell all of the units they can, and there’s not very much incentive for those companies to fix their websites or try to implement a proper digital queue when a website that works only some of the time during a mad preorder rush is sufficient to make that happen. GameStop seemingly tried a virtual waiting line with Xbox preorders, but savvy onlookers discovered its queue wasn’t even real. The company was just telling consumers not to refresh the page in hopes it would keep their servers from melting, all while an automated script refreshed the page every 30 seconds.

For the non-tech savvy: Gamestop tried to limit the strain on its servers by telling people they were in a queue and to ABSOLUTELY NOT REFRESH THE PAGE OR YOU WILL LOSE YOUR SPOT IN THE QUEUE

on a page in which the code makes the page reload itself every 30 seconds https://t.co/42PDiN5FQ8

Soon enough, we’ll no doubt see the console bundles, the doorbuster deals, the Black Friday flash sales, and all manner of other retailer tricks that try to get you in the door and sell you stuff you don’t need. Amazon, Best Buy, GameStop, Target, and Walmart don’t have a good reason to care whether they have enough units to satisfy demand — and demand is great enough that they won’t for many months. The next priority is making the most of the situation. When people keep checking back online or visiting physical retail stores because they don’t know when units will arrive, each time is an opportunity for a retailer to sell other products.

Beyond the misaligned incentives is a lack of communication. We don’t know how many units these companies intended to produce, whether they will be more or less than the last console or graphics card launch, or whether that’s the result of shoddy logistics and planning or deeper issues like supply chain roadblocks and COVID-19-related manufacturing and distribution delays.

We don’t know if the companies or retailers anticipated situations like the ones that played out this past week or if they were all as genuinely surprised as they tried to sound in tweeted-out apologies. It’s hard to believe a megacorporation when they say they’re sincerely sorry you had trouble giving them money in exchange for a product.

Nvidia is promising it will continue to manufacture and ship new RTX 3080 GPUs to its partners and that it is “increasing the supply weekly.” But the RTX 3070, a slightly less powerful and less expensive version, goes on sale starting on October 15th, when the same ordering disaster might repeat itself. The same may be true in November when the new consoles launch and retailers inevitably reserve some for doorbusters and perhaps Black Friday deals to incentivize consumers to pick one store over another.

In an ideal world, this would be a solved problem, just as Apple has streamlined the process of selling as many iPhones as it can every year. But the video game industry doesn’t have much to say about how it intends to fix this, and it’s not clear these companies even care to try.

Thu Sep 24 , 2020
Tamarin Credit: Chameleon Games With the year we’re having, I can’t think of many better gaming comfort foods than a brand new 3D platformer. Tamarin, a simultaneous PS4 and PC release (with an Xbox version currently in development, according to the official website), was created by indie team Chameleon Games. […] 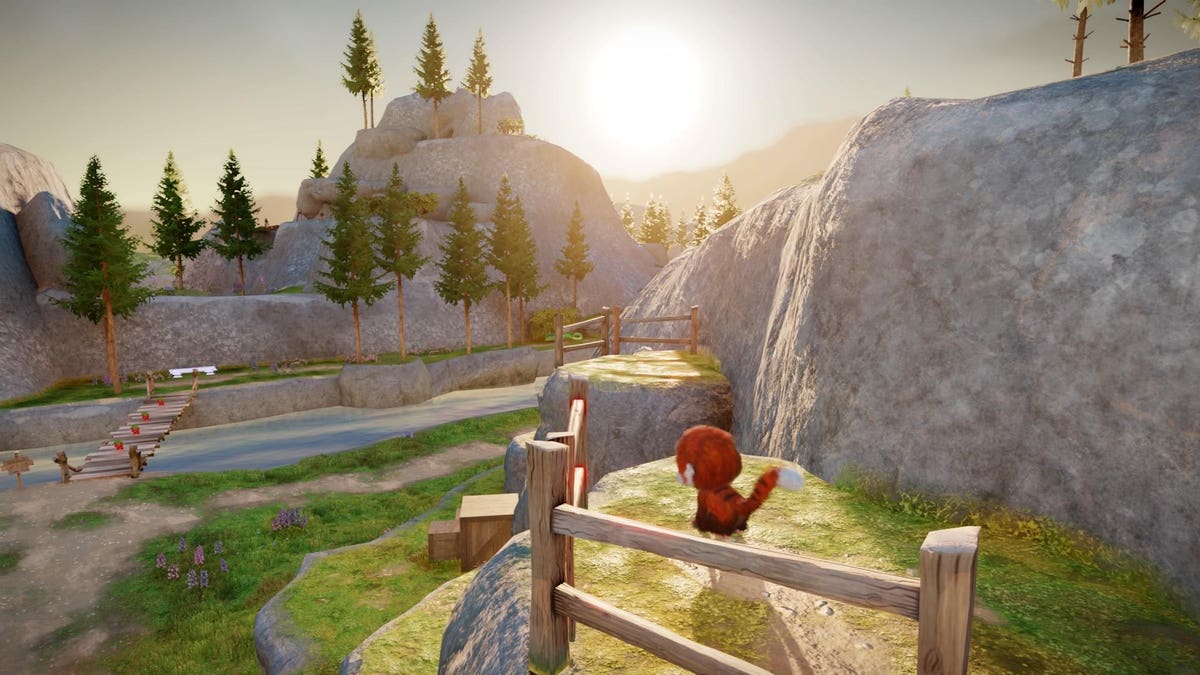